2 Edwards and a Henry (and a mysterious big cat) 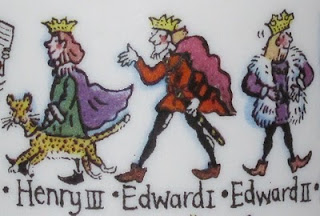 Henry III
He became king at 9 years old, but ruled until he was 56, which is probably why he isn't drawn as a child. He was dominated by more forceful men throughout his reign. He let his in-laws and half-siblings run riot and the barons disliked him almost as much as they had his father (King John, the much hated king who signed the Magna Carta).

Of course the real question is, why does he have a leopard? Maybe it's a cheetah? Maybe it's a lynx? It's certainly not a house cat. Why is it there? Starkey doesn't mention it, but there must be a reason! Does anyone know?

Edward I
Known as the Hammer of the Scots (pictured without hammer, or Scots), Edward was a strong king who made himself incredibly popular with his people. He established regular parliaments as a good way of raising taxes for his various wars. These wars involved removing the Welsh princes, fighting the French, and taking the Stone of Scone from the Scots. He was pretty obsessed with conquering Scotland, hence the nickname. He didn't subdue the northern nation, but he did cause them a lot of grief.


Edward II
Edward lavished money and attention on his special favourites, who became figures of hate among the barons. Like his father Edward II tried to invade Scotland, but failed miserably. His wife Queen Isabella -fed up with marital neglect- eventually joined with her lover to seize the crown for her eldest son. Edward II was the first king to be deposed, after which he was locked away and quietly murdered. Poor guy.

Email ThisBlogThis!Share to TwitterShare to FacebookShare to Pinterest
Labels: history