Yes to Gay in YA

Earlier today I found out about two YA authors who were told to change the sexuality of a character via Juliet E. McKenna's blog.

I read quite a few teen books for work as I help run a teenage reading group. In fact I was at a discussion and making recommendations only a few hours ago.
As I read the above posts I realised I could think of quite a few good books about homosexual teens. These were books that covered a variety of genres and explored relationships between friends, families and couples. Most of the books I can think of are American, so it isn't as though the US market for YA publishing is devoid of this kind of diversity.
As the article says the existing books need to increase their profiles so that agents and editors can see that haven't a gay character isn't toxic to sales or approval. 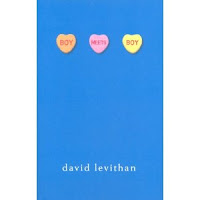 "There isn't really a gay scene or a straight scene in our town. They all got mixed up a while back, which I think is for the best! And whether your heart is strictly ballroom or bluegrass punk, the dance floors are open to whatever you have to offer. This is my town."

This is a book about relationships and high school romance, regardless of sexuality. Paul lives in a very accepting and open environment (one which the adults at work who read this book found a little unrealistic, although the teens didn't have a problem with the setting). Paul is best friends with a girl called Joni, however their friendship is under stress due to Joni's new boyfriend. Paul himself is trying to keep away from his ex, Kyle, and is falling for new boy Noah.
The only character who faces real problems because of sexuality is Tony, who comes from a different town and has religious parents. The group of friends help Tony to be more accepting of himself and do not understand the way his parents treat him. Tony's parents are portrayed fairly, they are worried parents who want to do the best for their son and Tony explains to his friends that their strictness is a sign of their love for him.
An enjoyable and mostly lighthearted read.

This fantasy book is a different take on the Cinderella story. Ash grew up near the wood and like her mother she is able to see the fairies who live among the trees. Ash ends up living as a servant in her stepmother's house in the city, but even then she is still able to contact the mysterious man from the woods who grants her wishes, for a price. She also meets Kaisa, the King's Huntress, a woman who inspires her to escape her dreary life and follow her desires.

This story is clearly inspired by the fairytale but is also very much it's own thing. The setting feels European, but a bit more modern than the traditional pseudo-Medieval fantasy world. The wish granting man from the woods is a far cry from any fairy godmother. He is cold and aloof and his wishes are only granted with a strict price. The death of Ash's parents and her attachment to her childhood home are strong factors in her story. Her uncertainty about what she wants from her life and her slow acceptance of love make Ash a more realistic figure than the normal Cinderella-type character.

I read this back in July and mentioned it in an earlier post on this very blog. For my full review click here.
I believe it is the only book in this list that features mostly non-white characters. The setting is based on Chinese history and it seems safe to assume that all the human characters are south east Asian.
Technically it's a distant prequel to Ash, set in the same world- though I find it hard to understand how a society based on feudal Japan would turn into a society that feels like early-modern Europe. There are some details in common but the two books feel different enough that they could be standalone. I suspect the story involves aspects of fairytales, although to me it mostly felt like a quest fantasy with a well-written romance plot. 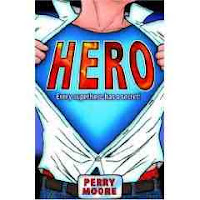 Thom Creed is used to being an outsider, his father is a widely hated ex-superhero after his failure to prevent a disaster. Thom doesn't want to disappoint his father, who lives in disgrace and was also abandoned by his wife. However Thom is not only gay, he also has a superpower and wants to join the League that spurned his father. Thom secretly tries out as a superhero and joins a junior team and must try to keep all the different parts of his life from colliding.

This is a story that works very well as a piece of superhero fiction. It addresses both official, super-powered heroes and unpowered, unofficial vigilantes. There's all the mystery, secrecy, action and danger you would expect from a well plotted superhero story. Told from Thom's point of view the story addresses two different ways of living with a secret. Thom has both his sexuality and superpowers to worry about, as well as recurring family problems and dangerous superhero politics.
Posted by Catherine Hill at 23:24