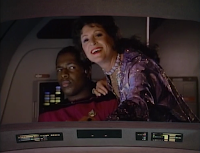 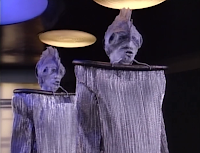 Rarely-seen, purple emissaries are being transported to a conference on the Enterprise. A formal welcome party (and Wesley) greets them, even though they're in the self-induced coma their species uses for space travel. Wesley judges their odd looks and pokes about in their food containers. Worf thinks they're handsome (cos Klingons are weird, don'tcha know). Pulaski asks O'Brien to store them in the transporter room for a bit, like cargo. Troi senses her mother, as Worf reports a small ship approaching. Lwaxana interrupts her pilot's hail to announce herself, as Data receives orders from Starfleet granting her full ambassadorial status. Deanna begs her mother not to embarrass her, and Lwaxana announces to everyone that Picard is having naughty thoughts about her. 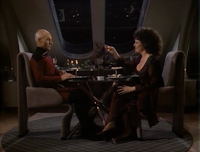 Picard and Riker greet ambassador Troi. Lwaxana is confused by transporters, calls the captain by his first name, comments that the purple emissaries look like food, and generally embarrasses her daughter (she's a diplomat, don'tcha know). She invites Picard to dinner and has telepathic conversation with Deanna in which she tells her daughter that she's sizing Picard up. Picard does his best to be formal. Riker, Data and Wesley gossip about ambassador Troi, and Picard tells them to treat her as an ambassador. The captain assumes others have been invited to dinner and goes in dress uniform, he's surprised and uncomfortable to discover it's just the two of them and Lwaxana is in seduction mode. At first Picard tries to make small talk, then calls Data and uses him as a distraction. Lieutenant Data, moment killer. Picard praises Data's after-dinner conversation, as a telepath Lwaxana should surely see past this. The scene is funny with Picard's discomfort, Lwaxana's frustration and Data's obliviousness all working well. Deanna tells Pulaski that her mother is going through a "mid-life" period in which Betazoid women become fully sexualised, it's parallel with menopause. Deanna wonders if she should warn Picard, but an amused Pulaski tells her not to and they joke about hunters and hunted. Deanna goes to Lwaxana's quarters, finds Data giving a slideshow presentation, and is gratefully greeted by her bored mother. Picard and Data leave, Picard breaths a sigh of relief and thanks Data. Deanna questions her mother about her condition.

Deanna and Riker tell Picard about the sex drive of the Betazoid female in mid-life. Picard decides to make himself scarce and hides in a Dixon Hill programme on the holodeck. The Dixon Hill game gets violent and Picard tries to edit the programme to be more relaxing, but the Computer doesn't understand - it thinks being threatened with a tommy gun is more relaxing than being threatened with a handgun. When Picard objects the Computer points out that the programme parameters are set by the original novels. It's as though 1940s noir isn't a relaxing environment.
Annoyed that Picard is unavailable on 'ship's business' Lwaxana tells Deanna she has a backup plan, which worries her daughter. In the transporter room Worf admires the comatose emissaries again, and Wesley attempts to reassure Worf about his looks and doesn't do it well. Lwaxana comes in and assesses both Wesley and Worf. Wes is too young and though Worf is appealing she's gotten used to human men.
In the Dixon Hill game Picard talks to Dixon's secretary, goes to a bar, talks to a bartender, and takes a while to grasp the period details. There's the suggestion of a plot within the programme, but we don't get to see that, just Picard bumbling in a trenchcoat.
The emissaries are transferred to sickbay (finally) and are slowly coming out of their comas. Lwaxana comes to the Bridge and Deanna has a warning telepathic conversation with her, but the ambassador blithely ignores her daughter's concerns. Lwaxana announces that she and Riker are engaged, even though Riker has barely spoken to her and had no idea. Deanna tries to object, but Riker stops her. He goes to tell the Captain and Data asks to join Riker in the holodeck.

Picard is still chatting in the holo-bar when Riker and Data (in costume) arrive. Riker explains his predicament. Lwaxana asks the Computer where Riker is and it leads her straight to the holodeck. When she enters the holo-bartender, Rex, is impressed, he and Lwaxana flirt and she announces she'll marry him. Riker and Picard decide not to tell Lwaxana Rex isn't real straight away. Pulaski calls Riker away because the emissaries are fully awake, and ravenous. Picard starts to tell Lwaxana about Rex.
Lwaxana tells Deanna she's annoyed about the Rex situation. As they're all going to the same conference Lwaxana is told she can beam down with the purple emissaries. Lwaxana states that they're assassins, their minds are easy to read and their robes are lined with explosives. Data confirms it and Worf takes them away. Lwaxana seems hardly concerned about saving the conference and beams down.


Oh Captain, My Captain
Picard's awkwardness at Lwaxana's attentions is amusing, and his use of Data as a diversion works well. His instinct to hide from Lwaxana seems unlike him though. Even though he's been told that Lwaxana will take rejection badly I would have thought he could speech his way out of it, that is his superpower. The Dixon Hill holodeck programme, based on a series of noir novels, provides a change of scenery and costume, but otherwise isn't interesting as anytime anything dramatic happens Picard freezes the programme and complains. I'm surprised Picard would go there to relax, especially since a crewmember was nearly/possibly killed last time.

Fringlish
Picard tries to keep things proper and formal with Lwaxana, treating her as a ambassador and awkwardly ignoring all emotional and sexual suggestion. It's a very British reaction... for a Frenchman. 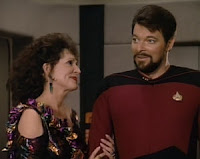 Riker is all very amused when Lwaxana's interested in Picard, and I suspect he joins Deanna's explanation of her mother's condition just to see the look on the Captain's face. Of course when he's told she's marrying him (like daughter, like mother, maybe) Riker stops Deanna from talking to her mother about it and hurries to join Picard in the holodeck. He tells Deanna that Picard should speak to Lwaxana. I can't say I understand his thinking there, Picard's been hiding from her and Deanna is her daughter. Deanna calls him a coward, which is fair enough here. Riker joins Picard in being very amused when Lwaxana is interested in Rex, it's partly relief I'm sure, but also they seem kinda smug about it too. 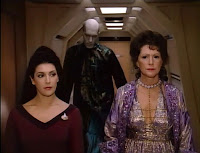 Troi is understandably embarrassed by her mother, concerned about her mother's behaviour, and less-understably angry at the way her mother is handling her mid-life condition. Troi tells Picard that the "only dignified option" for her mother is to focus on one man and make him her husband, which is what Lwaxana is doing - though one could dispute her methods. I am deeply confused about how this option is either dignified or the only one. I mean Betazoid society must be set up for this and have mechanisms in place for mid-life women who don't have partners. Betazoids seem open and accepting, and I'd gotten the impression that casual sex is perfectly acceptable in Star Trek, so why not for Lwaxana? Surely that's better than entering into a marriage based on sex-drive alone? I can understand Troi's embarrassment at her mother's scheming, but she's the one who suggested that Lwaxana is no longer capable of accepting rejection. I can see the humour in the situation, but it feels as though Lwaxana is being judged for her desire and sexuality, and I can't help thinking that the treatment would be different for a younger character. The saving grace is that Lwaxana seems utterly unaffected by any judgement, is never shown as vulnerable and retains an independent attitude.
The telepathic mother-daughter conversations show how weak Deanna's wishy-washy empathic powers are. I suspect that Lwaxana's telepathy is badly impaired, otherwise she'd know Picard was using Data as a distraction, she'd know Riker had no intention of marrying her and she'd know Rex wasn't a real person.


Security Breach
Lwaxana can't find Picard while he's in the holodeck because Troi and Riker cover for him. When Riker goes to the holodeck Lwaxana finds him by asking the computer, which not only tells her but guides the way. If a senior crewmember wants to avoid someone can't they just tell the computer not to give away their location. It's fairly harmless here, but what if someone came onboard to assassinate a crewmember, the computer leads them straight there. Speaking of which...
Shouldn't the transporters scan for explosives and stop potential assassins from bringing them aboard? It's lucky the B-plot was so half-arsed that Lwaxana could easily read the alien's intentions, despite her telepathic difficulties. If they'd wanted to blow up the ship they could have easily done so.

Future Fashion
I like that Starfleet dress uniforms are actually dresses. 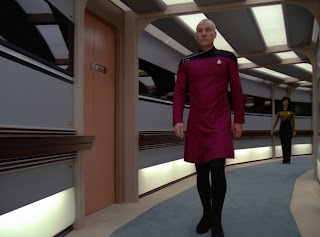 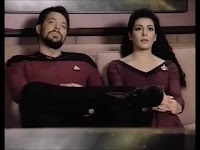 Troi -joined by an amused Riker, who probably just wants to see Picard's face- explains her mother's mid-life condition to the captain. She explained this to Riker when they were going out, but softened it so as not to scare him (female sexuality being a very scary thing). They warn that not only is sex drive quadrupled (at least), but Lwaxana will be deeply hurt by any rejection as human logic doesn't apply here (hormonal women are crazy, don'tcha know). Troi explains that in her mother's condition the honourable course of action is to focus her energies on one man who will become her husband. When Troi first mentions the "dignified" option Riker immediately suggests isolation. Hmm... maybe Troi should remember this attitude for later. Or is it just the single and sexually charged mid-life women who should be removed from society? Though if mid-life Betazoid women are so irrational and concerning to other species, should they be allowed to be ambassadors?

The End
"I didn't find a mate, but I did save the conference, as well as your reputations. All in a day's work, I suppose." Lwaxana seems hardly concerned about foiling the assassins, probably because it required little effort and wasn't fun. I'm glad she has the upper hand at the end though. As she beams away she accuses Picard of more naughty thoughts.
Posted by Catherine Hill at 18:36