Women on the Box

I'm going to talk about 3 British programmes that have no speculative elements in them whatsoever. How unlike me. Two of these were broadcast during the blog project and subsequent hiatus, so I'm talking about them a bit late.

Up the Women
The 2nd series was expended to 6 episodes on BBC2 from the original 3 episode run in 2013 on one of the BBC's second-string channels (though sadly it doesn't look like there will be more). I think this is just how the BBC does things nowadays, it was the same with In the Flesh. I remember when everything started with 6 episodes even if you never saw it again (I know to Americans this still sounds tiny, but that's kinda how it is). It's written by and stars Jessica Hynes, who I've always rather liked but now really admire.* 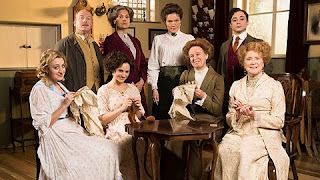 Set in 1910 against the background of the fight for women's voting rights, it is about 6 women (and 2 men) and their varied attitudes to women's suffrage. The first series saw intellectually curious Margaret become impassioned about the fight for the vote and encourage the women of her sewing group to get involved, with varied success and understanding. The second series builds on the existing dynamic with episodes featuring polling day, a visit from forward-thinking New Zealand sportsmen, a closeted homosexual suitor, and a cross-dressing group outing. Even though it's set in a very restrictive and uptight period the comedy is funny and not afraid to be rude. All sorts of topics including sex, marriage, snobbery and women's roles are covered with good humour and some dialogue that made me laugh out loud. It's all played very straight, no nudging or winking, which only makes the jokes more effective in my view.

The thing that really makes this series work so well is the interactions between the characters. Margaret and Helen both see themselves as the leader of the group, though Margaret's sometimes wobbly self-esteem and tendency to overthink stops her from reaching her potential (I feel for her a lot). Helen is usually the antagonist; the prim, controlling voice of the Establishment, but she's often undermined by her libertine mother who's obviously lived a varied and scandalous life. Helen's daughter Emily is also inspired by the cause of women's suffrage, and has a young woman's passion (or maybe she just takes after her grandmother) suggesting more radical action but still having difficulty openly defying her mother, or declaring her feelings for the man she loves. Eva is more interested in her own life and large family than politics, and she may seem like a bit of a ditz, but she means well and can be supportive of her friends. I suspect Eva is a bit of an everywoman character, though I don't know if that was the intention. Finally there's Gwen, the only lower-class woman of the group, a spinster that the others tend to unthinkingly treat like a skivvy, but whose lack of understanding in certain areas is made up for with good grace and occasionally brilliant practicality and enthusiasm. The token man of the group is Thomas, one of the best effeminate -but not camp- characters I have ever seen on TV. There are a lot of qualities Thomas does not have, but he is principled and compassionate. Finally there's Frank, the caretaker of the village hall where the episodes take place, a non nonsense working-class chap who finds the antics of these ladies somewhat perplexing. 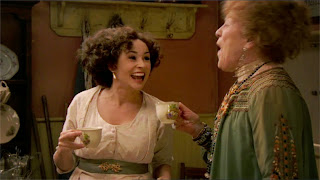 Raised by Wolves
A new series to Channel 4, Raised by Wolves is set in a council estate estate in Wolverhampton (a city in the metropolitan county of the West Midlands, which also contains Birmingham, the city where I live). It's about a large, chaotic family, mostly following the mother Della, and the eldest two teenage daughters Germaine and Aretha. There is one boy among the siblings and the laid-back grandfather -Grampy- appears in the episodes too. It's written by Caitlin and Caroline Moran and is based on their own unusual childhood in Wolverhampton. 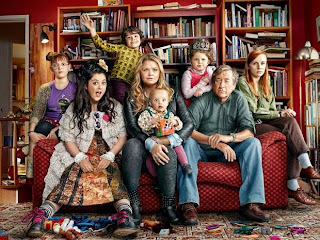 Eldest siblings Germaine and Aretha are intelligent and intellectual, aware of politics and pop culture, in a way that you don't tend to see in working class people on TV. Where Aretha is already fairly world-weary and able to see past the trappings of modern life, Germaine is keen to insert herself into the role of edgy outsider, even if that's not how others see her. Della is very dry and never afraid to get her hands dirty. There are various scenes of her doing something practical or giving very blunt and un-TV-mother-like advice to her children. She says it like it is: “We’re not southern twats and we’re not northern twats; we’re Midlands twats." I love this sentiment, if only because as a Midlander it's one I've shared for many years (albeit with less twats).

What's good about the show is that it's focused on what it's like to be a teenage girl, in a way you don't normally see. Despite her intelligence Germaine is attracted to a complete lout and is obviously horny as hell. In most teen-based shows girls are the ones to be attained and rarely is any focus given to their experience of hormones or loneliness (though previous Channel 4 show my Mad Fat Diary also did this). It is a balance that has long needed addressing because TV would have you believe that only men are put upon by puberty, lust and frustration, and that's simply not true. The character I most identified with is Aretha, her head in a book most of the time and never keen to participate, she's a young cynic who is dragged into things by her brash older sister and tries to shield the younger Yoko from Germaine's excesses (not that this reflects my life in any way, but I get the character's point of view best). It's very cool to have a show with multiple weird, offbeat female characters. Many shows will have one odd woman (who can range from regular, returner, or cameo) but never before have I seen so many non-mainstream depictions of women on a show, and it's great. 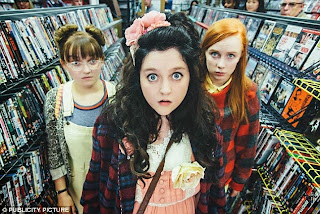 No Offence
A late addition to this post as it is currently airing on Channel 4, with the third episode broadcast on Tuesday. It's also the odd one out as it's not a half-hour sitcom but an hour-long police comedy drama. Although it is another new show that features prominently female characters. Written by Paul Abbott, whose work I've heard about but not seen much of, it is set in a Manchester police station.

It seems to be shaping into an ensemble show, as there's a cast of various characters, but so far DC Dinah Kowalska is a major focus. She's only person whose personal life we have seen, though that may be because in the first episode she takes work home in a very major way. Her potential promotion to sergeant is scuppered by a mistake she makes off duty, but she does set her station on the trail of a serial killer targeting disabled women. The show deals with serious crimes and treats these with appropriate weight, it is likely to be triggery for some people. Amid the serious stuff there is also a lightness of tone which is similar to that found in other workplace comedies, coupled with a very irreverent and sometimes dark or puerile sense of humour. This is largely embodied by Viv Deering, the mouthy Detective Inspector who is one of the most entertaining characters. Here is another definitely odd woman, but again one who is absolutely effective in getting stuff done. Newly-promoted Detective Sergeant Joy Freers is a nervy presence (and even she questions her promotion), but her insights and tactical knowledge prove she has earned her position and she doesn't quail when infiltrating a criminal's home. DC Spike Tanner seems like the traditional copper you get in this sort of show, and his character hasn't been explored much yet, but never at any point is there the slightest sign that he resents having women as his bosses. This is a gritty show, no gleam or glamour of the US-style cops and nothing cosy like the many police-procedural detective stories that already exist.

I haven't regularly watched a British cop show since Life on Mars and Ashes to Ashes, and it helped that the weird/speculative elements brought them to my attention. There are whole channels of crime/detective dramas from both sides of the Atlantic (and some places beyond), and I've tuned into a few here and there, but never latched on much. No Offence may not have the most original content, but the tone and style of it feel fresh and it's something I intend to keep watching. 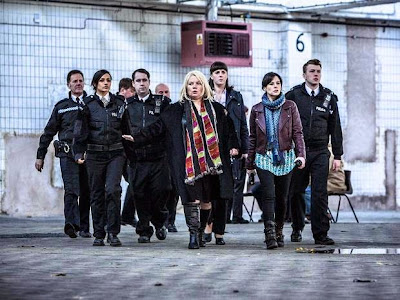 * I started this post before her speech at the BAFTAs, now having heard about that I think I might love her just a little bit.