A direct sequel to a series 1 episode you might have seen and one that feels kind of formulaic.

What Happens
It's Riker's birthday and he has a trombone and candles, but no cake which is surely the best part. Data and Picard are about to join the party when one of the Bridge B-team (who we don't normally see) calls Data over. The Enterprise is being probed by a nearby planet and so Picard calls Riker from his own party because an away team is needed and apparently only Riker knows how those work. Riker, Geordi and Worf beam down but there's interference that makes beaming back hard. As the toxic gas on the planet makes the away team lose consciousness the Enterprise tries to beam them back but its more difficult than it should be.
Riker awakes in sickbay where Crusher asks if he remembers her and calls him Captain. He's been in a coma for ten days, but has lost his memories of the last 16 years. She explains that he caught a virus on the planet that remained dormant for years but has merged with his DNA and removed all of his memories since the point of infection. He is now Captain of the Enterprise, Data is his First Officer, there are Klingons besides Worf onboard (though we don't see them) and a Ferengi Ensign. Picard is an Admiral now and he and Troi are escorting a Romulan Abassador to sign a peace treaty that Riker helped negotiate. He also has a son he can't remember at all and his forgotten wife died 2 years earlier. Riker isn't certain about going ahead with all this stuff he can't remember, especially when he discovers the Romulan Ambassador is the Enterprise's former foe Tomalak. Admiral Picard insists that they will support Riker through this. When Riker voices his suspicions he is called to sickbay because his son has been mildly injured. Riker tries to bond with his son, Jean-Luc (yeah, I know), aware of how odd the situation is. He curiously looks at pictures of his wife, and recognises her as Minuet. That's when he gets angry, goes to the Bridge and yells at everyone. He knows none of it is real.
The holodeck projection disappears leaving Riker with Tomalak, who reveals that he's in a secret Romulan base. The Romulans scanned his memory for info, and when they couldn't find tactical secrets they used his memories to create a fake-future situation where "Captain" Riker would tell them what they wanted to know. Riker figured it out because the Computer was slow and his "wife" Minuet was never real, just a holodeck projection he created in series 1. The whole set-up doesn't make sense to Riker (or me), but ignoring his questions the Romulans throw him in a cell with the boy whose image was used for his son. The scared child tells Riker he found a hiding place on a previous escape attempt. They knock out the Romulans that come to take Riker away and the kid shows him a large vent to hide behind. It leads to a series of tunnels and caves that are underneath the Romulan base. It looks surprisingly comfortable, but Riker is determined to signal the Enterprise. The boy warns that Ambassador Tomalak controls the comms and Riker is immediately suspicious. It sounds like the Romulans are coming, but Riker realises he's in another fake environment.
It turns out he and the boy are alone in a cave which has neural scanners embedded in the rocks, which are probably powered by magic or something. Unless it's the kid who is magic, I'm not sure.
Riker contacts the Enterprise, confirms that he is fine and so are Geordi and Worf who were beamed back successfully. The boy says he was left there by his mother, to keep him safe. Their people were attacked by enemies and so the mother created this sanctuary for her child to hide in, but she knew she was being pursued so she drew them away. The boy just wanted company so he kept Riker on the planet and used the neural scanners to create a world Riker would want to stay in. The boy reveals his alien face and Riker offers to take him back to the Enterprise so he won't be alone.

Oh Admiral My Admiral
Picard's facial hair should have been a clue that something was up. Only Riker and Sisko (to my knowledge thus far) are allowed to grow facial hair and not be the evil versions of themselves. This is one of the more accurate aged-up versions of Patrick Stewart I've seen, the hair is the main difference.

Riker: husband, father, Captain
The trombone is back and it's like a whole thing. Just in case you had forgotten that Riker played the trombone that one time in a series 1 episode and that apparently equals a hobby. In fact if you haven't seen 11001001 then this episode will probably seem even more random as it's basically a sequel. Riker gets what he's always wanted, a promotion without having to leave the Enterprise (and without Picard dying). It's telling that when Beverly wants to take him somewhere familiar to jog his memory he insists on going to the Bridge instead of his quarters because "My life was on the main Bridge. Always has been". That's kind of sad really, especially as I think Riker's supposed to be the "cool" member of command staff. He's quite the workaholic, no wonder no one else can organise an away team, bet he doesn't give them chance. I think that's why he and Troi didn't work out, though she's always on that Bridge too (despite having an office elsewhere), so perhaps the real question is why it takes so long for them to get back together? Riker doesn't seem to have accounted for the fact that after a 16 year memory gap he doesn't have the slightest clue what's going on. At least he's embarrassed when everyone stares at him for doing nonsensical stuff.
The whole thing with the dead wife and the unexpected son is perhaps less part of Riker's ideal future, but of course the little alien boy wanted a daddy so badly, or something. Riker realises how weird and potentially damaging this situation is for his kid and tries to create a bond, which is of course what the kid wants. Though it seems a little odd to tell his kid that the last he can remember he was in a place where he wasn't sure if he even wanted a kid. The legacy of Pa Riker the jerk still lingers. No reason is ever given for why the little alien boy chose Riker, unless it was just that Riker was the one left behind (not sure how much control the kid had over who could beam away, I kind of thought he was controlling everything). Come to that no reason is given why the kid pretends to be Riker's son, could just have easily been a daughter seeing as how it was all shape-shifting.

Counsellor to the Admiralty
As with Crusher the future Troi has a little grey in her hair and wears it up now. That's what happens when women get older in Star Trek, I guess? I'm not surprised "Admiral" Picard asked for Troi to come with him when he changed role, she'd been his unofficial secretary for years. Troi is the one who tells Riker about his wife "Min" (that was a clue!), who was also the ship's counsellor. I'm guess the alien kid realised Riker has a type.


Future Ain't Better
I don't understand why Riker refers to his wife as Mrs Riker, William T. Um, I know he doesn't know what it is yet, but she will have her own damn first name! He immediately assumes they were married, presumably because they had a kid, which doesn't have to be the case at all (unless you're a Captain maybe?). Then he uses a form of address that's kinda old-fashioned nowadays (admittedly my family tend to use Mr & Mrs D when addressing letters to me and my husband -lord knows why- but I have only once in my life heard someone in real life vocally call a woman by her husband's full name, and that was an old, posh lady). At first I hoped the computer was failing to find her details because his wife wasn't actually called William. I appreciate it's being done so as not to mess with the reveal, but it seems bizarrely conservative for the future.
I honestly don't understand the mores of relationships and family in Star Trek. I get the impression it wants to be progressive and in a previous episode Troi has mentioned the idea of a man marrying a woman because he impregnated her as primitive, but here there's no question that Riker wouldn't be married to the mother of his son. Just like when Lwxana Troi was really horny and that meant she had to find a husband, for no clearly explained reason. It's all confusingly old-fashioned and vague, but I guess it was made in the early 90s, so there's that.

That there is a Ferengi Ensign on the Star Fleet flagship in the fake future might seem prescient. At this point I'm guessing Nog (the first Ferengi to join Star Fleet) has never even met a humon. Also Geordi not needing his visor any more is another good prediction. Of course it's all a bit less impressive when you realise that this was an episode full of things the writers later realised they could use. Not that I'm knocking it, that's pretty sensible, but not a cause for amazement.


Staff Meetings: 1
1. Riker expresses suspicions about Tomalak, Picard and Troi try to reassure him. When he keeps asking questions he is called away by a convenient emergency.

Near-Death by Space Misadventure
Riker (2nd in command), Geordi (Chief Engineer) and Worf (Security Chief) all nearly die from poisonous gases on a planet that probably wasn't a good place for humans and Klingons to go. Turns out the planet not only had toxic gas but also interfered with the transporters.
None of these away teams go down with space suits or breathing equipment, ever! They also don't seem to send probes down first to check the atmosphere and pressure. They don't even do a test-transport with a plant or an animal to make sure that there's nothing blocking the systems. Not that we see anyway. They just beam people down and it always seems to be fine, except for this one time when everyone is almost asphyxiated. Bet they won't be wearing space suits next time though. Just as everyone you meet is a biped it seems like every planet you encounter has Earth-like pressure and atmosphere. If away teams were so expendable that you could just chuck 'em down on a planet to see if the air is breathable they wouldn't be staffed by senior crew.

The End
Riker beams away from the planet holding hands with the little alien kid. I assume we never hear of him again. 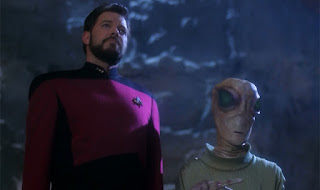 Does the shapeshifting alien kid take Riker's place and use his memories to impersonate him? My guess is no, not at all, but that would have been really interesting.
Posted by Catherine Hill at 12:36