A Lwaxana Troi episode where she gets to deal with some real emotional stuff and no one mocks her for her desires. Yay! Also, ohh the feels! 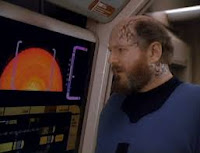 Lwaxana is aboard and invites herself along with Picard as he welcomes a scientist from a reclusive species that has asked the Federation for help restoring their declining sun. Lwaxana latches onto the reserved scientist, shows him around and provides a picnic in Engineering while he's working. He shyly enjoys her attention (because finally someone should!), but doesn't join her for the evening. The Federation have found the scientist a suitable sun that they can run a test on, in the hopes that Federation tech can save his planet. They've known the sun is declining for generations and this particular scientist has spent 40 years working on the solution, and 3 of those were just the search for a test sun. The test seems to go well, but the sun gets too hot and goes explodey. The scientist is devastated, but thanks everyone for their help. 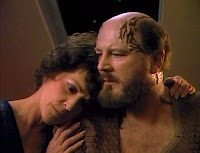 Lwaxana tries to comfort the scientist and he finds her company helpful, but regrets that they hadn't met sooner. He's devastated because he'd wanted to save his planet before he died, but now he's returning home without success and he will die when he gets there. Lwaxana is enraged to learn that on his world people have a ceremony when they turn 60 and are euthanised, she insists that Picard intervenes. Picard points out that he can't because Prime Directive, and Lwaxana tries to beam down to the planet to raise some hell, but Deanna points out that no one can let her. Deanna comforts her mother, who is crying and feeling her own mortality. Lwaxana and her scientist talk and spend the night together. Then they have a long -and at times heated- discussion about the custom, and she tries to convince him to ignore his beliefs and choose life.
The scientist discusses the test with Geordi and Data (well, they're there) and realises something about neutrinos which he might be able to fix if he had time. This realisation chimes with what Lwaxana told him and he requests asylum from Picard, he wants more time to work on his findings. He tells this to a Science Minister, who is appalled at the suggestion that he live past 60 and rejects the notion entirely. When the scientist says that anyone new would take longer to reach the same point he is dismissed, younger people take things over, that is the way of things and all of his loved ones are gathering to honour him. A couple of warships approach the Enterprise and Picard is told they'll attack if the Federation ship leaves with the scientist on board. 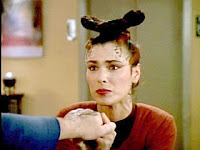 The scientist's daughter is sent to the Enterprise; she's appalled and distressed by her father's decision and blames Lwaxana for influencing him. She describes her disappointment and her fears that her father will leave their planet and die among strangers without being laid to rest with his family. He finds that all his work has been removed, meaning he can't continue to help save his planet. He tells Lwaxana that he's going to return home to die, he doesn't want to start a revolution or hurt those he loves. The thought of being with her is almost enough for him to stay, but not quite. She accepts his decision and joins him for his ceremony. 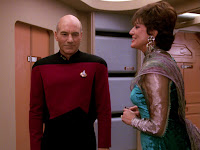 Oh Captain, My Captain
Initially Picard does his usual thing of unsuccessfully dodging Lwaxana, but luckily this whole schtick, which has gotten pretty old, only happens during the pre-credit scene, then Lwaxana meets the scientist. Later Picard has to explain why the Prime Directive means he can't interfere in another culture's rituals and practices, even if they seem dreadful to the Federation. When the scientist goes to Picard for asylum the Captain accepts, but refuses to advise him on whether he was right.

It's Not Easy Being A Troi 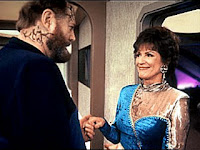 Deanna is only in this a little. At first she rolls her eyes at her mother a bit, joking about her being insatiable when she's dressing seductively. Which is odd when you consider Deanna is the one who explained that women of her age in their species are very sexual. Of course Lwaxana chides her daughter for not practising her telepathy and judges her based on her lack of love life. So I guess this is just a mother-daughter activity with them. Later Deanna comforts Lwaxana as she cries over the scientist's fate. Though Lwaxana is sad and angry (sometimes when some people get angry enough they start to cry, which just frustrates and makes you want to cry more) about the upcoming death, she's also reminded of her own mortality too. She tells Deanna about feeling tired and afraid, and Deanna kind of tangents it onto reassuring her mother that she's not going to get frail or senile before her time. This isn't really the issue here and is also not something Deanna can tell based on her mother's personality, because that's not how age-related conditions work. It is super nice that Lwaxana gets to have a good relationship with someone who truly reciprocates her feelings and is utterly charmed by her. I was getting really fed up of jokes about men avoiding her because she's out-spoken. Of course when Geordi sees that Lwaxana has attached herself to the scientist he makes a snide comment, because he can't just stand and watch.
I don't quite get how this whole Betazoidempathy/telepathy thing works. In last episode the Betazoid investigator could tell that someone was lying and hiding things, with more success than Deanna (who is also half-human, so fair enough), but he couldn't tell what they were actually thinking and it was only ever referred to as a feeling, which sounds more like empathy than telepathy. Lwaxana is definitely telepathic and can communicate mentally with her daughter and acts as though she has a sense of others thoughts (though it's likely she's exaggerating), but that may be something that only works with someone close to you. Deanna can only ever do telepathy with Riker and her mother. From Lwaxana's attitude it's clear she thinks Deanna can do more and that telepathy, rather than empathy, is the norm for her. It makes me wonder whether Lwaxana is particularly talented at the mental arts. It may explain why she has all those titles, and why she expected more from Deanna, despite that her genetic background wouldn't be so strong.


Future is Better
The scientist's culture is reclusive, isolationist and nearly xenophobic. Very little is known about them and they've only gone to outsiders because their planet is at risk. Though at least they realised their sun was in trouble, and are working on it with generations to go, so they're doing better than the Kryptonians. Even though he's happy to be working with the Federation the scientist has trouble imagining himself or his people living elsewhere besides the planet. Their sense of place and culture is clearly very strong. He regrets the situation he's in, both in terms of his work and meeting Lwaxana, but he doesn't think of changing his situation and argues against Lwaxana's demand that he does. This doesn't seem to be an area where social mores are up for discussion and I get the impression that rebellion is unusual or strongly discouraged. Institutionalised euthanasia is discussed and explored without the dialogue being preachy. Of course Lwaxana finds it horrifying and wasteful for people of only 60 to give up on their lives. The scientist tries to explain how terrible it was for old people a millennia ago, left to decay until their natural deaths, and that no one wants to be a burden or trapped in a life with such poor quality. It's a persuasive argument only because it highlights people's fears about aging, but it's also a terrible solution. These people have built their whole culture around the idea that people over 60 can't be of use, and Lwaxana's right that it's a terrible waste and far too young. There's been no work to improve people's lives or find cures for age-related illnesses. The scientist is only convinced by Lwaxana when he sees how he could make progress in his work, but when he realises that he won't be allowed to save his planet and that his decision will hurt his family he changes his mind back. He points out to Lwaxana that he's no revolutionary. It's so sad, but not surprising.

The Prime Directive Is A Harsh Mistress
I don't feel like these rules have been fully defined, but as these people aren't human (or another Federation species), I guess the Federation have decided they can't interfere. Though presumably this planet must be post-warp or technologically advanced enough to have contacted the Federation for help. Star Fleet are sharing their tech and resources to help presumably because they were asked and because this reclusive race are advanced enough that this doesn't count as interfering. Of course if they were pre-warp then Star-Fleet would be honour-bound to let them be destroyed when their sun exploded, but could totally have observed them in secret until that happened.

Staff Meetings: 1
The scientist explains how they're going to do something with some weapons to reignite a sun in a similar condition in the hopes of saving his own planet's star. Picard apologies that it has taken 3 years for the federation to find a suitable sun for testing.

The End
Picard regretfully wishes the scientist goodbye and asks him to tell his people that the Federation will be ready to help when they want to try again. Lwaxana arrives unexpectedly to join the scientist at his Resolution ceremony, as one of his loved ones. She assures Picard she won't cause trouble on the planet, and he gives her permission to disembark. Lwaxana and her scientist hold hands to beam down. It's so, so sad. 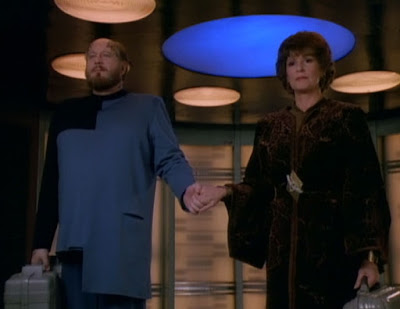