My due date is in 2 weeks and I am on maternity leave now. The last 8ish months have been an experience.

I know that I am very fortunate in many ways, I want to be pregnant and did not have much trouble achieving it. I also know many people have much rougher pregnancies than I have. One of the main things about pregnancy (or I suppose procreating in general) is that you don't have any idea how it's going to go until you try it. There are some common factors to pregnancy, but otherwise it's a lottery. I know at least one person who felt great when she was pregnant, but a lot of people feel terrible.

An early sign of pregnancy is that your sense of smell suddenly improves (it's one of the main things that isn't also a symptom of something else). I'd been told about this, but hadn't expected it to be enhanced so dramatically. For about  three months I was always tired and everything smelled; it was like a really useless version of being a werewolf. Not fun as it was summer (when bad smells tend to be stronger anyway) and I use public transport, which means being in fairly close proximity with strangers. It wasn't even just traditionally bad smells, a lot of artificial/cosmetic smells bothered me for a while. It turns out I don't have the most fragrant life (not a thing I'd ever really considered before) so I was glad to lose that power.

At present I'm moving very slowly, I can go a few yards at normal place then I have to slow right down. My father is in his 60s and has a pin in his hip but he was outpacing me last month. My husband reckons I have started to waddle.

I need to pee all the time, or at least I think I do. When you're pregnant you're supposed to drink a lot more than usual. It turns out my body can't tell the difference between my bladder being full of liquid, and my bladder being squashed by my uterus. Add to this the occasions when I'm pretty sure the baby has used my bladder as a punching bag and it's a perfect storm.

One nice thing is that I have never enjoyed looking in full length mirrors and other reflective surfaces so much in my life. I really like seeing the growing baby bump and the changes to my figure. It's also useful to see what the underside of the bump looks like cos I can't see much below my belly button.

I've been wearing men's jeans for months now. There's only one pair of my own jeans I can still wear. I realised that my husband's jeans fit better fairly early on, it's lucky we're a similar size. Then I realised that if I bought some slightly larger men's jeans I could wear them as I grew and my husband could wear them too. It's more cost effective than buying a load of specific maternity clothes, especially as I might not wear them again in a few months. I've found that as well as having far bigger pockets, men's trousers are generally much looser all over (not just in the crotch) and so more comfy and forgiving for a growing torso, if more likely to fall right down when unbuttoned.

Me and my husband did a partial de-cluttering that included throwing some stuff out and sending a load of stuff to be put in my parents' attic. Then we had a re-cluttering which mostly involved people giving us baby stuff and us buying new furniture. We now have extra storage space and no spare bed. I think we'll probably need a bigger house in the next couple of years, but should be OK for now.
A lot of DIY and cleaning has happened (with much help from my husband and parents), more is needed but the big stuff is done and it's a big improvement. I have already warned the washing machine that 2017 will mean a lot more work for all of us. 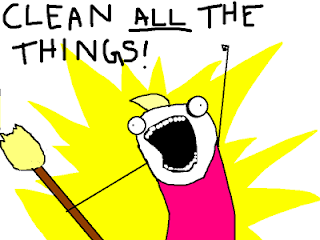 I still have a various things I'd like to do, but I'm big and slow-moving and knackered, so some of those might not happen for a while. I'm trying to be calm, but I have the feeling that at any moment I'm going to be terrified. Probably when the labour starts.

At the moment it's all waiting around, and though I'm not looking forward to the birth side of things I'm really excited to meet the baby.

Of course in a month I expect I'll be super sleep deprived.