I've recently had a baby, for more on this please see my last 2 posts or the 'real life' tag. If you are here for the Star Trek TNG posts read on (these are simple and so I expect to be continuing). If you're wondering what happened to the film and book posts, it's a good question and I hope to address this soon - depending on how much rest I get.

A dangerous old adversary returns and there's more about Data's past because he and Worf are currently tied for Most Interesting Character as far as the show is concerned. 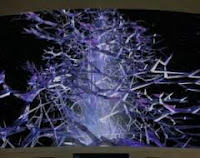 Riker, Data and Crusher are visiting a very new colony and Riker is flirting with Carmen, who seems to be an in charge of where the buildings will be. The sky goes dark as a big, scary space tree blocks the sun, it's the Crystalline Entity from Datalore. Data identifies some caves for shelter and all the colonists run there as the Entity destroys the landscape, but Carmen is killed while helping an old man. Riker and Data seal everyone in the caves. The Enterprise crew realises something odd is happening on the planet, but they are some distance away. Just as conditions in the cave become dangerous to health Worf and Geordi break in and rescue everyone. 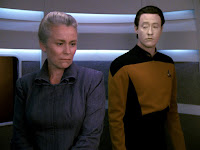 Dr Marr, a scientist who's an expert in the Crystalline Entity, comes on board to investigate the remains of the planet and collect accounts of what happened; this is the first time there have been survivors of an attack. Picard assigns Data to work with her, but she doesn't like him and says she knows Lore worked with the Crystalline Entity before. Picard points out that Data is the most knowledgeable and insists on the assignment. Dr Marr ignores Data as much as she can and when he tries to engage she claims there were only survivors this time because Data led the Entity to the planet and it didn't want to kill its ally. It turns out her 16 year-old son died in the attack on the colony where Data was first found, which is why she's an expert on the Entity and why she hates androids. Marr tries to ignore Data's suggestions about analysis, but Geordi runs tests as Data suggests and finds a way to track the Entity and so Marr concedes Data was helpful. Dr Marr is interested to hear that Data really does have the memories/files of the colonists within him. The Enterprise is able to track the Entity but Marr is aghast to discover that Picard wants to avoid damaging it. Picard advocates communicating with the Entity and trying to understand it, she wants to kill it because it's dangerous and will keep destroying planets.
Marr asks Data to tell her about his memories from her son. The Entity is detected near an alien ship, but by the time the Enterprise gets there every living thing on board is destroyed and the Entity is heading towards an inhabited system. While they are working on a beam to communicate with the Entity Marr asks Data to recite one of her son's journals using the lad's voice. When the Enterprise gets close to the Entity Marr and Data use their beam to make contact with it and they get a response though it is not decipherable. Marr changes to a continuous beam and the communication stops, then the Entity starts to shake. Troi senses something is wrong and Picard orders the Marr to stop, but she won't. Geordi and Data try to stop the beam, but Marr has locked the system. The Entity shivers then shatters; Marr is defiant as no one will ever be killed by it again. Picard orders Data to escort her to her quarters. 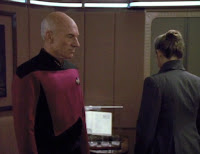 Picard's mission of exploration and understanding is at odds with Dr Marr's vengeful hunt. It's not clear why Picard didn't realise that the Dr would try to kill the Entity. I know he's used to people being convinced by his speeches, but the woman clearly felt strongly enough about this to throw her entire career and life into it. He'd already observed to Troi that Marr might not be objective and this could affect her work, but though she started working well with Data she never conceded Picard's point about not destroying the Entity. In fact their talk just ends with Picard basically dismissing her and there's no indication that she ever changed her mind or even understood his viewpoint. 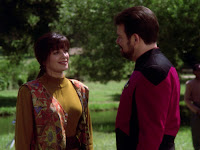 Carmen from the colony, who is clearly planning to have sex with Riker, calls him an adventurer - it's like she's read my heading; we just needed him to deal with a personnel issue or something and it'd be all three. I'm not sure if they've only met on this mission (though their talk suggests they've already had a romantic encounter) or whether they have previous history; I suppose it doesn't really matter since she's not around for long. Riker is given the opportunity to send to letter to Carmen's family along with the official notification of death from Star Fleet, is this because he witnessed her death or because they were involved?
After they hear a ship being destroyed Riker tells Picard he agrees with Marr about killing the Entity, but Picard suggests he's not objective either (lack of objectivity being the worst crime here it seems). Riker points out that he's lost people under his command before, but if prioritising communication means the Entity would kill again he'd feel like those deaths were on his conscience. Then he just kind of leaves, so there's no further discussion and this is the only time a main character/Star Fleet officer expresses a dissenting opinion to Picard. I feel like the episode isn't really into this side of the discussion. 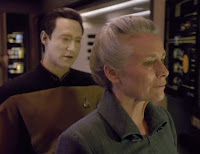 Data is again the ideal oppressed person/victim (I explored this in greater detail in Redemption part 2) and has no feelings about the awful way the Marr treats him. He points out calmly that he is not the same as Lore (it's awkward that the only other android people will meet is at best amoral) and that her behaviour towards him hinders their work. I've commented before that visitors to the ship seem inclined to be well-disposed towards Data, and speculated that people might project onto him quite a lot. This episode explores this by having a guest star project onto Data in two different, but very strong ways. Troi observes that Marr transfers her feelings about Lore onto Data, which is understandable as they're identical and created by the same person. Of course it's also a form of stereotyping/discrimination, but handily there are only 2 active androids about (that we know of) so there's no reason to consider wider types of discrimination. Then when Marr stops hating Data and asks him about her son's memories she very understandably projects her feelings and insecurities about her dead son onto him, these feelings only increase when she asks Data to use her son's voice. I feel like someone (probably Troi) should talk to Data about how people with emotions react to certain things and which behaviours he should be wary of. While Data presumably has no issue with becoming a stand-in for this woman's son I don't think that this dynamic is healthy. That Data doesn't anticipate Marr's actions isn't surprising; he doesn't necessarily have much understanding of her overriding, emotional motivation. I suspect he doesn't factor duplicity into his interactions with others in Star Fleet.
We learn more about Data's origins, and this episode makes sense of the odd snapshots we got back in in series 1. Data holds the memories of the colonists who were killed decades before, but not their feelings. From the info we get here it seems that Data might just have documents and logs from that doomed colony rather than anything more experiential, which makes it confusing that they are referred to as memories.

Counsellor Pointless
As the Enterprise rushes to the planet Troi reassures Picard that things may be fine despite the weird readings, proving she is not magic. Later when Dr Marr won't stop the beam Troi says something is very wrong, but we can already see that. Troi seems to be getting that feeling from the death throes of the Entity, but there's no other sign Troi can communicate with it. Alternatively, she could have got a read on what's happening from Marr's state of mind, but if so couldn't she have sensed she was up to something before?


Girl Talk
No Bechdel-Wallace pass (which is just a low bar for character interactions, not a measure of quality or superiority) because no female characters talk to each other, despite there being two female guest stars. Yet again Troi and Crusher are present and do their jobs, but are barely involved and have limited dialogue. It's not great that a love interest character is introduced then killed really quickly, but the episode avoids the fridging trope because the episode isn't about Riker or his feelings and the events of the early episode are a jumping off point for exploring a female character and her long-standing grief over the death of her son. 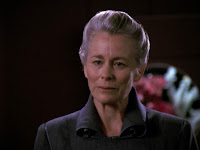 Dr Kila Marr is a complex character, as well as being a leading scientist her emotional landscape is explored from her bigoted interactions and assumptions about Data, to her vulnerability about her son's death and the nature of their relationship. She is filled with grief-driven determination and the writing and performance here are very well done. Her angry, vengeful pleas to destroy the Entity do make sense from a safety point of view, and her calculating insubordination to achieve her goal isn't unexpected (unless you're Picard or Data). She isn't a bad person -though clearly we're supposed to feel disapproving of her attitude and actions- but the situation isn't just painted as black and white, which is good.

Death by Space Misadventure
Carmen Davila (and an old man) 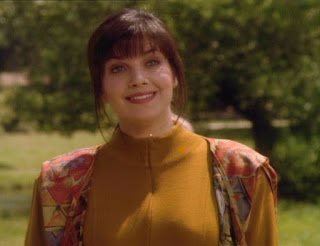 Carmen seemed to hold a senior position in the outpost on Melona Four and was overseeing something to do with the early stages of founding a colony there. It's possible she was a surveyor or architect, she knew where the buildings were going to be. She cared for both the idea of the colony and the people there. She lost her life when the Crystalline Entity attacked, trying to help an old man who had fallen while running to shelter.

The End
Marr asks Data how long he will live and is comforted to hear that there is no known end date for his existence, meaning he can sort of keep her son alive within him. She talks to Data as though he is her son and asks him to understand that she killed the Entity for him. Data says that there's nothing to suggest that her son would understand, he was proud of her career as a scientist and now she has thrown it away. Data says her son would be sad about what happened and he cannot give her any peace. It's kinda harsh and sad, even if you didn't agree with what Marr did. 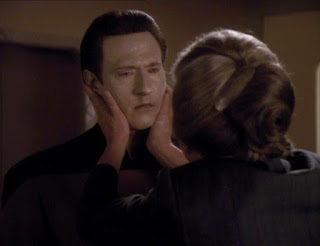