What Happens
Previously: Picard was sent after Ambassador Spock who ran off to Romulus, and the Enterprise discovered an old Vulcan ship was stolen from a Federation scrap yard. 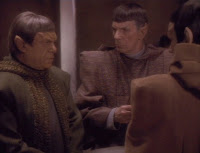 Picard confronts Spock in a cave, asks why he came to Romulus and tells him his father is dead. Spock says he came in the cause of reunification; an underground group of Romulans are interested in Vulcan culture and Spock thinks that the two long-divided cultures could come together again. Although this movement is suppressed by the Romulan government Spock's friend, Senator Pardek, says there's a reforming proconsul who is sympathetic and wants to meet Spock. Picard and Spock also discuss the latter's difficult relationship with his father and Spock accuses Picard of speaking with Sarek's voice. Data asks their Klingon escorts for computer access so he can hack Romulan intelligence systems and send a message to the Enterprise.
Meanwhile Riker is in a seedy bar talking to a four-armed, pianist who is the ex-wife of a smuggler somehow connected to the missing Vulcan ship. The investigation is not important enough to be filmed (I suspect they ran out of time). The pianist indicates that a fat Ferengi who frequents the bar was involved with her ex-husband's dodgy dealings. Later Worf reports the Ferengi has arrived, then Riker makes him reveal where the old Vulcan ship went. It was given to people who trade with the Romulans.
Spock meets a proconsul who seems happy with the idea of reunification and is prepared to publicly endorse opening talks. Spock is surprised this is going so well. The underground Vulcan-sympathisers are super excited, but Picard suggests caution. Spock says he will continue seeking reunification, even though he agrees with Picard that this all might be a trap. Spock helps Data hack into Romulan systems and they discuss their differing views on humanity. Now able to contact the Enterprise Picard learns from Riker that the people who had the old Vulcan ship sent the Romulans a coded message. The info in this message tells Spock that the proconsul has a plan that involves the stolen ship. As they realise the deception Sela (half-Romulan daughter of alt-timeline Tasha Yar) appears from the shadows and captures them. She reveals that she and the proconsul plan to invade Vulcan.

There are 3 stolen Vulcan ships, the start of an invasion. Sela tries to get Spock to give a speech saying the ships are peace envoys, but he refuses. She plans to use a holographic Spock instead. Picard, Data and Spock are left in the proconsul's office under guard, the Romulans haven't realised their computers were hacked, and Spock has a plan. When Sela returns her hostages are gone, then Riker and Star Fleet security officers appear. The Romulans shoot them and discover they're holograms, then Spock appears from a holographic wall and disables a Romulan guard, Data gets a Romulan weapon and trains it on Sela. She thinks the invasion will still be successful because of her fake-Spock message.
The Enterprise sees the 3 Vulcan ships coming out of the Neutral Zone, but they don't seem to match the one they've been tracking. At the same time Crusher gets a distress call from a planet that needs evacuating. They're about to go help when a broadcast comes from Spock, who says that the ships are actually a Romulan invasion force. The evacuation call was fake and so the Enterprise goes to intercept the "Vulcan" ships, but a Romulan ship de-cloaks and destroys their own forces rather than allow them to be captured. 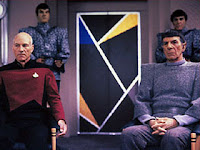 Picard acts according to his orders from Star Fleet, but also as a proxy for Sarek. He believes what he's saying, but his duty, his memories from Sarek and his own personality all line up very neatly, so there's no internal conflict. Instead he argues with Spock's course of action, causing the Vulcan (who is much older than him) to treat the Captain as a father-figure, and it's likely that Picard is expressing feelings he got from Sarek. It really is hard to tell where Picard ends and Sarek's influence begins, which explains Spock's reaction to him. Picard points out during a heated discussion that he is not just a mouthpiece for Sarek, which is nicely reflected at the end of the episode when Picard calmly and sympathetically offers to be a conduit for Sarek's memories to help a grieving son. Although Picard counsels caution, is compared to Sarek at various points and even described as Vulcan-like, Spock somehow also compares him to Kirk. Presumably the writers couldn't resist the temptation. I thought Picard is meant to be a very different kind of Captain, though his character contains enough range that he can be both Kirk-like and not as episodes require. 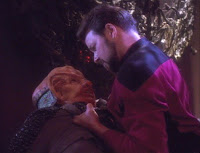 In a brief log Riker explains why he's at the bar, which seems like both a cop-out and a relief. On the one hand much more investigating would've slowed things down. On the other hand it feels like cheating for the careful investigation of last episode to have magically tracked down someone useful off screen when all we knew before was that the ship stealing supplies was mysteriously unidentifiable and then exploded. There's no connection between where they were and where they get to; it definitely feels like something got cut. I can mostly forgive it for the scenes in the dodgy bar, with the pianist. Plus the pianist is cool and Riker is charming with her. After he got Troi to be placatory on his behalf last episode I notice he's fine with a charm offensive when he feels like it. He threatens a Ferengi and follows his lead to a place near the Neutral Zone, after which the hole-filled investigation is overtaken by events. I get the feeling that Riker was suspicious about what's happening, which is why he's skeptical about orders not to interfere and the evacuation elsewhere. I find it odd that Riker doesn't disguise himself while seeking information, he's doing it officially and presumably the bar is in Federation space (or somewhere friendly), but it's pointed out that it isn't exactly a Star Fleet place. He has no need for the kind of subterfuge Picard and Data had to employ behind enemy lines, but it seems like Star Fleet uniforms would attract unwanted attention and probably deter potential leads. 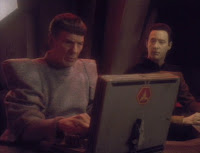 This episode bluntly compares and contrasts Spock and Data; it is only logical. There's little subtext to the exchange where they discuss how they relate to each other. Each has qualities the other aspires to and they both point this out. Data is more Vulcan-like than Vulcans, yet wants to achieve humanity; while Spock has chosen a Vulcan way of life, turning his back on his human heritage. It's not the first time someone has expressed confusion that Data is dissatisfied with himself (which seems like an emotion and a strong one as it's his driving motivation). This feels like a meeting of equals, which isn't surprising as Data was clearly designed as the Spock stand-in. Data points out that Spock's claim of "no regrets" is a very human thing to say, leaving the Ambassador deep in thought.


Security Breach
Shouldn't Spock wear a hood, or a hat, or something when visiting the proconsul? He's a very famous Vulcan and he's just wandering into a Romulan government office like it's no problem. The main trait we've seen from Romulans is that they're suspicious, and that's not just the military ones the Enterprise has encountered in space, there's the lady from the cafe last episode who felt the need to quiz out-of-towners. The furtive nature of the underground shows how oppressive the regime is, books and toys are objects of danger because they promote knowledge the government doesn't want people to have. I know that the security forces are in on the plan, but it seems like Spock should be taking more precautions when he's out and about.

Future Is Better
We don't get to see the seedy side of the Trek universe much, but it's nice to know it exists. The Federation and Star Fleet are so wholesome and shiny, and even when bad stuff happens within it, there's a sense that it's an anomaly. Nice to see that there are folk just getting by as best they can, even if they haven't got a fancy job. Having said that I kind wish this section didn't have decorative ladies, because they probably have interesting stories but we aren't supposed to care. 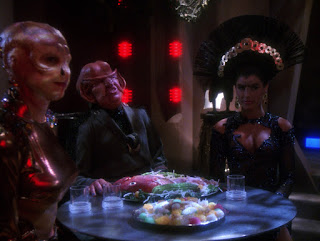 The talk about progressive reform on Romulus sounds good. Pardek says young people won't allow old men like him to "hold on to ancient prejudice and hostility". The young proconsul says "The old leaders have lost the respect of the people. ... Times are changing, and leaders who refuse to change with them will no longer be leaders." It is all lies. Just goes to show you can't necessarily trust people who talk the talk. Pardek betrayed Spock, but it's never made clear how long he was in on the plan. He's been friends with Spock for years, the Vulcan praises his unique viewpoint, and his political record certainly suggests he's an unorthodox Senator. Plus the underground clearly know and trust him, though they didn't show him all their secret caves, suggesting he might be new to them. Was he just recently used by Romulan security forces, and do they have leverage over him? Or has he been cynically playing at friend, ally and man of the people for decades in order to subvert the Underground and monitor a Vulcan ambassador? I think the show wants us to think the latter, though I think the former would have been more interesting. 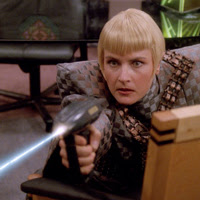 Girl Talk
Troi has 6 lines, Crusher has 2, neither do anything of much import. The episode doesn't come near Bechdel-Wallace requirements, I'm not sure 2 female characters even share the screen. We do have the return of Sela who, as I commented  before, is a mastermind and a strong antagonist, though she doesn't feel as impressive this time. Her background was revealed at the start of this series and gave her some complexity, but the novelty of her appearance has worn off. Here she's a returning adversary and really just another devious Romulan strategist, though perhaps more bold than previous ones.

Amarie the fat, four-armed pianist is amazing and the kind of woman we don't usually see on this show (and not just because of the arms). She's not there as decoration and she's not treated as comic relief or looked down on. She's confident, flirty and a talented musician, who knows the music of various cultures, even a bit of Klingon opera. Plus she's had multiple husbands, so she's probably quite a catch. She thanks Riker for killing her ex and she's not at all intimidated by Worf, which is kinda badass. 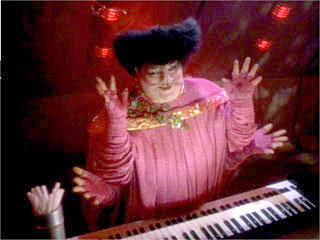 The End
The rebel Romulan underground must go further into hiding after Pardek's betrayal, but say they'll keep teaching Vulcan ways to their children. Spock tells Picard he'll stay to help these people, though reunification is a long way off. Spock reveals that he never mind-melded with his father, so Picard offers Spock to mind-meld with him and see what Sarek shared with him. 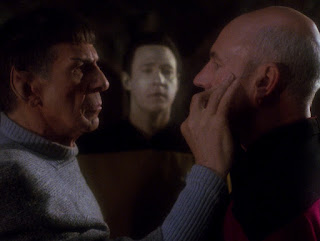