A Matter of Time

The Enterprise is going to help a planet that has climate problems after being hit by an asteroid, when they encounter a temporal disturbance and a strange, small vessel. A gangly, eccentric man beams onto the Bridge and introduces himself as a Professor from 200 years in the future. He's fascinated by everything, makes odd comments and has frenetic energy.* Picard expresses surprise that he's of interest and others ask the Professor why he's there, but the time traveller tells them he can't give hints because he must preserve the timeline. He wants them to fill out questionnaires for his historical research.
Unlike in many episodes they get to the place they were originally going, the planet is rapidly cooling as dust from the impact (which was luckily on an uninhabited continent) fills the atmosphere, blocking heat from the sun. Geordi's plan is to use the ship's weapons to release underground carbon dioxide pockets, creating a purposeful greenhouse effect. It seems the Professor is there to witness this mission, and he asks Geordi various things before sneakily stealing a pad. Later the Professor hangs around the Bridge watching Picard with a weird intensity while orders are given and the planet's atmosphere is monitored. The mission seems to be successful as the planet warms again. 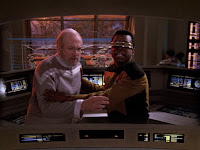 Troi tells Crusher that she doesn't trust the Professor. He knows Troi is suspicious of him and cheerfully talks to her about it. He then flirts with Crusher, but she isn't buying what he's selling. On the Bridge they realise that they've created geological instability resulting in eruptions that will make the atmospheric problems worse. After running the numbers by Data, Geordi reckons the only viable plan is to burn off the dust and use the Enterprise to vent it, but if the calculations are slightly off they could burn away the entire atmosphere. Picard is tortured by decision, which could save thousands or kill millions, and tries to get the Professor to tell him the outcome. They have a long discussion about timelines and ethics. The Professor seems serious and emotionally distant for once. Picard decides to try and takes the decision to the planet's leaders.
Geordi stays on the planet while they do the thing, it works! The Professor is keen to leave; Picard and Worf confront him outside his vessel, they've noticed things have been stolen and want to look inside. The Professor agrees that only Data can go inside, where he sees that the Professor has stolen various small things. The Professor pulls a phaser on Data and reveals that he's actually from the 22nd century; he encountered a real 26th century time traveller and stole his ship and outfit. He plans to take things back and "invent" them, but now that he has Data he can figure out cybernetics. The phaser doesn't fire and Data makes the "Professor" leave the ship. Data explains the truth, Picard reveals that the sensors couldn't penetrate the time vessel until the door was opened, when the Computer disabled everything inside. 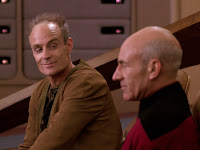 Picard wants to go back and look at the temporal disturbance after Worf notices it. He delays their arrival at the beleaguered planet by about an hour, which doesn't seem like the best choice, even if Geordi says it's OK. He's so easily distracted by shiny space phenomena, he's like a cat or something.
When faced with the difficult choice Picard tries to get the Professor to tell him the outcome. They debate time travel philosophy and ethics with the Professor pointing out he can't do what Picard wants. The Captain tries arguing that this is a real situation involving people's lives, not a hypothetical and references his own prime directive breaches as examples of doing the right thing. It's all very eloquent and impassioned, naturally. The Professor points out that everyone already died from his point of view, then accuses Picard of trying to manipulate the future. This line will be parroted ironically back to him when Picard learns of the truth of the Professor's plan.

The Professor refers to Data as the Gutenberg Bible or Model-T of androids, suggesting there are more in the future. Data corrects him as he's actually the second prototype, not the first. Then Data asks if he's still around in the future, seeing as how he doesn't have a limited lifespan the way everyone else does. The Professor chides Data for curiosity, while also getting him to dry his hands like a servant, it's a very weird moment. Though this does tie in to my theory that everyone who meets Data knows he's an android (rather than an alien) even if they have no reason to think androids are possible, like in this case. Also curiosity about his future existence seems like a pretty human instinct on Data's part. 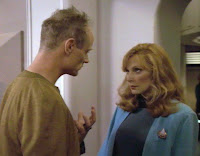 Dr Crusher is fascinated by meeting someone from the future. She doesn't ask about herself or her future, but wants to know if a plague is ever cured. Later she invites the Professor to join a group in 10 Forward and is friendly towards him (though I'm not sure everyone else is necessarily talking about him, the regular crew mostly haven't met this guy and no doubt have their own stuff going on). He's attracted to her, but either she doesn't notice or ignores it. He observes that she sees history throw the filter of medical advances. Later she's eager to help with his research and gives him a neural scanner, but when he starts flirting she shuts it down straight away, suggesting she could be his ancestor (super unsexy).**

She knows the Professor is hiding something straight away, but not even Crusher thinks that means much. Later she gets even more suspicious, sensing purposeful misdirection, but doesn't tell anyone besides Crusher, who's still not taking her concerns seriously. The Professor confronts Troi cheerfully and tries to disarm her with charm and vague references suggesting that her reaction is predictable and of no real concern to him. He also calls her "Picard's empath" not entirely wrong, but not her title nor necessarily how she would wish to be addressed. It all seems to me like a way of diminishing her and putting her down. He suggests they're similar, then he pulls the "some of my best friends are empaths" nonsense. This is not a good idea for convincing people and soon after this Troi decides to stop being polite and leaves.


Staff Meeting: 1
Near the start the Professor sits down with senior crew and explains that he can't tell them anything about the future, before giving them their assignments. Everything seems friendly and cordial. After Data takes the Professor to his quarters the conversation becomes more cautious with Picard seriously listening seriously to Worf and Riker's concerns. Picard says he's checked the Professor's credentials (as someone who has to check the authenticity of documents for a living I don't know how you could verify something from the future) and says everyone should treat the Professor well. Worf is dismayed about the questionnaires, clearly he does not respond well to surveys.

Future Is Better
Picard mentions that the climate/atmosphere issues on the planet could be like the nuclear winters of the 21st Century. This is not what I want to hear, that's where I live! Though honestly now warming is a greater threat than cooling, it's the only global measurement that is currently looking really bad for humanity. It's interesting that the scientist on the planet said they'd been so careful to avoid a greenhouse effect. 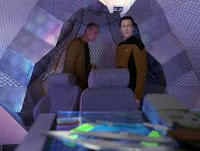 What we learn about 26th Century:
-They have time travel
-The time craft is very metallic and shiny on the inside, like it's trying to look even more futuristic
-There are still garments that look like they're made from old curtains (no idea how fashionable the time traveller was), but they have big pockets which are useful for stealing things
-A time traveller went back 400 years but didn't think to take precautions against crime

What we learn about 22nd Century:
-Humans don't have medical scanners, quarantine fields, phasers, androids, warp coils or  pads (What happened to Apple et al? Did all those nuclear winters destroy tablet technology?)
-Earth still uses the Western, Christian-based way of counting centuries.*** As opposed to whatever star dates are.

Security Breach
Oh look, another troublesome visitor. The Professor is an accomplished con artist, so even when he's explaining the truth to Data I don't believe that he was an actual inventor, that's just the persona he's now stepping into. What I don't understand (though I admit it's a niggle that could ruin the fun of the episode) is how the Professor knows who everyone is. It's fun the way he acts knowledgeable and excited about everything, whilst cleverly not having to give any definitive "future" info. He could have read the name and number of the ship on top of the saucer section, but that doesn't explain how he knows to be there at that point or who Picard is. I'm sure he's a quick thinker, skilled at picking up on things and improvising, but even so he knows a hell of a lot already. Also where was Guinan? There;s even a 10 Forward scene and she's not there, she would have seen through him super quick and probably said something awesomely cutting.
I wonder if the 26th Century guy was even more susceptible to deception than the Enterprise crew? Maybe people get less suspicious over time? It's far from the first time the crew assumed good intentions; though I think they're getting better. Riker asks about him being an imposter, because they've dealt with that before. Picard tells Worf he shares suspicions and has the Professor medically scanned to determine he's human (which they also could have done with Q at one point, so that's no guarantee of anything and it's not as though humans are inherently honest) plus the time vessel is put under guard.
Wait, the Computer can disable phasers and other devices remotely now? Picard says that they couldn't scan inside the time vessel until the door was opened, but then everything could be disabled. It seems like having the Computer disable phasers or other weapons is super useful and surely something that may need to happen again. Though I suppose there may be wiggle room there if you assume the Computer can only disable phasers belonging to the ship.

The End
The fake Professor is distraught as the auto-timer on the time vessel triggers and it returns to the 22nd century. He argues that he doesn't belong there and Picard says that actual historians will be fascinated by his 22nd Century perspectives. He ends by welcoming him to the 24th Century, which is kinda badass. 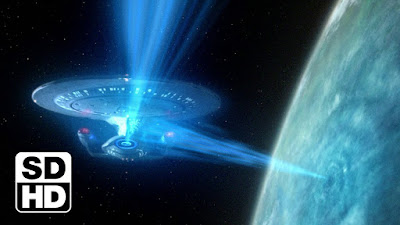 * There aren't a lot of staid and sober time travellers are there? This guy, Doc Brown, various incarnations of the Doctor, a whole lot of oddballs.
** Surely time travellers need to check their family tree carefully before going back in time. That just strikes me as good sense.
*** I get that BCE/CE (Before Common Era/Common Era) is a way of secularising BC/AD (Before Christ/Anno Domini - the year of our Lord), but it's still based on a presumed birth date of Jesus.
2017 AD is 5777/5778 AM in the Hebrew calendar (which sounds futuristic) and 1438/1439 AH in the Islamic calendar (which sounds historical). It's just occurred to me that I only know anything about calendars based on Abrahamic religions, obviously there are various other ones around the world. Time's a funny old thing, really.
Posted by Catherine Hill at 08:36