I went back to work from maternity leave last week, it's actually gone fairly well. August was a weird month, and yes there were no blog posts, but I don't think that was the cause. All the baby sessions finish at the end of July to make way for the school kids on summer holidays, so my routine got thrown out of whack and I ended up being a bit cooped up. August was also weird because my husband's work hours and location changed a bit and my father-in-law moved to our area, which was a process fraught with issues and delays.

The baby has taken to nursery well, which I'd hoped he would as he's quite a people person and not very clingy. He's also being looked after by grandparents a couple of days a week. I've restarted work at a good time of year as one work cycle is finishing and a new cycle will start next week. I'm working full time again, which feels both odd and normal, but I'm getting used to it again. Still figuring out my new routine, but I'm hoping I'll be able to find some time for blogging occasionally. 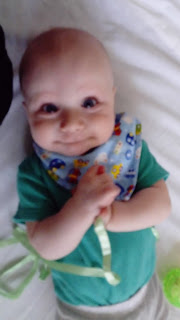