I don't usually see films on their release date. I don't actually see many films in the cinema any more (sorry Into the Spiderverse, I'll watch you some day) what with working at least 36 hours a week and looking after a toddler most of the rest of the time. Fortunately me and my husband had some time off both work and parenting when Captain Marvel came out. Yay! 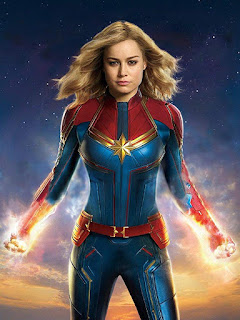 This film is so much fun! The action is good, with the plot trotting along pretty nicely. The characters are strong, especially the way they relate to each other and the way trust is built between the 2 main characters. The story isn't a continuation of a previous MCU film, hopefully making it fairly accessible to those who aren't serious fans. It's about extraordinary things happening to an ordinary person, but an ordinary persopn who worked hard as an air force pilot and who has gone through a lot. It's also about someone whose true potential is always tamped down, and told her emotions are a problem, finally realising that they aren't and she's more than any of her official superiors gave her credit for.

It is sort of an origin story, but not just for the title character, for the MCU. Set in 1995 it takes before all the other MCU films, except Captain America. In terms of Captain Marvel herself, the story inverts a traditional origin story, by showing someone who already has powers, but who also has a lot of questions and whose background needs figuring out. Along the way there's exploration of loyalty, of friendship/found family, of overcoming what you've always been told about yourself in order to become who you truly are.

I really enjoyed the soundtrack. I get that some people might see it as a bit cheesy, but it's rare that I watch a film where I recognise and remember most of the songs from around the time they came out (I mean the 80s has been a pop culture obsession for aaaages, I guess maybe it's the turn of the 90s now?). The soundtrack is used in a lot of fun ways. There's one song, which starts at the same time as a major fight, that had me burst out with joyous laughter.

Also a cat is a pretty big part of the film, and given this is the internet you're probably good with that.
Posted by Catherine Hill at 15:25