Shades of Grey by Jasper Fforde
This is one of the weirdest and most inventive fictional worlds I have ever read. And I read a lot of fantasy. 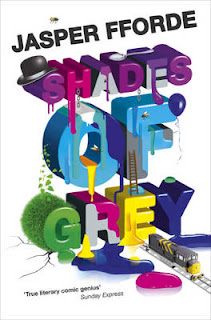 In many respects the plot of Shades of Grey is a familiar one. Naive inhabitant of a seemingly-utopian rules-based society learns more about how things really work and his faith in 'the system' is shaken when he learns the Dreadful Truth. We've all seen/read this story before, but I'm sure that it's never been done quite like this.

Shades of Grey is set in a world where people can only see one colour -or none at all. Greys -whose vision is entirely monochrome- are the labouring classes. The rest of society is made up of Reds to Purples who vie for position in a society that is base on which colour you can see and how well you can see it.
As if this premise were not interesting enough, the book goes on to create a very strict society based on rules that sound like they were taken from a 1950s manual on being a Thoroughly Good Chap (and might have been as for all I know). T
hen there are the tantalising hints about the Previous (I assume this refers to us) who existed over 500 years earlier before the Something That Happened. It becomes clear that the people in this setting are physically different to us in various strange ways.


There are so many rules in this world, many of them strange, most of them absurd. Fforde's protagnist, a young Red called Eddie, is a bit of an ingenue who discovers the seedier side of his society when relocated to the fringes with his dad. His reaction to those who bend or break the Rules tells us a lot about him, and about the society that supposedly lives by them. All this worldbuilding is told through the character interactions and the plot events with Fforde's trademark wit, meaning that the exposition becomes fascinating and leaves you wanting more.
Posted by Catherine Hill at 18:01