Recent Reading - and a bit of myth 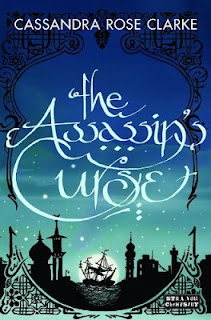 The Assassin's Curse in the first batch of books published by YA imprint Strange Chemistry, which is part of the Angry Robot imprint. Told in first person POV (as seems traditional in YA) it's about Ananna, daughter of a pirate captain, who escapes an arranged marriage and is chased by assassins for it. Due to a magical accident she ends up bound to an assassin, who must protect her from harm. They reluctantly travel together to find a way to break the curse.
The fantasy world is well drawn and not overly explained. Ananna is a great heroine, confident, brave, quick-witted and rather stubborn, she was born and raised in a world of thieves but has her own ideas of right and wrong. Seeing the world through her viewpoint means it's easy to be on her side, but it is also clear that her actions are foolish at times. The assassin is also a good character, proud, deadly and impatient he also has vulnerabilities, though these remain mostly mysterious. The interactions between the pair are beautifully done. The various characters they meet felt genuine and the situation is complex enough to absorb attention.
The story was a good one, the pace was brisk and events unfolded smoothly. I wanted to see more of the world and learn more about the characters and their adventures. My only complaint is that it ended too soon; in fact it's clear that the story has been cut in two. Weighing in at under 300 pages The Assassin's Curse is a shortish book, although that's not usual for YA. What confused me a bit is that the blurb on the back is clearly a description of the entire story, not just the half I have access to. At least one of the incidents mentioned on the back cover doesn't take place in this book, which is unusual I think. I read quickly but as I got closer to the end I realised that what approached wasn't an actual ending, just a pause in the story. I will definitely buy the next book, but just after I finished reading this one I felt as though I'd been promised more story than I actually got.

The Assassin's Curse is one of the books I bought at FantasyCon, in fact I bought it directly from the publisher, who was working the stall at the time. I only bought 5 books at FantasyCon, the other 15 or so me and my husband bought back from Brighton were all free, which is a sign of a good convention. This is how we discovered that our suitcase is not built to transport nearly 20 books, and how one of its wheels ended up disappearing somewhere on the hill between the seafront and Brighton train station.


The Song of Achilles
Madeline Miller 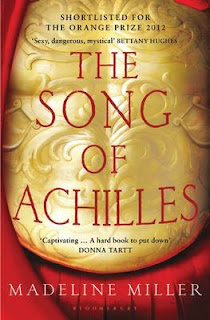 I don't tend to read books that have won mainstream prizes, often because there's not enough fantasy in them. However my husband bought this book for me because I love Ancient Greek mythology and it turns out this was an excellent choice on his part and contained more fantasy than I expected. It was an excellent and emotionally powerful read.
The novel is a retelling of the story of Greek hero Achilles, told from the point of view of Achilles' companion and lover Patroclus. According to legend Achilles was the son of human king Peleus and the sea goddess Thetis -whose son was destined to be greater than his father. This prophecy was the reason the Olympian gods (already plagued by inter-generational strife) married Thetis off to a mortal. In the book Achilles is destined to become the Best of Greeks and he will prove himself at Troy, the war that unites the squabbling Greek city-states. However the battlefields of Troy are also destined to be the site of his' demise. All the supernatural aspects of the story are kept (no wonder I liked it) with Thetis being a terrifying and unworldly presence in the book. Here we see powerful, alien, manipulative gods, not the melodramatic -if fun- squabbling family the Olympian gods are often shown as (and in fact were sometimes portrayed as such by the Ancient Greeks themselves).

The next bit of the review actually gets a bit long, since it's so tied up with a subject I love.


The relationship between Achilles and Patroclus is the emotional core of the book, and knowing what will befall them makes it all the more poignant. Miller's version of Patroclus is a good choice of narrator as he is plagued by self-doubt and is a more humane character than the battle-mad heroes. Patroclus is no warrior, a shameful thing in his society, but due to his compassion he becomes essentially a medic and popular among the Greek soldiers in his own right. Achilles is a less sympathetic character, as Greek heroes will be when seen through modern eyes. He is only half human and this is made very clear, he knows no mortal can defeat him and his pride easily turns to arrogance. Really it is only his deep and faithful love for Patroclus that makes him likeable. Through Patroclus we see that Achilles' has a softer side and that his superiority is simply a part of who he is and not ill-intentioned. In fact Achilles and Patroclus have a steady relationship and stable domestic life for years, despite being part of a military occupation. There are moments of normalness that are pleasingly at goods with the epic backdrop.

Briseis is another good character, she actually makes sense and takes action in a story where there initially seemed to be little room for the feminine. In the myth she is a prize awarded to Achilles, who is later taken by Agamemnon causing pride and anger all round and sparking off a disastrous series of events (those shown in Homer's Iliad). In this book she is the first of many Trojan women that Achilles claims at the urging of Patroclus, who wishes to spare them from the normal fate of captured women. She and Achilles have no particular connection (though other versions of the story portray them as lovers) and it is Patroclus that she bonds with. Achilles anger with Agamemnon is nothing to do with her at a person and entirely to do with ego and perceptions of respect and honour.

The only part of the book I found troublesome was the run up to Patroclus' death, which seemed to get a bit unlikely and overblown. I'm sure it tied up with what is said in the Iliad, but in this version Patroclus was more or less a non-combatant and his sudden prowess makes little sense, especially as it just seems to happen and is not presided over by any supernatural force. This is really only a niggle however.


I was initially a little confused that Achilles and Patroclus cannot admit to their feelings for so long, (though that does increase the sexual tension and emotional impact) and that their relationship is seen as shameful by others. Early on in the book it is clear that Thetis hates Patroclus and does not think him worthy of her son, so it is fear of her that is the problem. Later it is clear that a loving relationship and domestic arrangement between two men is strange and it is only Achilles' status means it is not a problem. The great are allowed to be eccentric
I tend to think of Ancient Greece as a fairly bisexual society (for men anyway), and assumed that the relationship between Achilles and Patroclus was understood to be sexual. However it occurred to me that this is an oversimplification. Athens in the 5th Century BC is often the template for assumptions about Ancient Greece, and that was what I was thinking of. Classical Athens is only one place in one period, a powerful society which no doubt imposed its own ideas on Homer's epics. The Homeric epics were probably composed 2 or 3 centuries prior to the rise of democratic Athens. The Age of Heroes stories themselves were probably based on events of the 12th Century BC, which were retold down the centuries and became myths. The stories originate in a different time and society than the one that wrote them down, and they were transformed time and again by their passage down history.
Posted by Catherine Hill at 17:51