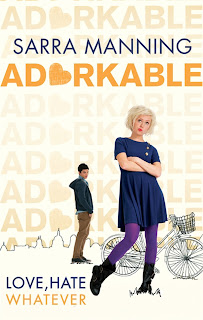 This book is about Jeanne and Michael, 2 very different British teenagers. Jeanne is fiercely independent and extremely quirky. Michael is fairly mainstream and does what's expected of him. Jeanne and Michael have nothing in common (except that their exs have got together) and don't even like one another. The complication is that they keep kissing and neither knows why.

This story is refreshing because, although it's largely about a relationship, it isn't saying that the person you go out with in your late teens is your tru love 4eva. It's not even saying that you have to have a huge spiritual or emotional connection to someone in order to be physically attracted to them. While I'm very much in favour of stable, supportive, romantic relationships (which isn't necessarily what one gets in the modern literature), that isn't everyone's experience. I sometimes wonder about whether all the YA books that talk about teens finding their soulmates aren't a little unrealistic and miss out/ignore aspects of romantic experience.
The chapters alternate between Michael and Jeanne, so that the reader gets both sides of the story throughout the book. Both have issues, though Jeanne's are more problematic, and both treat (and think about) the other unfairly at points in the story. Initially Michael thinks Jeanne is ugly and weird, and Jeanne thinks Michael is boring and unimaginative, in both cases these assumptions are harsh. As they learn more about each other they become closer and more tolerant, but they are still very different people and we see the characters' petty weaknesses as well as their strengths.