It's a holodeck episode, which means things are going to go horribly wrong. However they're going to go horribly wrong while people wear amusing costumes, and in this case there's also various hats.
It turns out I will forgive/ignore a lot where amusing hats are involved. Over Christmas I saw the Rex Harrison Doctor Dolittle film, and though it was sexist there was briefly a dolphin wearing a top hat (it is a very strange film).

What Happens
Geordi calls Data to Engineering to look at the model ship he's built. Then Geordi suggests they do something relevant to Data's interests and offers to be his Watson. They reconvene at the holodeck in Victorian costumes, including amusing hats! Every holodeck scene from now on is full of period costume and slightly overdone Victorian London. In Holmes' study, Data rushes around touching things, then solves the mystery in a few seconds. Geordi, who's playing along but isn't haven't as much fun as he'd expected, leaves. 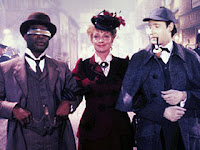 Later, in 10 Forward, Geordi explains to Data that he was supposed to figure things out. Pulaski turns up and is again bemused by people insisting that the robot-man is a person or something. She and Geordi make a bet to see if Data is capable of deductive reasoning. They all return to the holodeck  in period costume (Pulaski's hat!). Data quickly figures out that the computer has merged a few Conan Doyle plots. Pulaski insists this isn't good enough, so Geordi tells the computer to create a worthy adversary for Data and purposefully sets no parameters - we will remember this later. 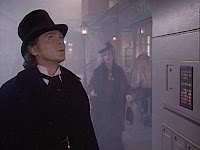 The environment the holodeck becomes more sinister. One of the characters is able to see the arch and realises something is not right, he becomes Professor Moriarty. The Professor can access the Computer and, unrestrained by setting-based info, is able to make astonishing and unlikely leaps of logic.* He kidnaps Pulaski and gets Data to track him down. Data is horrified by Moriarty and tries to shut the holodeck down but can't. Moriarty has realised that he's in an artificial environment that's being carried inside something that looks like a turtle (as good a comparison as anything).
Geodi and Data have to leave Pulaski and report the situation to Picard. Data reckons that the only way the Computer could fulfil Geordi's instructions was to create a self-aware character. As they're figuring out what to do the ship wobbles, Moriarty uses a steam engine and lever to control the ship. Picard dons a costume (including top hat and cane) and joins Data and Geordi in the holodeck. Moriarty, the criminal genius, feeds Pulaski tea (because that's what we do in the UK) and asks her questions.
The holo-London is all foggy and sad-looking, which apparently means Moriarty has more control. Someone tries to mug Picard and they realise that the character could have actually hurt Picard because the mortality fail-safe has been circumvented. Picard confronts Moriarty and they speech at each other. Data tries to forfeit the game, but it's gone past that now. Moriarty claims that because he can think he's alive, so shutting down the programme will be murder. He's disappointed that he cannot leave the holodeck and aftre making his point basically gives himself up. Picard doesn't want to kill him, so they save the programme meaning Moriarty will effectively be in stasis 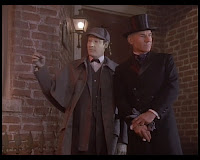 Picard is brought into the action when Data and Geordi realise that their game playing has become dangerous. Once the situation has been explored Picard dons hat and cane (yay!) and goes to confront Moriarty.
Picard saves the day by having a discussion with Moriarty in which they speech at each other about definitions of life. Speeching is Picard's special skill, so Moriarty soon gives himself up, but Picard does the Right Thing and doesn't end his existence. Given how the episode started I did expect a bit more action, scheming or a greater battle of wills. It didn't seem to have much to do with deductive reasoning so much as just having a discussion. 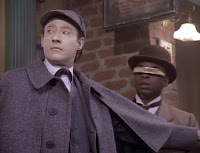 Data's attempt to have fun initially involves racing around a recreation of Holmes' study geeking out and quoting from the texts. Since I can't describe myself as a Conan Doyle fan (I've read a few Holmes stories and enjoyed them) this scene was perhaps not as thrilling to me as it might be to someone with a greater interest in the fictional detective. Data really gets into the role and assumes the kind of English accent that sounds like he should be wearing a monocle (at no point does he wear a monocle). Data's knowledge of the source material means that he is able to solve the mystery in seconds.
Data is alarmed when he realises Moriarty has become self-aware, and can access the arch and computer. Moriarty has a huge amount of information and has little difficulty understanding the reality of his situation.

Geordi has spent time building a model ship as a present for someone we never see. Apparently Geordi has a lot of free time on his hands, though I guess he's now in charge of a huge staff of engineers. Maybe he's good at delegating. Geordi (like so many human Star Trek characters) has an overly-romantic fixation on the past. He is interested in naval history and ship design and goes on about wind and sails.
It's nice of Geordi to want to do something that Data will find fun, and the Holmes and Watson holodeck game shows how well he knows the android. However it's not surprising that Data's version of fun differs from the norm. Geordi tells Data he's been doing it wrong, even though that probably isn't Geordi's call to make. On the other hand you can tell that Geordi was really hoping for a chance to play. Making bets with Pulaski about whether Data is capable of deductive reasoning could be a sign of confidence in his friend, but also suggests that Geordi is just in a game playing mood. This may explain why Geordi gave the computer too much free reign in designing a game suitable for Data. Really this is all Geordi's fault, as Chief Engineer he should know what limits to set on Computer instructions. He should have made sure the mortality fail-safes were in tact, because that should be his first priority. At least Geordi acknowledges what he's done and apologises. 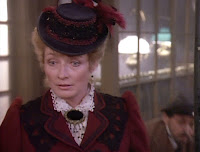 Pulaski's bet, which never gets resolved, is a continuation of her scepticism about Data. I can understand that having a new character is a great opportunity to question Data's abilities, but she's starting to seem stubborn and short-sighted by continuing to ignore the assessment of the crew (and Starfleet) where Data is concerned.
While Pulaski is Moriarty's captive there's a very weird dynamic between them. It's no surprise that he questions her and she won't answer. Him giving her tea fits with the genial, English villain archetype. He tells Data he'll harm her if necessary, but he shows no sign of this in his interactions with her, and seems almost fond of her. There's a weird sense that there's been flirting (or something) we haven't seen. Before Moriarty is about to be saved Pulaski comments that she may be an old woman when he sees her again, as if this is relevant. There's also the crumpets.
Moriarty gives the Doctor crumpets. At one point she stands up unsteadily, hiccups and mentions 'being crammed full of crumpets'. I feel I should point out that crumpets should not be alcoholic. Moriarty later says something about filling her full of crumpets. The language used (cramming, filling) seems a bit dodgy, and I honestly wonder if there has been some misunderstanding about what crumpets actually are. 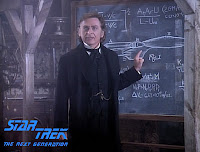 You'd think that a thing called a mortality fail-safe should be rock-solid and not be capable of being circumvented. If they are, the Computer should confirm whether you really want to do that.
I'm not sure how building a holodeck steam engine allows someone to control the ship, that seems like another thing that shouldn't happen. Things in the holodeck aren't real and shouldn't connect to moving parts, though I guess everything is computerised and that's what Moriarty has tapped into. I suspect the holodeck on the Enterprise has gotten too plumbed-in to other systems on the ship. It should operate more independently than it does.

Staff Meetings: 1
Data and Geordi tell the other main staff what happened. There's the usual discussion of tactics. Worf suggests an armed security response. Geordi comes up with a tech solution, but it's no good as it'll harm Pulaski. Troi senses something. Picard finally decides to get involved.

The End
Geordi's model ship was slightly damaged when Moriarty shook the Enterprise. Picard is fascinated by it, far more than Data was (Picard Likes Old Stuff). He introduces Geordi to the phrase "shipshape and Bristol-fashion", an old naval term. Something tells me that "Bristol-fashion" is not a French naval term (Fringlish). 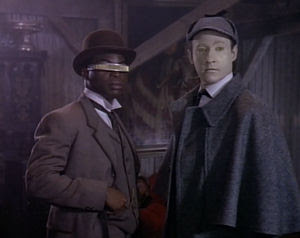 * This appears to be an artificial being displaying the very deductive reasoning that Pulaski is dubious Data has -suggesting that actually Data isn't that special. Later, Data will suggest that the Computer has given Moriarty consciousness, meaning that the Computer is ridiculously powerful and surely Data just needs an upgrade or something.
Posted by Catherine Hill at 10:00