I actually saw this a few weeks ago, but figured I'd leave my review until more people had the chance to see it (I wouldn't want to be accused of being topical). This post contains spoilers. 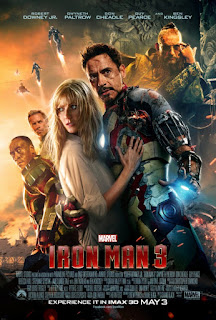 I really enjoyed Iron Man 3, it is definitely better than the second film, and possibly better than the first. The first film successfully launched the character into the mainstream consciousness, which is quite a feat so this one was building on that foundation. On the other hand the first was by necessity an origin story, and so was constrained by that, though it worked in such a way that those constraints weren't clear. As the first Marvel Studios film post-Avengers (Assembled *sigh*) it was going to be interesting to see how the hero would fit back into his own story after the expansion of the heroic universe. It was also necessary to prove that the Iron Man franchise could rise above Iron Man 2, which was only OK and clearly something of a placeholder. I'm pleased to report that Iron Man 3 managed to do these things and more, not only being better than 2 (which was my base expectation), but in fact being really good.

The story is more intimate, which makes sense as it could hardly be, or even try to be, more epic than  Avengers. Bringing the focus back on Tony Stark as a man, and how that man copes with being a hero, was a good choice. For a time Tony is forced (more or less) to rely on his own wits and must rebuild Iron Man the suit, in the process he realises that he truly is Iron Man. while I suspect he was not quite as cut off as the film would have us believe, I think that getting Tony away from his established workshop were he could constantly tinker (and the climax shows just how much tinkering he was doing) was good because it gave him focus and reminded him of his own abilities.

The interactions with the small-town child were pretty good. Adding children to a film that's not about family and has an adult main character can be iffy, as they easily come across as annoying to adult viewers. In this case the kid actually worked really well. Tony never talked down to him, and the kid didn't give Tony any quarter either, so their scenes seemed much more equal than such interactions usually are.

I liked that Tony was profoundly affected by the events of the Avengers film, but that the specific events were only mentioned briefly. What's important is the effect those events (most particularly almost dying after going through a wormhole/portal and seeing massed ranks of aliens*) had on him. I think the portrayal of Tony's panic attacks is well-handled and an excellent example of a sympathetic portrayal of mental health issues. Tony is not treated as lesser because this is happening to him, it is framed as an expected consequence of what he went through. Even a questioning child is simply curious and displays no judgement of him. The person who seems most annoyed by and judgemental of the panic attacks is Tony, which is fair enough as he's the one having them. He even acknowledges that he should get help, albeit quickly and in an off-handed way and then admits that he probably won't. This fits the character and again is not treated with judgement. These are complex issues and they're dealt with quickly but not clumsily. I've noticed that some people seem dissatisfied that the panic attack storyline was not resolved in the film, but frankly it would have been a cop-out if it had been.

The villain was handled very well. There was an understandable level of concern over using a villain called the Mandarin who was basically written as 70s yellow peril, how could that possibly play out well? They managed it, and in hindsight I'm quite impressed that the secret stayed unspoiled. The reveal that terrorist leader, the Mandarin is in fact Trevor Slattery, a junkie actor from London who plays the role for cash, was brilliant. I'm also impressed not only by Ben Kingsley's performance (which could have gone badly wrong in the hands of a lesser actor) but also in what he said in pre-publicity. I read an interview in which he talked about how theatrical the character was and how he manipulated his image, it just ties in so well with both what the character was and how he was used in-film.
I also liked the henchmen. Rather than being faceless goons they did appear to be actual people. There was some great comedy derived not only from the guard's amusement at Stark's unlikely and increasingly manic threats, but also from the henchman who immediately pleads for his life and says how much he hated his job and weird his bosses were. Why don't more henchmen do that?

Again Pepper saves the day, as she did in the first film (I don't think she did in the second, but I don't remember the plot too well). This time definitely taking the real villain out herself, and I thought it was interesting that she ends up having being super powered where Tony isn't. I think that could be an interesting dynamic going forward, but the ending doesn't make clear how much that situation will remain. I also like Pepper's attitude throughout most of the film, she seems to be the only thing keeping Tony connected to reality, and though that in no way stops him from doing stupid stuff she makes sure he knows how stupid it is. I kinda liked that the main villain wants Pepper for his own creepy reasons, but even he is ashamed enough to baulk from saying it bluntly. It makes clear just how repellent it is, and suggests that he still holds her in enough esteem to want to pretend that's not going to be the arrangement.

I like that Tony has a fandom, and is able to use that to his advantage without harshing the squee of his fan, even if the guy was a bit OTT. Actually the slightly amateurish-but-recognisable tattoo made me think of the science brothers fandom, which I'm bemused by but ultimately think is a good thing. So that was already in the forefront of my mind when Bruce Banner appeared at the end of the credits. I'm sure the science brothers fandom were greatly pleased by that.

The things I didn't like are just niggles, mostly do to with the final big action sequence.
I never felt as though Pepper was in any real peril. I knew that she would pretty much be immune to physical harm so didn't feel emotionally invested when she seemed to die.
All the suits at the end were a bit confusing, as they were just a series of flashes and movement. I couldn't tell what they were all for or how most if them were different. It also seemed a contrived that when Tony needed a suit he could simply fall into one, unless the plot was better served by him being unable to do so.
As I say, niggles really.

* I believe that of all the Avengers featured in the film, Stark was the one who would have been most profoundly affected by that sight. He's the only entirely human civilian on the team, and is also a man with a superiority complex who's used to being top-dog. It would have been a bad experience for anyone, but Stark had the least preparation for such a sight.
Posted by Catherine Hill at 16:24