I don't really understand this episode title, I was expecting something to do with a sun. I like the way the B-plot panned out.

What Happens
The Enterprise goes to a starbase because of some kind of mechanical situation that needs a second opinion. The systems are being checked by inspectors. Geordi isn't happy about this affront to his professional pride, but no one seems to care how he feels.

Daddy Issues*
Picard tells Riker that he's been offered a promotion to Captain of the Ares, he's got 12 hours to think it over. A civilian attache is sent to brief him on the Ares dangerous mission, it's Riker's dad, Kyle. There are clearly issues as they haven't spoken in 15 years and Riker is very cold to his father.

It turns out Dr Pulaski and Kyle Riker used to be in a relationship, and she could've been Riker's stepmother. She has 3 ex-husbands and is friendly with all of them, but Kyle was never properly in touch with his feelings. Will is a bit freaked to see his father and the doctor have a history, he knew nothing about it, and he gets slightly stroppy at them.
Riker Senior hands Riker Junior the briefing on a disc. He didn't have to come, it was all a pretense to see his son again. Will rebuffs Kyle, probably because he's not the slightest bit apologetic about how bad a parent he is, then brings up Riker's dead mother.
When Troi meets Kyle she detects that he's proud of his son and jealous of him too. She suggests he should examine why he feels competitive towards his son. Kyle believes Will will take the Ares promotion because it's a dangerous mission, for a man who hasn't spoken to his son in 15 years Kyle is fairly confident about this opinion.
Will apologises to Pulaski for his earlier stroppiness. She explains that she would have married Kyle but his career came first. She also tells Will that his father suffered badly from survivor's guilt after a tragic mission. 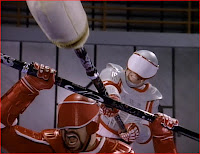 The 2 Rikers argue and Kyle suggests they move the discussion to a martial arts ring, that's is the kind of father this guy is. They gear up and take part in Armoured Martial Arts Game, which involves sightless helmets, a ring and sticks. Kyle is really proud that he has never lost against Will, it turns out he was cheating for years so that he wouldn't get beaten by his own son. He's a bit of a bastard really. As they fight old issues come out, mostly stuff about Will's dead mother and Kyle's inability to communicate. Kyle tells Will he loves him and they hug briefly, but it's horribly tense.

How to cheer up a friend (a Wesley Crusher guide)
-You notice that your friend reacts angrily when you start up a conversation about how you both have dead fathers. You friend is an angry individual, but even so you suspect that something is odd about this interaction.
-You talk to other friends about it. One is unhelpfully distracted by work stuff and doesn't want to get involved. The other is an android who apparently doesn't understand or experience emotions, he agrees that something is up and suggests you take a scientific approach. You decide to discreetly observe your angry friend, even though your stealth skills are limited and he is a short-tempered warrior who is particularly irritable at the moment.
-Your android friend tries to cheer your angry friend up, but in the process tells your angry friend that you have all been discussing his behaviour. This does not help matters.
-You research into your friend's culture and discover that it's an important anniversary and he has none of his own people to share it with. You and the android arrange a traditional celebration for him. Various people are invited, though some have reservations about what such a gathering will be like.
-Your angry friend is brought to the celebration, which largely involves him being attacked by rows of holographic warriors yielding painsticks. It's very intense and kinda confusing but your friend is grateful and in all honesty that's the most important thing.


Oh Captain My Captain
Picard apologies to Riker for being so grumpy when they first met, then tells him about the promotion. Riker goes to Picard for advice several times during the episode. Picard tells Will how proud he is, but in a non-pushy way, unlike Kyle. Picard also frames Riker's choice, it's the difference between being first officer on a major ship or having command of a ship that he can make his own. 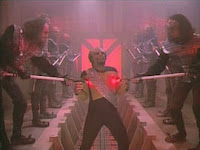 Klingon Warrior
Worf visits Riker in his quarters and requests that the Commander take him along to the Ares if he decides to go. It's not clear whether Worf wants to protect Riker or is looking for a post that will provide more combat opportunities. I can't help noticing that this request comes after Data tells Worf that other crew members are gossiping about him.
While I think that Worf not wanting to talk to Wesley about his dead father is perfectly acceptable and not strange, it's nice that various crew care about Worf and want to make a familial gesture for him. It's way less messed up than the Riker family, even including painsticks.

Counsellor Pointless
Riker says goodbye to Troi when he decides to take the promotion. She says that she can't read him at that moment. They both declare they are sad, she cries and they hug. They may be well-matched but they are not the most interesting couple.
Troi brings Worf to the holodeck for his ceremony. Worf is grumpy and Troi points out that the surprise was all Wesley's doing. He asks if she's coming in and she says no, in the tone of a person who wouldn't be seen dead at such a function.

Poor O'Brien
O'Brien is in 10 Forward with Riker when Kyle and Pulaski are reunited. He also faces sarcasm from Geordi over the engine checks that are going on in the background. It's the first time Geordi has made clear he's unhappy with the situation, but by that point everyone is helping Worf, so he missed his chance to be focus of the B-plot.
O'Brien agrees to go to Worf's surprise ceremony. Having seen what Klingon celebrations are like I'm surprised he later agrees to go to Worf's bachelor party on Deep Space 9.


Girl Talk
Pulaski and Troi discuss Worf's ceremony and the doctor makes a comment about humans being past 'barbaric display'. Troi points out that the Riker vs Riker grudge match would suggest that's not true, then says it's because they're men. It seems human males are unique because they have generational issues and never really grow up.** Then both women conclude that might be why they're attracted to them. Apparently men are like children and that's attractive, which isn't worrying at all.
This in no way passes the Bechdel test and also fails my own personal Gender isn't a Categorical Difference test (which was recently proved, by science). It seems like the kind of thing I'd hope people in the future would be less hung up about.

The End
Riker walks onto the bridge and asks Picard's permission to stay. The Captain grants it and Riker resumes his duties as though everything is normal. Picard asks why Riker wants to stay, in tones of mild interest. Riker says that the Enterprise is the best place for him to be. 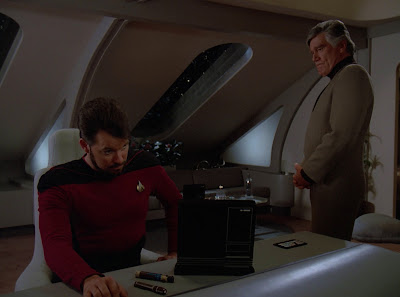 * Daddy issues are everywhere in US TV and film. I assume it's a stock motivation as I refuse to believe that most of a continent of real people actually has daddy issues. I suspect it's just most of the entertainment industry.

** Human males, what do you reckon? This seems a bit unfair to me, but I can't speak from personal experience.
Posted by Catherine Hill at 19:53