Welcome to Sandman summer, I hope you enjoy it (if you're one of the people who comes here for the Star Trek posts, I plan to continue doing those too). Comments welcome. Sandman is one of those works I'd really like to talk about more, though it doesn't come up in conversation all that much.

The Sandman graphic novels are intended for mature readers and though this post doesn't go into explicit detail there is discussion of events in the collection. Just so you know.

Preludes & Nocturnes collects the first eight issues of Sandman and shows the series finding its feet. The first issue sketches the circumstances surrounding the capture of Dream and his seven decades of imprisonment. The story is strong and encompasses a variety of viewpoints beside the titular character. The passage of time is shown effectively through the changing circumstances in the household of Dream's captor, Roderick Burgess, and the condition of the sleepers affected by the Dream Lord's sudden absence. There are glimpses of complex relationships between people, an element which works so successfully in the rest of the series. 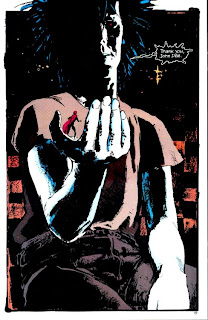 The next six issues detail Lord Morpheus's far from triumphant return to his broken kingdom, the Dreaming, and his quest to regain three objects of power lost after his capture. Searching for his pouch of dream sand means the Sandman joins forces with John Constantine of the Hellblazer comics. To retrieve his helm Dream must travel to hell, where he encounters Lucifer and bests a demon in contest. Dream contacts the Justice League to find his ruby, which contains much of his power. Meanwhile Dr Dee, a dangerously insane supervillain, hunts for the gem and uses it to send the world slowly mad. During their confrontation Dee destroys the ruby in order to kill Dream, but inadvertently empowers him instead.
These stories link with the wider DC universe far more than any other part of the series, something that isn't always successful. I realised there were references to pre-establiahed characters and comics, but I only fully understood some of them. I had no history with John Constantine or the Martian Manhunter, though I understood Arkham Asylum and the Scarecrow. Much more successful are the horror aspects in the story, which I can appreciate though I'm not usually a horror fan. Dr Dee is a twisted, awful person, as well as being rather pathetic and nearly sympathetic. '24 Hours' barely features Morpheus, starting the tradition of issues in which the Sandman plays only a brief role. Instead it details 24 hours in which Dee slowly and terribly uses the power of the ruby to torture people in a diner, whilst wreaking havoc on the unconscious minds of the wider population. It is one of the darkest and most horrible things I have ever read, which is why I'm glad I didn't start with this collection. I might not have gone back to the series if I had. The issue had strong characters who felt well rounded and were brutally destroyed.

The final issue 'The Sound of Her Wings' is beautiful. It introduces Dream's sister Death, one of the most popular characters from the series. She's friendly and perky, but isn't afraid of telling her younger brother off for being self-centred and self-pitying. It's a wonderfully comic scene and one that establishes the strength of the relationship between these siblings. Death missed her brother and was worried about him, though I do always wonder why Death and Dream didn't communicate when she came for Roderick Burgess. Dream accompanies Death as she goes about her work. In contrast to the killings in the last few issues these deaths are treated with reverence, and show how Death respects each individual, even though they aren't happy to see her. In the end Morpheus has a renewed sense of purpose and the final panel is one of the most joyful images we ever see of Dream. 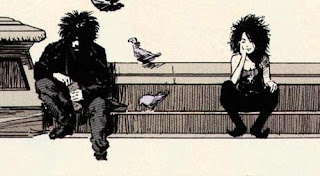 Preludes & Nocturnes is actually the 5th Sandman graphic novel I read. Though there are numbers on the spines I initially chose the graphic novels based on which sounded most interesting to me, which was probably a good thing. I remember that I first read Preludes & Nocturnes during my first semester at university. I was in my room on the top floor of a university hall of residence. I remember this because after reading I felt kinda freaked out, especially having read '24 Hours' and wanted some company. All my flatmates were out, so I went downstairs to hang out with people I knew in a ground floor flat. Though I had -and still maintain- a kind of vampiresque horror of going to other people's homes uninvited that somehow didn't apply whilst living in uni flats.

Art
The first and last panel of first issue 'Sleep of the Just' are the same view of Fawney Rig, the mansion of Roderick Burgess, which is inherited (along with it's basement captive) by his son Alex. Despite the decades that have passed the house itself has not noticeably changed, perhaps it's the only thing that hasn't. 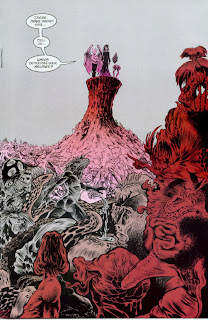 After Morpehus escapes he is naked and has to scrounge for sustenance in dreams before he can create clothing for himself. Morpheus's lily-white arse is clearly displayed in one panel. Having read later collections first, I'd come to think of Morpheus as grave and kingly, so it was a bit of a surprise to see him like that the first time.

The trip to hell gave artist Sam Kieth an opportunity to display a lot of mad landscapes and grotesque creatures. The story in 'A Hope in Hell' is OK, though there's a lot of references to Hell's politics that don't really engage me, I assume they relate to things happening elsewhere in the DC universe at the time. The art however is wildly inventive and interesting, meaning the background is sometimes more interesting than the plot. It also introduces a version of Lucifer who's a dead ringer for David Bowie's Thin White Duke.

In several panels, especially those showing Dream travelling or using his influence, there are dreaming faces. These come in two forms, either diverse human faces surrounded by darkness, or vaguer face-shapes appearing in cloud-like formations. This is a visual theme that is used at various points in the series, especially when invoking the power of dreams.

A constant feature of the many faces of Dream is that his eyes are dark spaces with light inside. However in a comic moment in 'The Sound of her Wings' Death throws a loaf of bread at her brother's head, and Dream is shown with what appears to be a human-looking eye. I can't remember if that actually happens again in the series. 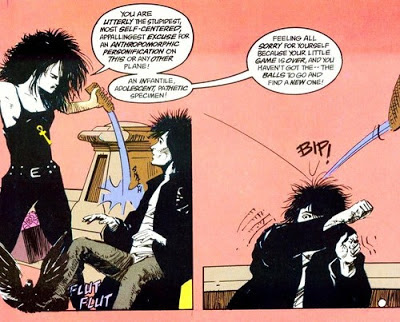 I talk about elements of foreshadowing under the cut. On the one hand it seems silly to worry about spoiling a 25 year old series. On the other hand, if you haven't read to the end of the series there's stuff you might not want to know. It's impressive that even so early on there are themes, dialogue and events that have greater significance even at the very end of the series.

Next week: The Doll's House

Unity, a woman who sleeps almost non-stop for decades, unknowingly has a baby which is quietly sent away for adoption by her wealthy family. It's mentioned that she dreams of a dark-eyed man, clearly Dream. As we discover in the The Doll's House Unity's far more clued up on what's going on than even Dream himself.

Morpheus summons the Hecateae (Maiden, Mother and Crone) who appear in various guises throughout the series. They mention some of the other names and incarnations they go by, including Tisiphone, Alecto and Magaera. These are the the names of the ancient Greek Furies, also called The Kindly Ones.

In 'A Hope in Hell' Lucifer quietly swears that he'll destroy Dream some day. Dream left Hell after successfully disputing Lucifer's claim that dreams (as opposed to Dream) had no power there. Lucifer's vow has some very interesting ramifications for Dream later.

While in Hell Dream encounters Nada, a woman he loved but cannot forgive. She is trapped in hell because of whatever happened between them. She begs for him to release her, but he refuses to offer her forgiveness or freedom. This is something that Dream will be scolded for my his family in Season of Mists. During his interaction with Nada Dream's face appears more African-looking.

Bette, diner waitress and secret writer, always writes happy endings because she knows when to stop. "If you keep them going long enough they always end in death." This has great resonance with the end of the series. 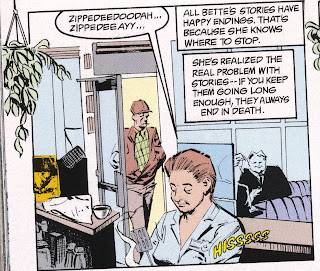 In the diner Judy phones her friend Rose to try and track down her girlfriend Donna. Rose is the main character in The Doll's House and Judy (under a new name) first appears in A Game of You.

In the penultimate issue 'Sound and Fury' Dream treats Dee with far greater mercy than he showed to Alex Burgess in the first issue 'Sleep of the Just'. Though personal change is meant to be anathema to Morpheus, it is clear that even this early on he is capable of it, even if he would not see it himself.

Is that Merv Pumpkinhead? The bus driver Morpheus talks to while travelling through dreams does look like an inhabitant of the Dreaming who turns up later. Merv will even make a comment about driving a bus.
Posted by Catherine Hill at 16:36