What Happens
Wesley and Picard take a trip in a shuttle, this worries Wes more than the exams he's going to take. Picard is leaving for a discreet medical procedure (not a facelift or anything like that). Wesley asks various awkward questions to fill the silence, I guess he forgot to bring a book or music. 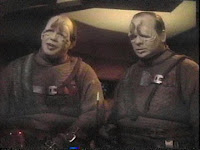 Riker responds to a distress call from some apparently dimwitted aliens with fluffy, vertical eyebrows. They barely seem able to figure out how their ship works and Geordi is sent over to help, despite Worf's reservations. I realised that the aliens were going to try and steal Geordi (I was reminded of Firefly episode 'Safe' in which hill folk abduct Simon because they need a doctor). Troi warns that Geordi is in danger, no one really does anything until after the aliens have managed to trap the Chief Engineer on their ship.
A plan is developed to save Geordi, who has to do most of the work in his own rescue and deciphers a vaguely cryptic message Riker delivers over a hail. The slightly confusing plan, which may or may not involve firing on the Enterprise, seems to work and Geordi is beamed back.
Picard's simple heart procedure goes awry and Pulaski is the only doctor who can save him, ironic as Picard went to the base so that she wouldn't do it. Geordi is saved just in time for the Enterprise to take Pulaski to save Picard, who is decidely grumpy when he wakes up.


Oh Captain, My Captain
Picard gets all proud and defensive and refuses to undergo a heart procedure on the ship with Pulaski, even though she's an expert. It seems Picard is terrified that his medical information will become ship gossip. This suggests that he doesn't trust the discretion of Pulaski or the medical staff, which seems unfair. He refuses to tell Riker why he's going on a sudden trip to a starbase, so Riker assumes the Captain is hiding something work-related from him.
On the shuttle trip Picard grumps at Wesley, who's mostly trying to fly the shuttle and control his nerves. Then Wesley asks personal questions, which Picard deals with fairly well. Picard eventually tells the story of how he was stabbed through the heart in a bar fight when he was a cadet, which is why he has an artificial heart that needs replacing. Young-Picard was clearly quite a hothead.
Picard is really grumpy to see Pulaski when he wakes from surgery, which is unfair as she saved his life and all.

Riker: lover, adventurer, middle-management
Riker underestimates fools easily and doesn't listen.
The Chief of Security is warns him not to send the Chief Engineer to a strange ship. Troi warns him that all is not as it seems and yet Riker takes no action. When it all goes wrong, as Worf suggested and Troi predicted, Riker comes up with a ruse to get Geordi back and sends the engineer an unsubtly coded message. When Pulaski is ordered by Starfleet to come and save Picard, Riker delays to ensure Geordi can be brought back. It's not what Starfleet wants, but you just know Picard would be furious if Geordi couldn't be saved because of him. 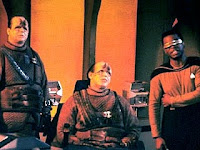 Blind Engineering
Sometimes it seems that Geordi is too nice for his own good, which I can relate to. Though he's incredibly irritated by the eyebrow aliens and their dumb questions Geordi keeps fixing things for them and being vaguely polite. When they injure and abduct him Geordi gets angry but realises that he's in no position to actively resist. He figures out Riker's coded message and does (or maybe pretends to do) something, so that the aliens drop their shields and he can be beamed back. I'm assuming there's a reason Geordi couldn't reduce the shields while pretending to do something else. I'm also not sure how much those aliens were pretending to be stupid. 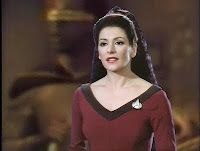 Counsellor Pointless
Troi successfully senses a threat to a crew member. Hurrah!
Of course, for once, she's not actually on the Bridge when unknown aliens present an unseen threat. After Geordi beams over she senses he's in danger and that they're being deceived. She rushes to the Bridge to tell Riker, it's a shame that he barely listens to her warning, otherwise everything would be fine. [Insert comical reference to Cassandra of Troy, preferably including a play on Troi's name.]
Even Data points out that Troi has ESP and Riker still doesn't think there's a threat.

The Boy
It turns out Wesley asks awkward questions when he's nervous. At first he asks Picard about the cardiac procedure, which is fair enough as Picard brought it up in the first place. Then Wes asks questions about Picard's personal life (which might be a sore subject for all he knows). Picard warns Wes about commitments affecting career.*

Wesley: No problem. Where women are concerned I am in complete control.

What does that even mean? I'm not sure what context I should be taking those words in. I'm hoping its just youthful bravado. If not Wesley seems delusional or maybe a little creepy.

There follows the touching story of how a young Picard lost his heart, literally.
Picard comes over all avuncular and advises Wesley to study history and art and not just focus on what's in his exams. On their return to the ship Picard announces that Wesley is allowed to continue studying on the Enterprise. 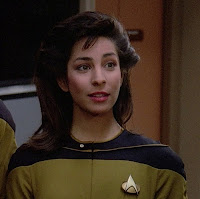 Randon Crewmember
Ensign Sonya Gomez appears again in this episode (after making her debut in the previous one). She and Geordi chat to Wesley about his exams and his upcoming trip with Picard. She advises that Picard knows about a lot of subjects and Wesley could really learn from him. Despite being new she knows how erudite Picard is.
Sonya is involved in the plan to rescue Geordi. She expresses concern for Geordi and asks questions, not that the answers really explained what was happening for me, though she seemed to know what was going on.

Before Geordi is beamed to the alien ship (just after I realised how the plot was going to go), Worf queries whether they should send their Chief Engineer to fix a strange ship. Riker treats Worf like he's being paranoid and obstructive. Worf is just doing his job, he rightly points out they don't know anything about the aliens, but yet again no one listens. Poor Worf. [Do not insert reference to Cassandra of Troy, Worf's name doesn't really sound like anything.]
The crew of the Enterprsie just love sending people into situations without adequate security, nearly as much as they love letting strangers wander around their ship and freely access their systems.

The End
Picard's return to the Bridge is met by applause. He barely acknowledges it then warns everyone that there will be no more talking about his brush with death.


* Seriously, Starfleet is terrible for families.
Posted by Catherine Hill at 15:38