It's been over a year since I posted about sewing. Mostly because I haven't been doing much of it. However there is something I made earlier this year that I'd like to mention.

If you've been reading this blog for a while you'll know that I used to work in a public library. You may also know that I left the library in mid-April. As a leaving present, because I wanted to do something a bit personal, did some crafting and made something that could be put on display.

The cover itself comes from a large format picture book of the Gruffalo. It was a library book but had been damaged, so I thought I could recycle it creatively. 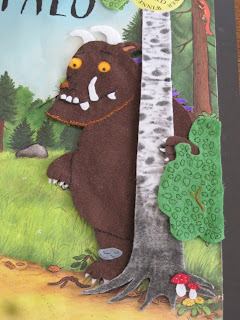 The award medallion at the top caused me some trouble, but I figured it was best to work around it. I sewed a lot of leaf shapes, but actually found it pretty relaxing. 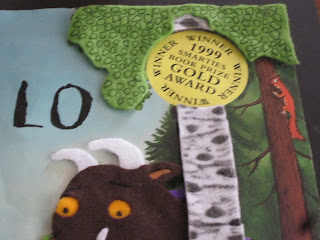 The mouse was really fiddly as he's much smaller. Plus he kept coming unstuck, probably because he had smaller surface area for glue and I used a few layers of cardboard to raise him up a bit. 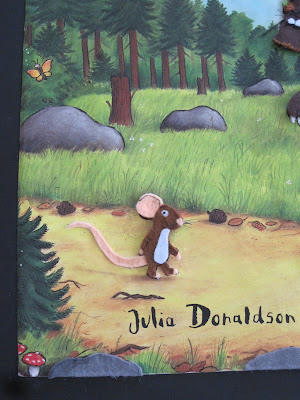 The last things I did were the little foreground details like the rocks and the mushrooms at the base of the tree. The base of the tree was tricky because I had to make sure the roots lined up with the picture on the cover, but I think it looks alright.