"The Sisko is of Bajor." Oh no, wait, wrong Emissary and wrong Trek series.
This is a Klingon episode, with evidence that Worf used to have a social life. There isn't a B-plot.

What Happens
The episode opens with a poker game. There's an emergency message from Starfleet. An Admiral orders the Enterprise to rendevous with an emissary, it'll be tricky because the emissary is coming in a 1-person probe, and they'll have to catch it. The music is tense for the intercept, but the probe is beamed aboard and a half-Klingon, half-human woman gets out unharmed. 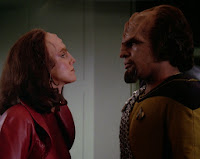 K'Ehleyr (the emissary) explains that an old Klingon stasis ship full of Federation-hating crew is approaching. The Enterprise is ordered to meet the ship and make clear the war is over, but K'Ehleyr thinks they'll have to destroy it. Picard wants other options and makes Worf work with K'Ehleyr even though its clear they have bad history. Troi and K'Ehleyr discuss different experiences of being half-human. When Worf and K'Ehleyr work together they argue about their old relationship and about whether there's any option besides destroying the Klingon ship. K'Ehleyr smashes a table in anger, Troi arrives and suggests she work her feelings out in the holodeck.
K'Ehleyr uses Worf's "calisthenics" programme. Worf is angry on the bridge, so Picard orders him to go away and relax. Worf sees K'Ehleyr is using his programme, with a jungle setting and monstrous opponents. He joins her in the fighting, then it gets sexual. There's sniffing and bleeding and I'm guessing it's erotic based on the camera angles. There's a scene break, so we have to use our imaginations on what came next.
Afterwards they talk about their relationship and Worf tries to get her to swear a marriage oath, as Klingons do after mating. K'Ehleyr refuses to become his wife and is angry that he tried it. Worf is angry that she will not take the oath as it means she is rejecting the Klingon way and saying that what they did had no meaning. 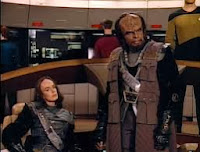 Worf brings Data to his next work session with K'Ehleyr, though they continue to discuss their relationship rather than working. Worf's honor is offended by her refusal, and she is offended that he would blindly follow honor for honor's sake rather than consider their lives and careers and feelings. Some work must get done as K'Ehleyr presents their conclusions to the senior staff. If they get to the Klingon ship before the crew wakes they can keep them in stasis. If the crew wakes they'll have to destroy them. A ship is detected. It's the old Klingon ship, which shoots at them meaning the crew is awake. K'Ehleyr says they should let the Klingons die in battle at least, but Worf has another option.
The Enterprise hails the Klingon ship, Worf is in the Captain's chair with K'Ehleyr next to him, both in traditional Klingon outfits. He tells the Klingon Captain that he has committed treason by firing on them. Worf says the war is over. He orders the Klingon ship be surrendered to him and it only takes a brief display of force for that to happen. K'Ehleyr is sent over to wait with them until a modern Klingon ship arrives to sort things out. As she leaves K'Ehleyr says the old Klingons will be assimilated into the current century. She admits to Worf that she was tempted to take the oath but was scared by the strength of her feelings. 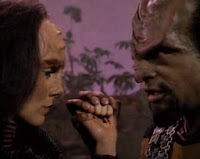 It's Klingons, so it's about honor, cos that's their thing. We learn that Klingons don't (or aren't supposed to) mate without immediately swearing an oath of marriage. It kinda fits with the honor thing I suppose, but seems odd compared to other common Klingon behaviours. Does this mean that Worf and K'Ehleyr are virgins? Or does it only count with Klingons, so sex with other species is fine? It would explain why Worf got freaked out by the growling Klingon lady that Riker tried to give him that time he was magic. Riker was offering something purely carnal, but Worf's principles wouldn't allow for that. It's clear that this is the first time they've mated, and though it seems odd (especially as they were presumably happy before, but are arguing now) apparently Worf's attempt at post-coital marriage is the Klingon norm. This explains why he gets offended at her refusal, but if that is the system surely you shouldn't have sex with someone without finding out if they want to marry you first? Or does 'honor' state that regardless of their feelings they must marry because they had sex? 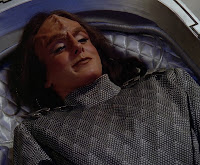 Watching this soon after Manhunt I felt an uneasy sense that I was seeing another episode in which the subtext criticises a woman for having sexual desire. Re-examining it that doesn't seem to be the case, it has more to do with tradition than gender. K'Ehleyr is half-human and Worf was raised by humans, so it makes sense that their views might be outside the Klingon norm, perhaps that explains what drew them together in the first place. However, despite his upbringing, Worf tries to stick rigidly to Klingon tradition, which is how his identity works. K'Ehleyr sees the inconvenience of tradition and is angered by the expectations he places on her. As she's mixed-species there's no reason why Worf should necessarily expect Klingon social customs to mean more to her than human ones, especially as she's wary of her Klingon side. At this point in the series Worf is held up as the Klingon example, even though it's already clear that he's quite odd for a Klingon, and has some serious identity issues. I guess if he were to embrace the more human parts of himself then he and K'Ehleyr could have a chance. As it is she was tempted because she cares for him, but knows that she wants to do other things, or possibly she has a fear of commitment.
During the first scene Worf claims that Klingons don't bluff, which is a good notion to spread if you're a Klingon playing poker. Of course his solution to the episode is all bluff.

It has recently occurred to me, in the wake of certain events and after reading online accounts, that Worf (and Klingons more generally) are portrayed in a way that is perhaps reflective of the way some white people view people of colour, especially black men. Now this could just be me over thinking things, influenced by the fact that Worf is played by a black man. Though the attitude that Klingons are other, and that they are not only different but volatile and inherently dangerous, seems horribly fitting with some racist viewpoints. I don't know, just a thought.

K'Ehleyr and Troi discuss their backgrounds. Klingon-human children are clearly rare enough that Troi didn't know they existed. K'Ehleyr says she felt trapped between two cultures and thinks she got the worst of each. Her human mother's sense of humor got her in trouble and she actively restrains her Klingon side, apparently ashamed of it. Troi on the other hand never felt trapped by her mixed parentage and seems comfortable with both of her parents' worlds. Troi tries to reassure K'Ehleyr about her Klingon nature and the strength it gives her, but K'Ehleyr is determined to see only the monstrous and terrifying part of it. I have to wonder which community K'Ehleyr was raised in and whether her parents' relationship was a happy one.
Troi and K'Ehleyr are talking about themselves, so this scene passes the Bechdel test. I haven't been focusing on that while doing these posts, although the Girl Talk category shows that female-only conversations are unusual enough to comment on.
I like that later K'Ehleyr is mocking of Troi's "finely-honed Betazoid sense", I also like that Troi is entirely unconcerned by this willingly takes part in the joke.

Staff Meetings: 2
1. Riker introduces Special Federation Emissary K'Ehleyr to Picard, who introduces the senior staff to her. She and Worf are already acquainted, he is extra grumpy. K'Ehleyr explains that a Klingon ship set out over 75 years ago during the Klingon-Federation war, and the Klingon High Command have received a message saying it is returning and it's crew will soon be revived from cryo-sleep. The Enterprise is two days ahead of the closest Klingon ship and no one wants the awakened Klingons left to their own devices as there are defenceless Federation colonies nearby. K'Ehleyr believes they will have to destroy the ship because Klingons are killers and won't be convinced by humans. Picard disagrees, assigns Worf to work with her on other options. Worf quietly tries to refuse the assignment, but Picard won't let him as his reasons are personal not professional. While I can see the point Picard is making, it does seem like bad people-management if Worf is concerned enough about the situation to mention it.

2. K'Ehleyr presents the options she and Worf came up with between arguments. If the Enterprse reaches the old Klingon ship before the crew awakes they can extend the cryo-sleep until the modern Klingon ship arrives to take over. K'Ehleyr says that if the crew have already woken they will attack the first Federation target they encounter, she does not believe they will behave reasonably. Picard asks about disabling the ship rather than destroying it. K'Ehleyr points out that if they do that the Klingons will destroy their own ship, Worf agrees that Klingons don't surrender. Picard doesn't want to accept that this is the situation. The meeting is interrupted by the appearance of the Klingon ship.


The End
K'Ehleyr is going to take charge of the old Klingon ship. She's angry that Worf will let her go again without resolving anything between them. She admits that their mating had meaning for her and she considered taking the oath, but she was scared by the strength of her feelings. Worf admits he felt the same way. She's glad it wasn't just a point of honour for him and suggests that if they meet again she might stay. Worf says he will not be complete without her.
It's a meaningful ending without attempts to be lighthearted using cheesy jokes. 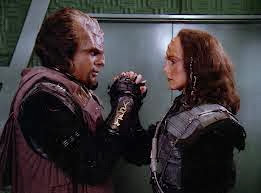 I'm guessing K'Ehleyr is the mother of Worf's son, since I can't figure out where Alexander fits into things otherwise. Given K'Ehleyr clearly didn't want a commitment I'm surprised she didn't take some kind of contraceptive precaution.
Posted by Catherine Hill at 15:22