A visitor to the Enterprise doesn't create a security breach and Wesley contributes to, but is not responsible for, saving the day.

The Enterprise is doing a wargame exercise, to be devised and monitored by a guy whose species have a reputation for brilliant strategies. Picard will have the Enterprise and Riker be given an old ship. Strategy Guy is arrogant, which is the way of his people. Riker challenges Strategy Guy to some game that Strategy Guy is a Grand Master of, Riker knows he won't win but it's an honour to play this guy. Pulaski, who doesn't like the visitor's attitude, says Data should play because of his computer brain. The game looks like 3D Pong and only lasts a few seconds, Riker loses and everyone is disappointed because they were hoping for some entertainment.
Riker and his team (including Geordi, Worf and Wesley) go to the old ship, the engine is damaged so warp will be impossible. Riker gives Wes the option of returning to the Enterprise, but the acting-ensign says he'll stay. Riker asks Strategy Guy why it's a mismatch, but it turns out that's part of the exercise. Strategy Guy doesn't think much of Riker from what he's read in his file. Wesley retrieves a "project" he's meant to be working on from the Enterprise, which he beams to Geordi. Pulaski tries to get Strategy Guy and Data to play the game, Data agrees because Pulaski wants it. Data loses, but is much closer than Riker was. Pulaski doesn't understand, she thought Data was meant to be infallible. Troi visits Data, who takes himself off Bridge duty because he believes he is faulty. Se isn't able to convince him that it's OK to make mistakes.
Riker catches Wesley and Geordi plugging Wesley's experiment into the old ship. Riker claims it's cheating, but Wesley points out that Riker told him to improvise. Pulaski visits Data and accuses him of sulking. She's sorry she got him to do it and feels guilty about how its affected him. Pulaski and Troi tell Picard about Data's lack of confidence and say only the Captain can help. Picard thinks they're fussing but orders Data back to the Bridge. Data tries to figure out how Riker will approach the wargame. 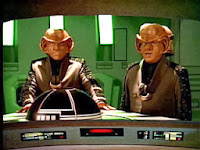 The game begins with Picard using an obvious manoeuver, Worf surprises the Enterprise with a fake Romulan warbird allowing the old ship to attack. Geordi says the old ship can try going to warp, but there's no guarantee it will work. A real Ferengi ship appears, Strategy Guy insists the Enterprise abandons the old ship to save the greater numbers, Picard refuses and speaks to the Ferengi. They want to know why the Federation ships are acting oddly, they assume the old ship has something valuable onboard and trap them. The Federation crews concoct a plan. The Enterprise makes it look like they've blown up the old ship and Worf scares the Ferengi off with another illusion. Strategy Guy sheepishly admits he underestimated Riker.
Data plays Strategy Guy again, stays calm while the Grand Master panics and eventually suspends the game. Data altered his parameters for playing the game and played to draw, not win, thus confounding his opponent.


Guest Star
It's Armin Shimmerman as a Ferengi, again. I guess Quark's cousins really get everywhere.

Oh Captain, My Captain
Picard resisted wargames at first because he believes Starfleet is not a military organisation and is for exploration. However in the face of the Borg threat he decided it would be good to hone tactical skills that might be needed in a crisis.
When Strategy Guy expresses his low opinion of Riker Picard takes him into his ready room and demands to know what his problem is. Strategy Guy studied Riker's file and thinks he isn't up to the job, he's too jovial for a start. Picard warns him against underestimating Riker, who is the finest first officer he's had. Picard also points out that his joviality fosters loyalty among the crew.
Picard is confused when Troi and Pulaski ask him to help restore Data's confidence, he doesn't think Data is capable of the emotion, and Pulaski says it's probably programming but the effect is the same. Though the game starts soon Picard grudgingly agrees to help and orders Data to figure out how to beat Riker.
Picard tries to talk to the Ferengi, to try and resolve things peacefully. Picard is unwilling to leave the 40 crew members stranded on the old ship, though it puts the Enterprise in danger and Strategy Guy tells him there are no other options. He gets the crew to come up with other options which is similar to his approach in the previous episode. 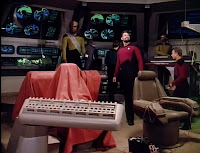 Though Strategy Guy is dismissive of him its clear that the rest of the crew are behind Riker. They cheer him on when playing the strategy game he can't win. Picard more or less says that Riker gets on better with the crew than he does. When Picard asks Data how to win Data lists some of Riker's previous battle successes and explains that Riker rarely relies on traditional tactics and uses cunning. It's also true that Riker will be more aggressive the weaker his position because he doesn't give up.
Riker tells Picard to leave him and his skeleton crew in order to save the Enterprise from the Ferengi. He agrees to Data's very risky plan in the hopes that it will save all of them, being cunning and risky its right up his street.

Does Not Compute
Data is persuaded by Pulaski to play Strategy Guy at the game, although Data feels no need to prove himself he wants to please Pulaski. He is shocked when he doesn't win, having been convinced by Pulaski that he will -though he probably didn't realise that was what happened. He stays in his quarters testing himself, convinced he is faulty. Troi tries to discuss ego and making mistakes with him and Pulaski accuses him of sulking and apologises for putting him in that position. Data claims he doesn't have ego, but why else would he be disappointed? Data's confidence restored by Picard ordering him to leave self doubt behind, because everyone else manages to operate in the knowledge that they'll make mistakes. Data's plan saves everyone and at the end he realsies he took the wrong tack in trying to beat Strategy Guy and successfully replays him.

Doctor, Doctor
It's no surprise Pulaski wants to see Strategy Guy taken down a peg or two, he is an arse. Though its rather unfair of her to basically trick Data into playing when Data has no desire to do so. I think she still doesn't see Data as a person for the most part and she just assumes Data will win as she wouldn't with anyone else. At least later she realises that her complete confidence in Data is what makes it so hard for him when he loses, and she apologises for that. I really like that that she compares Data to "Achilles sulking in his tent", because it's nice to have an Ancient Greek reference every now and then. Pulaski is the one who gets Picard to help Data, and though she fully believes Data is sulking she still isn't sure if his reactions are emotions or programming. I guess that's the puzzle with Data, and even he doesn't seem to know. She does seem more perceptive than Troi in this case, but I'm never sure if Troi can actually sense anything from Data, even if he is experiencing emotions.

Worf is not impressed by Strategy Guy, his people are renowned for their tactics, not prowess as warriors. Worf also doesn't see the point of the wargame as there are no stakes. Worf is the one who creates a fake Romulan ship to distract the Enterprise, and later a fake Federation ship to scare the Ferengi (though I'm not sure how he does the latter as it's his familiarity with the Enterprise security tht allows him to do the former). Surely this kind of distracting tactic is not honourable? I mean Klingons are more about hitting stuff than using guile. Maybe it's fine if it's not a real battle, or if you're facing Ferengi?

Wesley
Riker recruits Wesley for his team, for education observation. Wesley is certain they don't have a prayer based on the condition of the old ship, but Riker tells him they're meant to improvise. Wesley hatches a plan and gets back on the Enterprise, using his status as a kid who has homework, to get sneak away a gadget he made. It allows the old ship the possibility of a brief period of warp. This turns out to be vital later when dealing with the Ferengi. It means that in a way Wesley helps save the day, but so do Worf and Geordi and Riker and Picard, and especially Data. It's a team effort and Wesley's involvement is low key way with no smugness or particular acknowledgement. An improvement on some of the earlier plotlines with Wesley smugly swooping in and besting all the adults. 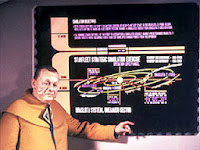 1. In the observation lounge Strategy Guy explains how the wargame will work. Riker will have 48 hours to ready the old ship then the Enterprise's weapons will be taken offline and battle conditions will be simulated by modified lasers that count the scores (it's laser tag - in SPACE!). It was at this point (just after the credits) that I was certain real danger would show up during the game, it's how these things work.
2. Pulaski and Troi go to Picard's ready room and insist he help Data get over his profound loss of confidence. Picard doesn't take it as seriously as them, but goes to Data all the same.
3. Data reports on Riker and his likely tactics in the observation lounge. His conclusions take into account Riker's previous record. Troi stops Data from over-analysing and guides him through assessing Riker's character as a fighter, espeically against poor odds. Data asks if that's a human flaw, and Troi says he must dcide that for himself.
4. Discussion takes place on comms between the observation lounge on the Enterprise and the Bridge of the old ship. Picard asks for options, Data explains his plan to make it look like the Enterprise destroys the old ship, allowing it to escape without the Ferengi looking for it.

Security Breach
Not even Worf suggests that maybe it's a bad idea to disable all the weapons. Obviously for the purpose of the wargame they can't really shoot at each other, but if it's that important to the Federation surely a guard ship could be sent. Or else hold the thing in a secure/quiet part of Federation space, not somewhere hostile forces can rock up at any time.

The End
Data plays Strategy Guy again, the scores get higher and it goes on longer until eventually Strategy Guy suspends the game petulantly because he can't win. Data reveals to his friends that he was playing to draw, that way Strategy Guy misjudged his intentions and Data could play for balance rather then victory. Data could have played him indefinitely and though he technically didn't win everyone thinks he's victorious. It's all jolly. 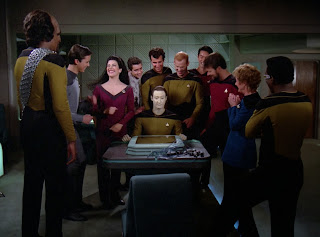