My thoughts on series 1 from the beginning of the year. 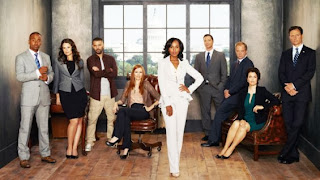 Scandal definitely got more interesting in series 2 and it some of the things that had previously annoyed me were gone (namely British lawyer) or reduced (the filming-through glass).

The Problem of the Week plots were mostly abandoned to focus on a larger and more involved arc, which allowed the show to live up to its name and provided many twists and turns. There was also a lot more development and back story for the existing characters and new ones. The level of political intrigue was ramped up massively with more attention put on the the President, First Lady and Chief of Staff, as well as new characters who are players int he political game. The first half of the series focused on a conspiracy which started during President Grant's election campaign and saw an unlikely alliance between many main characters, including Olivia. The second part of the series jumped ahead in time, the President dealt badly with revelations, Cyrus and Mellie scheme and squabble to keep influence over Grant, and Olivia & Co get involved in a dangerous web involving the intelligence agencies and a mole hunt. 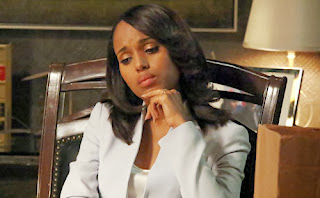 Olivia Pope continues to be the focus of the show, although she increasingly shares screen time with other characters, mostly characters connected to the White House. Olivia's strength of will and fierce intelligence are still on display, but she is clearly haunted by her part in a conspiracy. She is often shown to be vulnerable emotionally, especially when it comes to her complex love life and relationship with President Grant.

Quinn did get much more interesting, her Secret Past turned out to be mysterious even to her. She used to be Lindsay, was framed for a bombing in which her boyfriend was killed and was spirited to Washington where she work up with a new identity. Her odd situation turns out to be part of a greater conspiracy and Olivia & Co must save her from prison and execution at the start of the series. After surviving the ordeal of her trial and discovering the truth, Quinn becomes interested in the covert world of intelligence and is Huck's unofficial apprentice. Her enthusiasm makes her more interesting although her newly learned skills take her to a dark place.

Huck's back story is revealed, he's not only ex-military but also a former Government assassin. His dangerous world encroaches on the story and his former colleagues, mentor and employers often appear. At one point Huck is captured and tortured and though he tries to shake off his old life his skills are often needed and he is never far away from breaking. 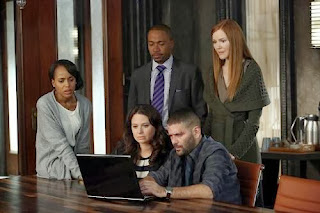 President Fitzgerald Grant and his First Lady Mellie are a much bigger part of this series and their troubled relationship had me uncertain who I felt sorry for. Mellie is a ruthless political animal who will do just about anything to get where she wants to be and I'm fairly certain Fitz didn't run for President so much as he was pushed. For all her scheming Fitz is little better, I honestly don't think he deserves to be President and he seems kinda weak-willed. The main times he shows any backbone is when making poor decisions. This is not a TV president I admire, and yet (like so many people in this show) my lack of respect or affection doesn't stop me from being interested.

Cyrus Bean -the gay, Republican, Chief of Staff- is part of various conspiracies and shows himself to be at least as ruthless as Mellie, and there are times when the two horrors are scheming against each other for Fitz's trust. Cyrus's husband James features more and in his role as a journalist he almost exposes what Cyrus did. I feel that Cyrus doesn't deserve James as a husband, especially as he seems positively irritated by anything resembling family life and has no problem manipulating him anyway he can.

Abbie ends up having a relationship with former DA David, whose life and career are ruined by Olivia & Co after he unsuccessfully prosecutes Quinn and tries to expose a conspiracy. For a while he and Abbie seem happy, but David blames Olivia for ruining his life. When he's in danger he turns to Olivia and her firm for help and seems to become part of the team, but there has been a lot of bad blood between them.

Harrison comes into his own more (I remembered his name this series) although he has little development or back story. He acts as Olivia's deputy and is probably the most brainwashed of the group (by Olivia - though Huck was actually brainwashed by his former bosses at one point). Harrison is incredibly invested in the idea of Olivia & Co being the good guys, the 'white hats' and gladiators. There is a constant misunderstanding of the meaning of the word gladiator. 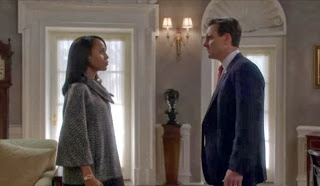 Watching Scandal can be an odd experience because I don't feel affection for most of the characters, by and large they're horrible people who often make bad decisions. David, James and Huck are the only characters I feel sorry for without reservations, and Huck has done enough terrible things that it's hard to justify calling him a good person. And yet it is fascinating, the engrossing plot arc and increased pace have really paid off. There have been episode that felt twice as long because so much happened in them and the complexities of the characters work really well.
I read an article recently that described Scandal as a dark, perverted mirror of the West Wing, which I can understand. I enjoy Scandal but in a totally different way because tonally its an entirely different show. I don't generally think of West Wing when watching, which is probably to Scandal's benefit. President Grant's series finale announcement about whether he's running for a second term or not is a major plot point, but I simply cannot care about it as much as when President Bartlett did it. Plus the dramatic impact and soundtrack are nowhere near as cool. Having said that, the last minute reveal at the end of series 2 means I'm definitely looking forward to series 3.
Posted by Catherine Hill at 21:56