Riker gets in touch with his inner goddess whilst suffering from futuristic, empathic gangrene in this clip show that finishes the second series.

What Happens
In a swamp Geordi sees Riker wounded by something that jabbed him in the leg. O'Brien can't beam him up because of unidentified microbes. Pulaski goes down to examine him then authorises Riker to be transported to sickbay.
Riker stays upbeat, cracking jokes even as things looks bad. The microbes move up his body and if they reaches his brain he'll die. Picard orders Data and Geordi to get a sample of whatever stung Riker so Pulaski can examine it. Turns out it was a carnivorous vine that immobilies its prey. Unfortunately the sample doesn't tell Pulaski much. Riker continues to be upbeat and tells Troi that even when facing death he's setting an example. Riker passes out as Troi holds his hands, the illness has gotten to his spinal cord, it will reach his brain within an hour. Pulaski sticks spikes into Riker's brain and Troi stays with him.
Pulaski's brain spikes are stimulating neural activity and Troi can sense what Riker is feeling.
Troi says Riker has relaxed and Pulaski says that reliving memories is a side-effect. The microbe is reacting to his mood, so Pulaski changes frequency to see what happens.
Troi senses passionate, erotic emotions as Riker's memories of Minuet continue.
Pulaski notices growth rate of organism has doubled. Troi says they've made it worse. Pulaski reckons its something to do with endorphines, she changes frequencies again.
Pulaski notices the growth has slowed and Troi senses he's sad. Negative emotions stop the growth. Pulaski and Troi need to isolate strong negative emotion memories, but the treatment could be bad for Riker
These memories are about fighting, because of course Rik is fighting the illness. Do you see, do you?
Troi senses his primal, survival instincts. Troi insists Pulaski does more, the doctor is wary because he's so weak, but there's little choice.
Pulaski is desperate and tightens the pattern further at Troi's suggstion.
A montage of violent memories:
Junkie attacks, Admiral shoots, Auto destruct, Data fixes, Tar creature grabs, Klingon fights, Auto destruct, Assassin killed, Fighting Klingon, Ship explodes, Ship destroyed, Brain louse queen explodes, Ship explodes

Riker's vitals improve and Pulaski confirms the infection is eradicated.
Riker wakes (with puncture scars on his head) and talks to Troi. Pulaski delivers the good news, but has to run lots of tests and warns of possible memory loss.

Riker's bravery and good humour in the face of death is amazing and it's no surprise that Picard and Troi are impressed. Riker's talk about setting an example and showing good character in this ultimate test is admirable. Having said that the lack of negative emotion gave me pause, surely Riker feels sad or sacred or angry or something? He's gotten worked up and displayed negative personality treats over less, then again perhaps his impending death gave him clarity.
I wholeheartedly agree with Riker's surprise that this kind of thing doesn't happen more often. "After all, we are exploring the unknown." Space is really dangerous and lots of bad stuff goes down there. (Actually that sentence kinda sums up most space-based SF.) 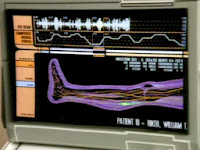 Pulaski is obviously called to assess the Riker situation. O'Brien offers to override the transporter and beam Riker aboard anyway but Pulaski says she'll go down and check on him. Her respect quarantine regs makes me strangely happy (I saw Prometheus for the first time a few months ago and had to be shushed for going on about quarantine - but the lack of sense was maddening to me.) It's also cool that Pulaski beams down herself considering her fear of transporters.
Pulaski tells the Captain that whatever is inside Riker can't be removed without destroying Riker's nerves. It's moving through his body pretty quickly, amputation time surely? It seems the obvious solution. I mean its the 24th century, they must have good prosthetic limbs and losing a leg is surely better than losing his life.

Counsellor Pointless
Troi is given useful stuff to do this episode, which is good. Stuff that is relevant to her skills, her actual job and her relationship with Riker.


The End
Just as Riker is warned of possible memory loss Data and Picard come in. Riker pretends he thinks he is Picard. Picard pretends Data is an admiral. Data takes the joke literally and tells Picard he isn't able to promote him to Admiral. All is jolly once more.

Some might say that it's an odd choice to end a series of an ensemble show on a clip-filled episode that focuses almost entirely on one character, but clearly those people did not get what was going on here.

So series 2 was a slight, if still uneven, improvement on series 1. I'm told it gets better from series 3 (though I recall people saying that about series 2). To finish I'd just like to mention Scroll Down to Riker. 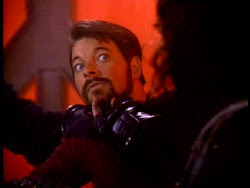