The Ensigns of Command

Picard must understand and apply a complex treaty without Data's help. Data must persuade some people to do something they don't want to do without Picard's help.
There is no one of the rank of Ensign featured in the episode and Wesley only gets one line, so that's not what the title is about. 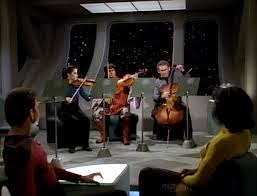 Data is playing a string instrument concert with O'Brien, a Vulcan and a blueshirt. Data tells Picard and Dr Crusher to come back when someone else is playing because he's been told his playing lacks soul. Picard explains the downside of excessive honesty, and is called away by a message. The Shelliac aliens (who probably don't have anything to do with nail polish) notify Picard that there are humans on a planet that belongs to them. The Federation have 3 days to remove the humans as per a treaty, after that the aliens will destroy the human vermin. The planet has fatal radiation that interferes with scanners, transporters and weapons. Dr Crusher reckons that the humans must have adapted to the radiation (adapting to radiation you can't survive is a neat trick). Data is sent to start the evacuation as he's the only one who can survive there (it seems the radiation also affects Klingons, Vulcans and any other non-human races on the Enterprise). 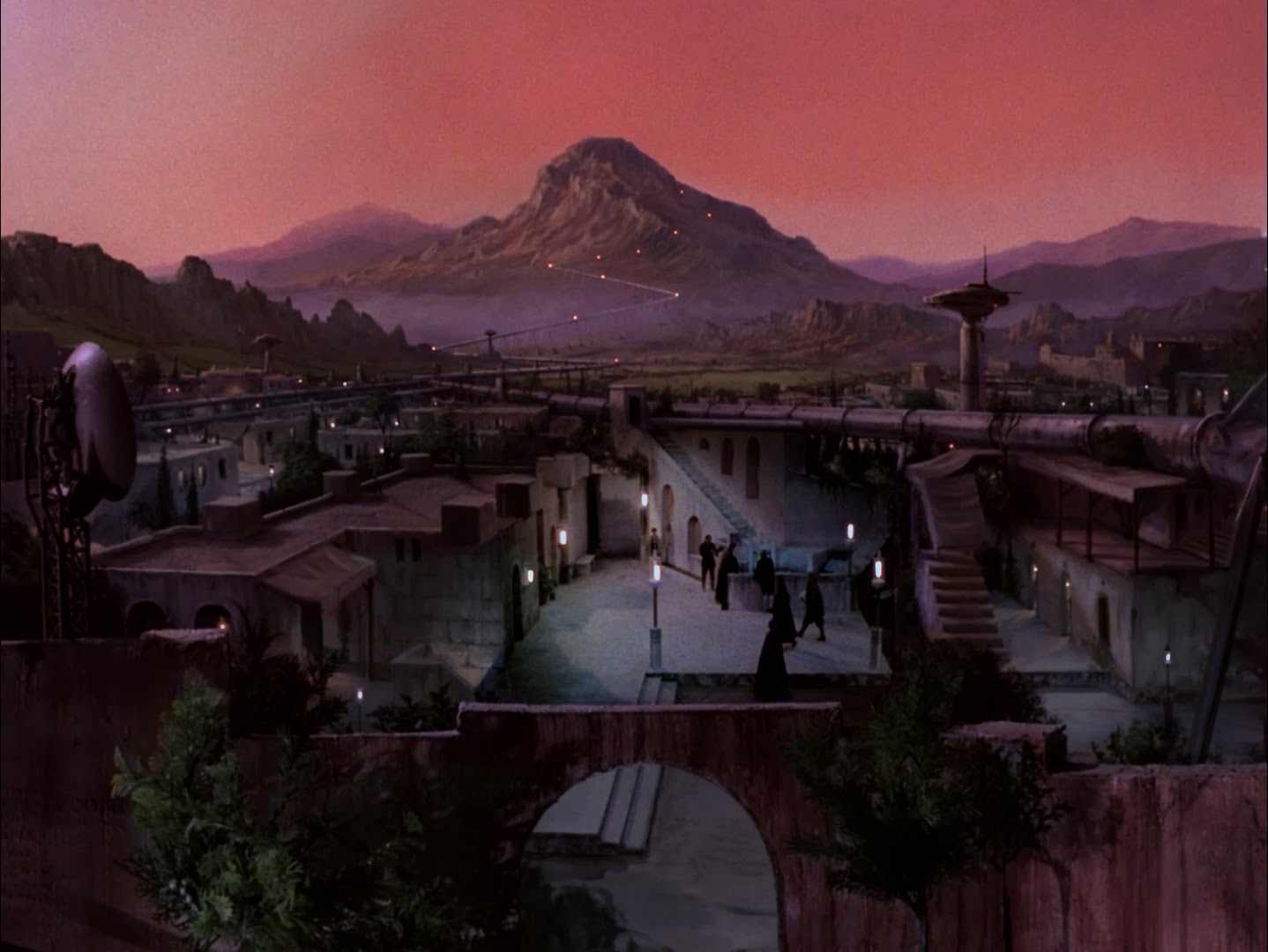 Data's arrival surprises 2 talkative men with capes. Their ancestors settled there 92 years ago after their Federation ship got lost, it took a lot of work to survive the radiation and create a settlement. There are now 15,253 people, it's impossible to evacuate that many by shuttle in 3 days. Data is taken to their leader, who seems mildly surprised to see an android and refuses to believe anything Data says and won't evacuate. A lady helps Data, she is very interested in him and asks a lot of technical questions, despite never seeing an android before. Further attempts to explain the situation to the leader result in denial and the leader going on about the history of the settlement. Data tries talking to people individually, most don't believe him, or think they can fight or negotiate. Data tries asking Picard and Riker for guidance, but they are having no better luck. Data goes to a public meeting where the leader successfully uses rhetoric and inflated civic pride against facts, even though Data tries to appeal to them emotionally and even mentions dying children. Some colonists are mildly concerned about their impending deaths and meet with Data separately.
Riker insists that Geordi and O'Brien make the transporters work, they try even though it's impossible. It will take Star Fleet 3 weeks to send a fully equipped colony ship. Picard tries to negotiate for more time with the aliens, who stick to the treaty and refuse to hear any argument outside it. They will arrive in 3 days, kill any humans they find and colonise, as is their right. Picard and Troi look at the big, complex treaty and Troi explains why a basic concept of Star Trek is deeply improbable. Picard takes the Enterprise to intercept the aliens, who let Picard beam over, but still won't listen to him.
Data holds a meeting in the lady's house where some people hear Data out and think that maybe they should evacuate, but only if the leader can be convinced. The leader arrives, tells everyone off and attacks Data, which he sees as turning off a machine rather than an act of violence. This means that the evacuation is off, for some reason. The lady somehow reactivates Data and he realises that actions speak louder than words. He makes a phaser from household items (don't try that at home), stuns a group of guards then destroys the town's vaunted aqueduct. He explains that the aliens are numerous with stronger weapons and will probably kill them all from orbit (it is the only way to be sure), so they won't have a chance to fight. This makes the colonists understand and even the leader agrees they should prepare to evacuate, though he wanted to die for the settlement.
Picard decides to really look at the treaty, gets the senior staff to read it, then finds a section about 3rd party adjudication. He tells the aliens that he'll get a hibernating race to adjudicate when they wake in 6 months, or they can give him the three weeks he's asking for. The aliens aren't happy but they agree. Geordi and O'Brien say they can get the transporters working if they have 15 years and a +100 research team. The evacuation plan goes well and the lady says goodbye to Data. She wants some emotional connection from him, but Data claims he doesn't have emotions. The message of the scene is that Data is purely rational. 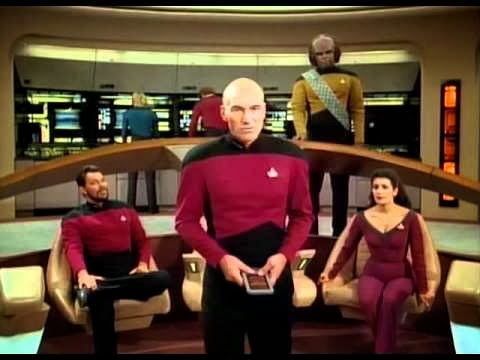 Picard advises Data that excessive honesty is bad, especially in a command position, as advertising your flaws stops your crew from having confidence in you. Plus you'll start to believe in your limitations.
Picard tries to deal with the aliens' demand and adherence to the treaty. His attempt to speech at them fails because they rudely hang up. Although he refers to the treaty it takes him a while to actually look for a solution somewhere in there. It's a complex document that was made over a century ago by +300 legal experts, even so it seems a bit odd that he and Troi were apparently skim-reading it before. It's also odd that there are no lawyers on the Enterprise. I'd have thought there should be trained lawyers, or at least someone with a law degree, I mean they have (or possibly had) a fiction expert... on the spaceship.
When Picard takes the time to properly look at the treaty with the senior staff (not even a paralegal to help out) he discovers the loophole. A 3rd party can be brought in to adjudicate and he chooses a race currently in hibernation for another 6 months. He gives the aliens the options, then he hangs up on them with great satisfaction.

Riker: lover, adventurer, middle-management
In a moment of bonding Riker ad Picard finish each others sentences while explaining (apparently to each other) that the aliens will destroy all the humans and they'd be entitled to do so. And thus the stakes are explained.
In this episode Riker plays the role of that manager who tells you to do something difficult/impossible then motivates you by repeating what he's asked you to do and assuming you'll get it done despite your objections. He kind of gives Data advice, but he doesn't help Geordi and O'Brien at all. He just wanders in on them modifying the transporters and gets on their backs about it.

Does Not Compute
Data has trouble understanding why no one will listen to him and his plainly stated facts. The lady explainsthat humans have various flaws that he does not, and helps him by suggesting he try reverse psychology and emotional language. Of course Data can't play that game the way a human can, plus he's a weird-looking, non-human stranger whereas the leader is apparently respected so much that people would rather risk dying than go against his word.
Data doubts his ability to accomplish his task. The lady kisses him because he's feeling down (because that's a thing people do?) and Data entirely wrecks the moment by analysing the kiss and asking what it was about. At the end of the episode the lady suggests Data might have some fondness for her and he is perplexed by the notion, which disappoints her. He kisses her, but only because it mirrors her kissing him earlier. Apparently Data has been chemically castrated (or whatever the android equivalent is) since the Naked Now because he not only feels no affection, he entirely fails to recognise it.

Counsellor Pointless
Troi -in her secondary role as Picard's secretary- explains the circumstances surrounding the treaty and communications issues with the Shellac aliens, who cannot be read telepathically or empathically. She also demonstrates to Picard why any interplanetary communication is highly improbable, even among species that have some common reference points. Yes, many different aliens being able to communicate easily with each other, even using roughly the same methods of communication, it the does seem to good to be true, doesn't it?
Troi asks Picard who they have to help with the treaty, and Picard says it's just the two of them. I dunno, it seems like he could probably find someone to help out.

Blind Engineering/Poor O'Brien
Geordi and O'Brien attempt to follow impossible orders and get the transporters working. Wes helps but even he doesn't think it can be done. Riker ad Picard wander through every so often telling them to get on with it. Wesley questions this, but Geordi says that's just what captains do. These are the things are engineers know. 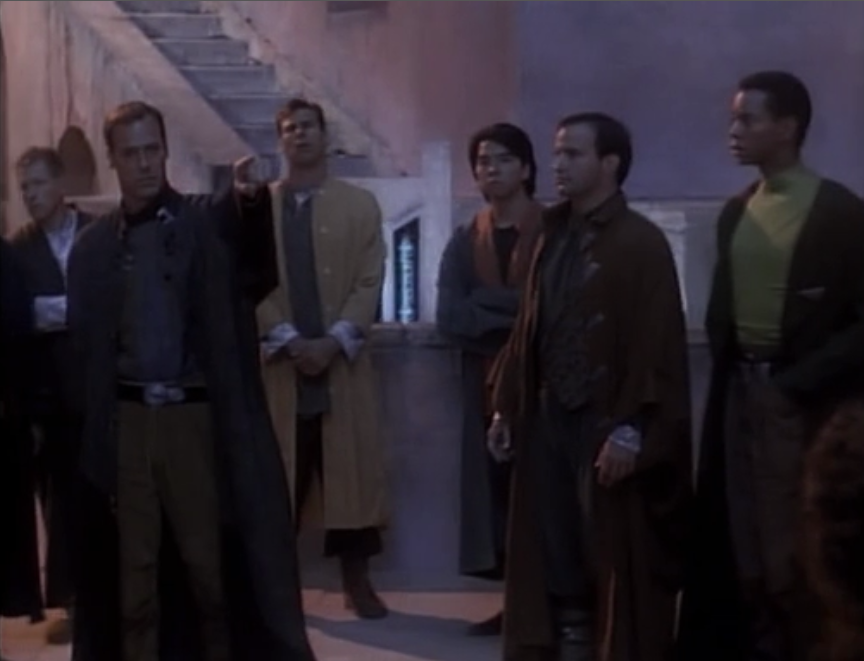 The people of the settlement may not believe Data and if they don't their actions make sense. They trust their leader enough to make that decision; though you'd think those who were present might be concerned that he has reached his decision without giving it any thought, or checking anything, or even coming up with a reason why Data would lie to them. Later its clear that some people do believe Data, or are concerned enough to hear more from him, but even then they refuse to let Data help them unless the leader agrees. At the point that you believe your leader's decision will lead to your death, why do you still care what he thinks? No one is actually willing to stand up against his word and help save the lives of their peers. When the leader turns up to the not-so-secret meeting everyone talks very calmly and meekly, and just watches as he stuns Data. Is this someone you want as a leader? Even if his grandfather was heroically crushed by rocks building an aqueduct.
It's easy to feel mild contempt for these idiotic people, but I suspect they represent us, as a whole. There's no obvious or heavy-handed parallels with current affairs, but I think this is a commentary on modern society. If you look at something like global warming, for example, you see much the same kind of behaviour from leaders and the led, but with less convictions and principles.

Today's lessons:
1. Excessive honesty is a bad thing
2. "Wanting the impossible" is the short definition of Captain
3. People will follow a leader, even against their own judgement
4. Making legal documents work for you requires reading

The End
Picard got chance to listen to Data's violin concert and says it shows feeling. Data explains, for the second time that day that he doesn't have feelings, he's just imitating other violinists. Picard counters by saying that the musicians he's imitating are entirely different, yet he blends them. Data concedes that he has learned to be creative.
I feel that Data has convinced himself that he doesn't have feelings and is reluctant to accept compliments. As the first section made clear, if you believe something about yourself enough you probably make it true. Something I can identify with. 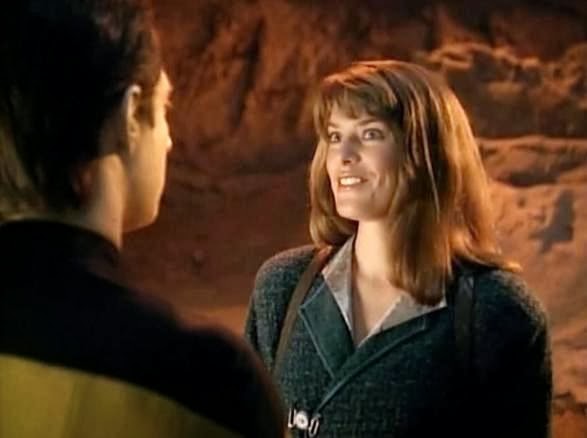