Banners in the Wind 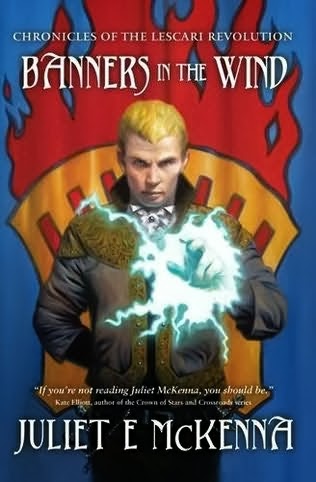 The previous volumes in this trilogy are Irons in the Fire and Blood in the Water. This review contains mild spoilers for both.

The third book in the Chronicles of the Lescari Revolution trilogy sees the fighting continue into autumn and winter after the foreign mercenaries have returned home. It is time for Lescaris to fight for themselves, to show that they are willing to fight for peaceful unity and able to control their own affairs. However old allies become targets as the ideological differences of the initial conspirators lead them into conflict. The surviving Dukes are keen to regain their titles, and one still remains safe in his dukedom.

It's fair to say that I had a few expectations about the third book in a trilogy about a revolution. There's so many ways the story could go -even within the broad expectations- and I was interested to see how the Lescari revolution would conclude and what shape a new Lescar would take. It had been a while since I had read Blood in the Water, but reminders of previous events, as experienced in different ways by different characters, are seeded consistently and seamlessly into this book when needed. I wouldn't recommend reading this book without reading the previous two, because you'd be missing out on a good read by skipping them, but it is perfectly possible to read this volume alone.

I've realised this book is very much a depiction of the aftermath of previous events, and much of the plot is driven by consequences. The consequence of removing rulers is a power vacuum that others will try to fill in different ways. The consequence of law and order breaking down is that regular folk are prey to criminals. The consequence of a paid army going home is that you will have to find people willing and able to fight for their own land. The consequence of internal unrest is that neighbouring nations will want to get involved. All of these challenges are faced by the conspirators and must be answered. Much of the plot consists of characters reacting to events -a town being overrun by bandits, the new tyranny of a troublesome former ally- but this is not a criticism, far from it. Everything that happens is a result of the characters previous actions, directly or indirectly, and it would be terribly unrealistic for any character to be in control in this situation. The pace is kept up throughout as each character deals with their situation, there's action and intrigue aplenty. As with the previous volumes we get a rounded picture of what's happening as characters on different sides of the conflict deal with different types of problems.

Consequences are also important on a more personal level as most characters deal with the results of what they havealready done. Duchess Litasse bears guilt for bringing a depraved mage into her quest for revenge, and as she grows increasingly uneasy about the actions being taken in her name she has to decide what her future will be. Tathrin faced the censure of his family for his part in the revolution, and is thrust into a leadership role he never wanted as he becomes the Captain-General and shoulders the responsibility for the new Lescari army. Aremil and Branca draw apart from each other, as each regrets the things they have done and fears the judgement of the other, but their communication via magic is essential. Even Sorgrad, whose stake in the fate of Lescar never seemed personal, has something to gain or lose as his subtly-disguised romantic feelings are revealed in a way that is wonderfully unorthodox and a testament to the author's skill.

Without going into much detail, the ending shows a way forward for Lescar and a chance at respite for the conspirators, who have had a difficult year and want to get on with their own lives in their newly-freed and unified homeland. While this is the end of this series I'm hoping that the later books set in the same world will make some reference to how things are going for the Lescari. I suppose I will have to read them to find out for sure.
Posted by Catherine Hill at 16:36