A mystery I didn't figure out by myself and powerful magic. It's, like, practically fantasy.

What Happens
The Enterprise rushes to a distress signal from a colony under attack. When the ship arrives the whole planet has been devastated, there's only one intact building and two survivors in a square bit of grass (what are the chances?). An away team meets a grumpy old man and his hospitable old wife, botanists who retired to the colony. They saw the attack and don't know why they survived it. Kevin, the old man, is keen for the Enterprise to go away and leave them alone. Rishon, the old woman, is friendlier, but even she doesn't want to leave, though their chances of continued survival are slim.
Troi hears twee music on loop in her head, the same as the music from Rishon's music box. It bothers her throughout a staff meeting and she goes to her quarters, but can't escape it even in sleep. Dr Crusher tries to help, but knocking Troi out doesn't stop the torment and eventually she has to induce a coma in order to give Troi peace.

An unidentified warship turns up from nowhere and ineffectually attacks the Enterprise, before leading the Federation ship away from the system. Picard returns and visits Kevin and Rishon himself, offering them a replicator, which Kevin refuses. It turns out Kevin is a pacifist and they wouldn't fight the attackers with the rest of the colony, but that doesn't solve the mystery of their survival. The mysterious ship returns, looking different and with better weapons. This time it damages the Enterprise and forces retreat, though no one is killed. Picard orders the ship to return to the planet, at which point he beams down to see the old couple again. Kevin is surprised and angry and insists Picard leaves. The Captain tells the old couple they're in danger from the warship and that he won't enter their house again but they will stay in orbit to protect them.
When Picard returns the warship reappears, Picard orders the Enterprise to hold position and not to engage. The warship attacks the planet, destroying Kevin and Rishon as the crew look on. After the apparent destruction Picard orders the ship to stay where it is, he's clearly waiting for something. Several hours later the house reappears, as do the couple's life signs. Picard was expecting this. He has the pair beamed to the Bridge and demands an explanation from Kevin, before explaining that Rishon isn't real, she disappears. Picard tells Kevin that a member of his crew is in agony because of him. Kevin turns into energy and goes to Troi's room. Picard finds him there and Kevin says he's taken the music away from here. Kevin explains that he's an immortal being of illusion who fell in love with a human and lived as one for over 50 years. No one ever figured him out before. He refuses to kill and so did not help the colonists, or the real Rishon, in their fight against the attackers. He tried to use illusion to drive the attackers away, but that just angered them. After Rishon died Kevin went insane and wiped out the entire attacking species. Ashamed of this genocide he recreated his old life and hoped no one would ever find out what he did. 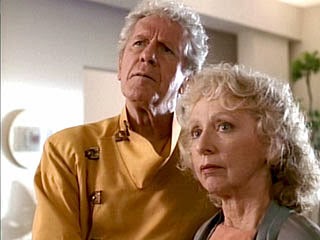 Guest Star
Rishon was definitely familiar. Turns out the actress, Anne Haney, has been in various things. I think I mainly recognise her as Mrs Zellner, the inspector from Mrs Doubtfire.


Oh Captain, My Captain
Picard figures out the mystery much quicker than usual. In fact I'm not quite sure how he figured out. I was still trying to figure out what was going on when Picard was testing his assumptions. It was refreshing that I didn't know what the answer was before most/all of the characters - and no one besides Picard had the slightest clue what was happening either. I mean obviously Troi's problems were linked to the old people, because of the music (that only Troi and the audience could hear and only the audience knows is coming from the planet). Also it's TNG the subplot always ties in to the main plot, unless either plot is about a crew member (except Data) experiencing a emotion.
What I'm now wondering is how intentional my confusion was. Did I miss a beat when Picard figures it all out? (I don't think so, it's not clear in the transcript either.) Was Picard's process of figuring it out initially fuller but got cut in scripting, filming, or editing? Was it just convenient to the story that Picard knew the answer at a certain point in episode? I suppose I'll never know for sure.

Counsellor Pointless
I feel really bad for Troi in this episode because she is tortured by a twee earworm from hell and can't do a thing about it. Of course I often feel bad for Troi because if something invasive and unpleasant is going to happen to any crew member, it is likely to be Troi. In fact this kinda stuff happens to Troi a lot when she's not even putting herself in harm's way. I guess the that's price of fuzzy, undefined mental abilities.* Speaking of which...

"It's difficult to explain. I feel there's something different about these two people. I'm sorry. I can't be clearer than that."
Troi says this kind of thing a lot when trying to be of some use as an empath. In this particular case I can understand that she's having difficulty, a magic old man is blocking her, but that isn't the case every time. It's probably her job to try and explain what she can sense, rather than going on about how hard humans are to read and how unclear everything is.
What's also common is that Troi's vague senses don't actually add anything to the plot or the mood. You mean there's something a bit odd about this already very odd situation? Well it's a good thing you mentioned that Troi. I suppose it annoys me because Troi is a good character who is so often badly used.


We Need to Talk About Kevin
Kevin's pacifism is mostly explained and explored in angry conversations with Picard. I wonder why the word pacifism itself is never used, almost as though the programme was shy of saying it? Kevin describes himself as being of "special conscience" then says he chose not to fight or kill. Picard acknowledges this as his right. The way it's explained it seems like pacifism is an odd, unusual choice. I guess for those in the heart of the Federation utopia it's not really a question, not part of their reality (just as it's not for so many of us). It's different for space-faring colonists, who might face any kind of weird danger (this is only the start of series 3 and already there's so much crazy stuff out in space).
I got a sense of disapproval from Picard when Kevin says he wouldn't kill, even to save Rishon, but that may just be because Picard is trying to goad Kevin at that point. The willingness to kill for the ones you love is often a sign of heroism in modern fiction, but when you think about it there's much that's problematic about the idea. The illusory Rishon says she wanted to fight, but stayed with Kevin, presumably that's want Kevin wanted to have happened. In actually Rishon did fight, and Kevin obviously respected her motivations enough not to stop her. It's not clear whether Kevin used his powers to save the colony before or after Rishon entered the conflict, either way his attempts to help sadly backfired. When he saw Rishon's body he went temporarily insane, and was able to commit genocide way too easily. Whatever your views on pacifism in general, it can only be a good thing that something so powerful avoids causing harm.
I liked that despite being a mystical being Kevin looked like a very ordinary, curmudgeonly old man.

No Magic Here
Kevin is an incredibly powerful being. He's been around millennia and can create illusions with substance. (Begging the question as to whether they actually are illusions, and what makes something an illusion? Perhaps I'm getting a bit metaphysical.) He can also destroy an entire species with a thought and blocks Troi's empathy with musical white noise. I'd assumed he might be a Q who left to live a quiet life, but apparently there are different types of ridiculously powerful, magical beings in the galaxy. It all seems pretty fantastical to me.
Kevin's power seems a little variable. He doesn't know when the Enterprise returns to the planet until Picard goes to him, even though he's blocking Troi and must be aware of what's happening in orbit.

Staff Meetings: 1
1. In the lounge the senior staff discuss the mystery of the survivors. Why those two people? What's different about them? Did they collaborate? Do the attackers need something from them? How long can they survive alone? Troi is plagued by an unfamiliar tune, which makes the staff meeting hard to focus on.

Death by Space Misadventure
11,000 colonists died in the unexpected attack on the planet.
50,000,000,000 aggressive aliens, an entire species, were wiped out in Kevin's reaction to his wife's death.

The End
Picard points out that he can't judge Kevin, no one has the means to do that. (Apparently Picard has learned a lesson about the perils of trying to judge powerful beings, let's see if that holds next time he meets Q.) Picard tells Kevin to rejoin the illusory Rishon on the planet. In his log Picard is uncertain whether Kevin should be praised or condemned, but the Captain is certain that he should be left alone. It's one of the more sensible things Picard has said.

* Or maybe it's what happens when you're a main female character?? Troi and Crusher are both healers, not fighters or adventurers. They play a more passive, supportive role when faced with danger (as opposed to Tasha, who was a fighter), so danger is something that unexpectedly happens to them, rather than arising as a consequence of their actions. I don't know, but seems like perhaps their gender makes them more innocent/sympathetic victims.
Posted by Catherine Hill at 18:36