Riker doesn't (quite) get the girl and Picard plans to stop space raiders using civilisation.

What Happens
An away team beams down to a derelict Emerald City, which has been raided. Bloodstains at the scene belong to a race of raiders called the Gatherers, who're being a bloody nuisance. The Enterprise goes to a less-rowdy group of the same race. The Sovereign explains that they used to be a violent people, then 100 years ago they became civilised. At that point the Gatherers split from the homeworld (splitters!) and became space raiders. She says they've tried to bring them back into the fold, but the last attempt 18 years ago was rejected. Picard urges her to try again, because at that this point their problem is inconveniencing the Federation. Plus peace and unity and all that jazz. 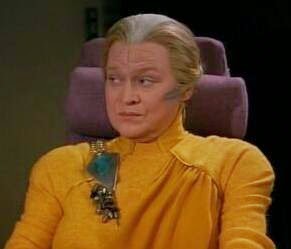 The Sovereign and her servants come on the Enterprise, including her young, blonde chef who catches Riker's eye. There's little use for a chef when they have replicators, but she says she'll make Riker a traditional meal. An away team beams down the grimy building site where the Gatherers live, they've boosted a lot of tech. Worf smells an ambush, because Gatherers have poor personal hygiene, and the away team ambushes their ambushers by cunning use of smoke and pretending to leave. Riker brings the Sovereign to speak to the leader of this group, which looks like every stereotypical, unwashed biker gang on US TV. Each side insults the other, so Picard has to play teacher and make them sit down and play nice. The Gatherer leader will negotiate but doesn't want to appear weak so he sends his men away. The Chef quietly approaches an old Gatherer and kills him with a touch, it's a clan thing. The old man's body is found and Crusher pronounces a heart attack, but isn't convinced. The Gatherer leader agrees to take the Sovereign and the Enterprise to a higher Gatherer authority to negotiate peace.
The Sovereign reiterates to Picard their old obsession with vengeance, clan wars and escalating violence. Chef asks for leave to go make a meal for Riker. Chef brings food for Riker, Troi takes the hint and leaves. Riker is uncomfortable with her servile manner, he wants to them to be equals. She isn't used to that and isn't good at conversation. She confuses him by talking in riddles about having no freedom and being stuck on her path. Crusher calls Riker to sickbay, she's discovered the old man was killed by a tailored micro-virus that targeted his DNA, so it was murder.
Chef comes to Riker's quarters for "dessert". She offers to do anything for him, but he's put off by her submissiveness. She claims to have lost the ability to feel pleasure or passion. Riker is tender with her and they kiss, but a red alert spoils the moment and Riker is called the Bridge. A Gatherer ship is firing on them regularly, even though it's much smaller. The Gatherer ship won't respond to hails, so Picard has Worf knock out their shields. The Gatherer ship hails the Enterprise, Picard says they're there to talk. The Gatherer captain doesn't want to talk, but Picard, Sovereign and Gatherer leader beam over anyway. Gatherer Captain is suspicious that the deal will make them slaves or prisoners. The Sovereign offers land, but Gatherer Captain wants autonomy and won't agree to anything until their rights are set out.
Riker requests the medical database for the entire planet/species, and gets it sent to Crusher. Crusher's
research shows the micro-virus has killed people from the same clan as the old Gatherer. A photo from a long ago trial where someone died from the virus shows Chef in the background. They realise she's from a clan that was assumed to be entirely wiped out. Gatherer Captain is the last one of the attacking clan left.

At the negotiations Picard points out that Gatherer Captain and Sovereign are alike, neither is happy with that. Chef brings brandy and Riker beams in to knock it from Gatherer Captain's hand. Riker points a phaser at Chef and warns her not to move. She admits that she was altered to stop aging by the last of her clan and long ago set on a path of vengeance, she became Sovereign's chef to get to her enemies. Riker tries to talk her out of it, but has to shoot her and then kill her to prevent murder. The Gatherer Captain declares himself in Riker's debt. In the last scene Riker is sad and thoughtful and Picard says that the truce between the two groups is now in effect.


Oh Captain My Captain
Picard decides that peace must come to this alien species, because their renegade group is raiding and attacking Federation bases and basically being a danger to shipping. Picard uses his speeching powers (though not at full force) to convince the Sovereign that she should try for peace again. After that he refrains from speeching at the Gatherers, determined that any negotiation or settlement should be decided between the 2 groups involved. However his role as mediator seems to mostly involve stopping people from getting worked up and resorting to insults and squabbling. It looks annoying, but Picard and the negotiations are really the back story here. He refuses any escort when beaming to the Gatherer ship because he must be a mediator not an enforcer

Riker: lover, adventurer, middle-management
In this episode Riker gets to demonstrate all 3 of his roles. He leads both away teams into danger. He's
behind the smokescreen and the fake order to beam up during ambush. When the Gatherers think they've gone they drop their guard allowing the Federation team to ambush them.

I immediately assumed Riker and Chef would end up sleeping together, but the episode actually subverted my expectations. He wants to, but her submissiveness and servile nature puts him off, he tries to explain equality to her but she claims it's unfamiliar. I give Riker credit here, she offers to do anything for him but he refuses because he doesn't want one-sided sex. Even now there's this damaging idea that sex is something that is done to women, rather than something they take an active part in. Nice to see a positive message about sexuality here. I was surprised that Riker didn't actually get to sleep with her, but given what happens later it makes sense. I guess they don't want a repeat of Kirk's curse. I'm told a lot of Kirk's sexual conquests end up dead, which seems like a bad pattern.
Riker requests and is given all the medical records. He sources this data for Crusher, which makes you wonder why he has more clout than someone who used to be head of Starfleet Medical. He's (sensibly) concerned about Picard going to a hostile ship alone, and the Gatherer Captain does suggest taking him prisoner. 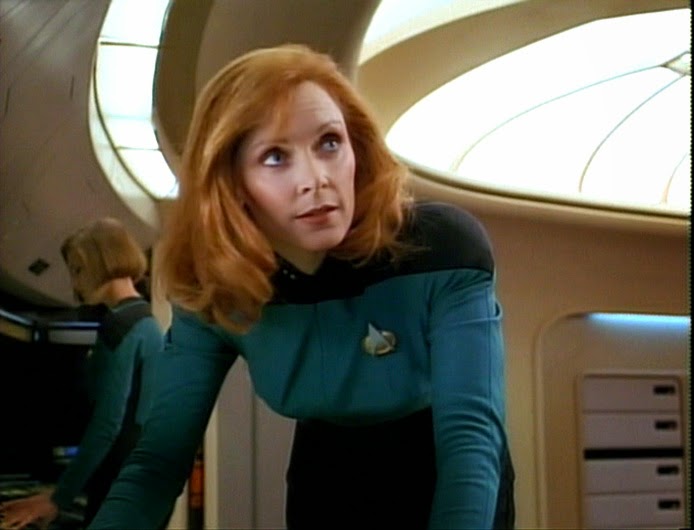 Crusher is immediately suspicious when looking at the body because although it looks like a heart attack the victim has a strong heart. She gets the medical records of an entire, non-Federation planet. None of the data is anonymised and there's even a 50 year-old photo from some guy's trial. I feel like they have a very different attitude to data and privacy than we do. How do they know the Federation won't try to sell them drugs or medical insurance?

Not-quite-an-Ensign
When the Gatherer leader come on the Enterprise he scoffs that they have a child flying their ship, which seems like a reasonable thing to be concerned about. He gives Wesley a heading that leads through an asteroid belt, Wes comes up with a safer alternative course. The Gatherer seems unimpressed by this too, but if you are going to have someone underage flying the ship it's probably good that they're cautious.
In 10 Forward the Gatherer leader interrupts Wesley's homework and says Wesley doesn't like him, but that doesn't stop them being friends. I don't get why the leader of a band of space raiders would want to be friends with a prim teen who's good at maths, I think he's bored. Wesley calls him a thief. Gatherer leader talks about survival and freedom, but says he's interested in the deal because he wants better for his children. Wes is surprised the leader has children, but it seems his eldest is Wesley's age, except he's not good at maths.


Planet of... Splitters
The Gatherers seem to have abandoned their homeworld when everyone else was civilised by whatever civilising influence they had. However the split doesn't seem to have happened down clan lines. The constant, bloody clan wars don't seem to have been carried on by Gatherers, anymore than anyone else (except Chef). I get the impression that it was a form of controlling, centralised government that brought about the change. The lack of freedom or autonomy was what drove the Gatherers into their roaming existence. Gatherer Leader talks wistfully about answering to no creature, and Gatherer Captain laughs at the idea of having land and being farmers. The way Sovereign treats Chef (and presumably the other, unnamed servants) suggests a caste system. Chef says she isn't a slave and can leave when she likes (except for her quest), but it seems that she's conditioned to be servile. It's hard to tell much more as she proves to be atypical and we never see interactions with other servants.

Death by Space Misadventure
The old Gatherer was Volnoth of the clan Lornak, killed by a targeted micro-virus that looked like a heart attack, at first.

Chef was Yuta of the clan Tralesta, last survivor of a massacre, altered to stop aging and set on a oath of vengeance she will not deviate from. Killed by Riker while trying to murder her last victim. 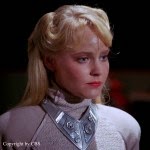 The End
Riker sits pensive at the bar in 10 Forward. Picard comes over, talks about routine matters and suggests extending shore leave on their next stop. Riker dully says he will pass the message along. I think that maybe this was meant to be a comforting moment, but I'm not entirely sure. Neither brings up the subject. Either Picard thinks that work-talk will help, or else he doesn't want to make things awkward by mentioning it. You feel as though Riker wants as little communication as possible. At the end Riker just looks sad as Picard walks away. I'm gad they didn't try to lighten the mood with a joke, this ending feels appropriate 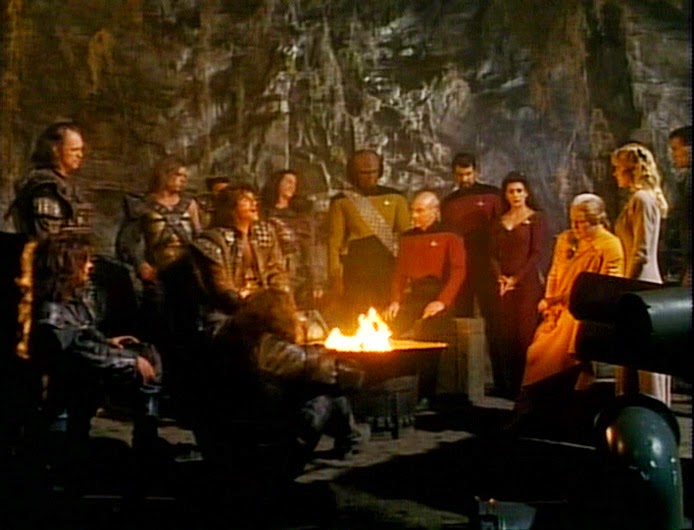