Imagine if Captain America was sent to prison. In Space! 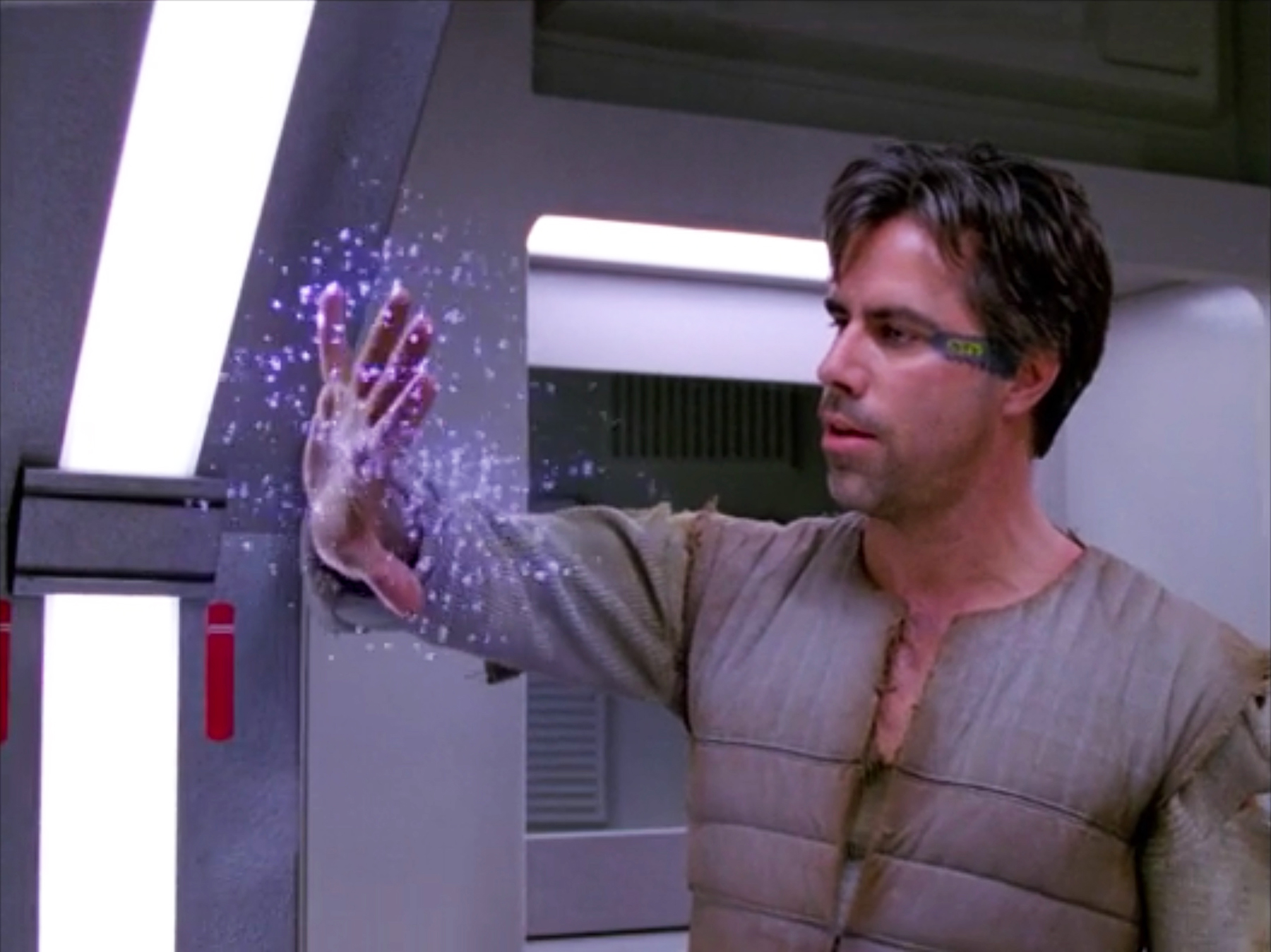 The Enterprise visits a planet applying for entry to the Federation, the society successfully rebuilt itself after a terrible war. A violent prisoner escapes from a lunar colony and the Prime Minister asks if the Enterprise will intercept him. It should be easy, but the prisoner cleverly uses an asteroid and the magnetic field around the pole to evade detection. Data figures out what he's up to and he's beamed on board from an escape pod. The fugitive viciously attacks security and Worf has to restrain him. He's taken to the highest security cell. The PM says the prisoner is incredibly violent and suggests he is sedated until they can fetch him. He is somehow able to mask his lifesigns, so sensors can't detect him. Troi senses the nightmares of the prisoner and goes to see him. They have an odd conversation and he states that he killed 3 men to escape, but Troi is convinced that despite his actions he is not really a violent man. Troi and Data check the records the planet gave them as part of their application, the prisoner has no criminal record and he was a decorated soldier.

Troi's research and conversations with the prisoner reveal that he enlisted during the war. He and other volunteers were altered to become super-soldiers. They're normal until the programming kicks in, then they will ruthlessly fight any perceived threat. When the war ended they did not fit into peaceful society and were ordered to the lunar prison and left. Data talks to the prisoner about being programmed and whether it can be reversed or changed. Picard speaks to the PM, who claims the prisoner told them half-truths and refuses to discuss the matter, saying it's internal business. Picard tells the prisoner he has no right to keep him from the authorities, and the prisoner warns that he will do whatever is necessary to escape. 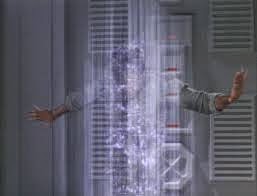 The prisoner somehow resists being transported and escapes with a phaser. He escapes and roams the ship, getting into tubes that belong to some guy called Jeffery, which are the starship equivalent of vents (he's in the vents!). He takes out security teams and causes distractions by setting phasers to explode, it looks as though he's heading for a shuttle. He seems to be trapped in a cargo bay, Picard orders gas to be pumped in. When Worf goes to retrieve him it looks as though the prisoner has stolen a space suit and gone outside. While attention is focused on the shuttle bays the prisoner, unaffected by the gas, beams away using a cargo transporter.
Prime Minister Hoggett calls to say the prisoner attacked the penal colony and released other prisoners who are now on the planet and heading to the capital. Their people are not equipped to deal with violence, that's what they programmed these soldiers for. Picard agrees to come and takes Data, Worf and Troi. Riker tells Worf that he is personally responsible for the Captain's safety. The PM is shocked by the small away team, government officials are nervously being given weapons. The away team tell the PM it's his responsibility for making the soldiers what they are, and ask if the process can be reversed, it's clear that hasn't really been tried. The soldiers burst in and surround the frightened officials. Picard tells everyone to remain calm; the soldiers are only conditioned to kill if they're threatened. The soldiers demand to go home, they refuse to be imprisoned anymore. The PM tells Picard to do something, and Picard says the only thing he can do is leave, this is internal business after all. Picard suggests that their society is likely to change rapidly in the next few minutes, and when that's settled they can reapply for Federation entry.

Oh Captain My Captain
Picard likes the planet, they are rational folk who go on about intellect, which Riker finds a bit stuffy. I think Picard sees himself as something of an academic, and fancies the idea of a life of the mind. However if he actually lived such a life he would probably miss the excitement of being a starship captain. Picard is happy to help when the PM asks them to detain an escaped prisoner, seems easy enough.
Despite being inclined to like the people Picard trusts his staff -especially Troi- in their judgement about the prisoner. When the PM refuses to discuss the soldiers who were modified in the war Picard wisely says "Matter for internal security. The age-old cry of the oppressor." It's a difficult sentiment to argue with.
Picard personally tells the prisoner that they have to return him to his own people, showing an appreciated level of respect. Despite Picard's obvious disapproval of this particular aspect of their culture, the PM contacts the Enterprise to help them when the escaped soldiers go to the capital. Picard realises that the situation with the soldiers needs to be resolved and the best thing he can do is nothing.

Does Not Compute
When the sensors can't pick up the prisoner's life signs Picard suggests he's an android and Data points out the sensors can detect artificial life. I expect I imagined the disgruntled note in Data's voice, but seriously if anyone is going to account for an android it's Data.
On learning that the prisoner has been programmed Data talks to him about that. The prisoner is one of the first people in the series not to realise what Data is straight away. Though are yellow eyes so unknown in all of the humanoid species that the prisoner feels the need to ask about that? During their conversation Data reveals that he's been programmed with military strategy, which was how he was able to catch the fugitive, but that he is not programmed to kill. I wondered if Data is Three Laws compliant? Then realised he wasn't. I don't think he's ever harmed a human, but I do think that he has by inaction allowed a human to come to harm. Does not being programmed to kill mean Data can't? Is his phaser always set to stun? I suppose we don't really know what Data can do until he does it, so perhaps he could kill but his programming discourages it? It's probably best to discourage death-as-a-solution in a being that has no feelings and would therefore feel no regret.
Besides if you were creating an android for combat you would totally put weapons in there somewhere, like maybe laser-eyes. Data doesn't have anything cool like that. 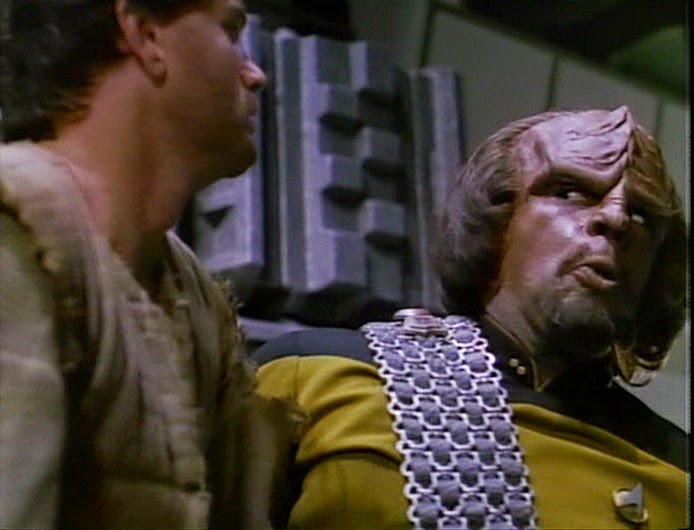 Worf is the best at tracking the escaped prisoner through the ship and scuffles with him a couple of times. When the prisoner's cunning is revealed Worf wonders if he has Klingon blood. I'm never sure if Klingons are supposed to be cunning, or if they're supposed to be straightforward. This guy is actively avoiding combat, which seems distinctly un-Klingon and in a previous episode Worf claimed that Klingons don't bluff. So are they master strategists keen to get the upper hand in a situation, or are they warriors who like the simplicity of direct confrontation? The show can't seem to decide, but hey maybe Klingons are in fact people who have a variety of different traits.

Counsellor Pointless
Troi senses the nightmare of the prisoner, it's strong and strange enough for her to go and see him. He's understandably suspicious of her; the people who altered him were also called counsellors. He plays mind games and is very angry, but that's no surprise. In these interactions Troi realises that her sense of him is entirely at odds with what the PM said and with what he has done. Her insistence leads to the prisoner revealing what was done to him. In a staff meeting Troi insists that he is not inherently violent and that he doesn't demonstrate what would be found in a criminal personality.
I don't consider violence or criminality to be inherent, it strikes me as a dangerous idea. But if they are, what happens (or should happen) to those who do have those qualities? The prisoner admits to violence and murder, but yet something about him means that Troi can't believe his crimes. The outcome seems to be that he should be judged on his personality rather than his actions. This seems like an attitude that should be explored, but it isn't. I suspect Troi's lines aren't meant to carry the weight that they do. Then again she says 'inherent' twice in a few lines, and that feels at odds with what I thought the message of the programme was. Poor O'Brien
When transporting the fleeing prisoner from his escape pod the transporters are able to disable his weapon, but he still takes out the 2-man security team sent to fetch him. When O'Brien tries to get him into a headlock he is attacked and stunned with a stolen phaser.


Staff Meetings: 1
1. Troi explains that the prisoner was an ordinary man who volunteered to fight in the war, but wasn't told what that would mean. At Troi's request Crusher has examined the prisoner and found that he has been altered physically and chemically as well as psychologically, which is why his life signs can't be detected. His own government altered him and other volunteers to make them perfect soldiers, including programming them to survive at all costs and attack whenever a threat is perceived. After the war he was sent to the lunar colony with his comrades, they couldn't be safely reintegrated into society. Apparently no one tried to reverse the alterations 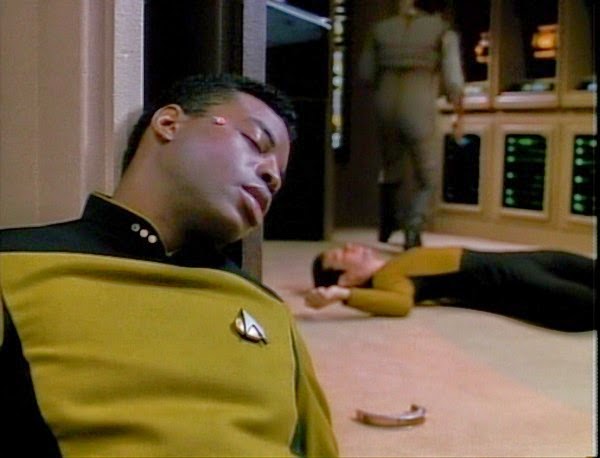 Someone besides Worf emphasises that high security needed, and that's accepted for the most part. The guy's lifesigns are masked, so the Computer and sensors can't track him, making him a greater threat than most visitors. They don't go as far as sedating the guy, as the PM advised. Worf gets to be suitably suspicious and sticks security teams anywhere the prisoner is going. If only that had been enough. It's like these guys aren't used to people attacking and trying to get away from them.
The most secure cell on the Enterprise doesn't look so bad. There's a supply of water and a sink and mirror. I get the feeling they aren't concerned about suicides.
The prisoner manages to take out Geordi and the rest of Engineering single-handed. I guess that the crew in that area don't have weapons, even after the events of Heart of Glory.

The End
Picard returns to the Enterprise and tells Riker to update the report to say that if the government survives the night the Federation will help them reprogramme their veterans. Picard seems confident they will choose to survive and orders Wesley to take the ship away. 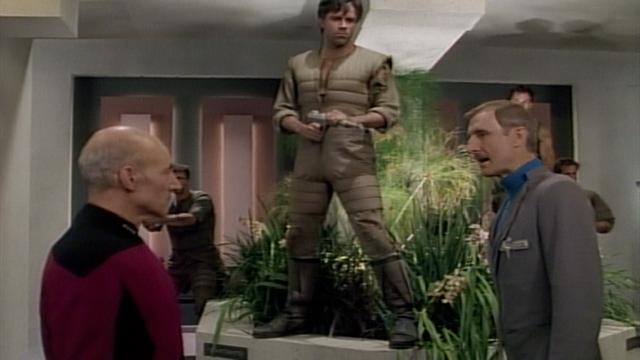