I've put the titles of 25 songs by US band The Offspring into this post. Mostly because it amused me to do so. How many can you find?

What Happens
After going to a cybernetics conference Data creates another android called Lal, his child. Troi, Geordi and Wesley are the first to welcome this special delivery, they're shocked and amazed. Picard isn't happy when he's told. Data allows his child to choose its gender and appearance, and Lal chooses the form of a human female. Data adds the chosen features to his child, he's able to make her look more human than him.
Days go by as Data teaches Lal, and updates her brain using his own, because he wants to get it right. She's got issues and asks philosophical questions about the meaning of life, which Data answers as best he can. Wesley suggests she come out and play with other children by going to school. An Admiral contacts Picard, alarmed by what Data has done, as though it's a conspiracy of one. He insists Lal be sent to Star Fleet research, without Data. Picard disagrees. In a parent teacher meeting Data is told that the kids aren't alright with having Lal in the class, she's so alone. Lal asks Data why the children were laughing at her (she assumed she'd mastered humour) and he has to explain that they were being unkind because they feared her and with kids it's cool to hate. Data goes to Dr Crusher for parenting advice, she suggests he share his experiences with Lal.
Picard is woken by a message from the Admiral ordering the Enterprise be halted so he can come and inspect Lal. Data takes Lal to work in 10 Forward to observe and interact with her elders. Guinan offers to teach her about listening. Lal can use contractions in her speech, showing that she's exceeding Data's programming. Picard breaks the news of the Admiral's visit to Data, who has been sending him progress reports. He assumes the Admiral is questioning his parenting skills, despite Picard's attempt to reassure him. While working in 10 Forward Lal learns about kissing and tries it out on a surprised Riker (who has been away all along).
The Admiral arrives he'd made up his mind, he wants to keep 'em separated, if something happened to them both on the Enterprise it'd be genocide. Picard tries to talk him out of it, and won't order Data to give Lal up, even if it means his job. Admiral talks to Data about Lal and the ways she's exceeded his programming. Admiral interviews Lal, and she reacts badly to the idea that she could be taken many million miles away from her father. She goes to Troi and is overcome by feelings of fear. Meeting with Data the Admiral insists he tell Lal to go, Data refuses. Troi calls Data about Lal because stuff is messed up, she's returned to the lab, where she is programmed to go in case of danger. Lal's emotional awareness is apparently a malfunction. Data and the Admiral work on Lal to save her. The Admiral tells Geordi, Troi and Wesley that he and Data tried to save Lal, but it's hopeless. He's saddened by her loss and impressed with all Data did to save her. Lal says goodbye to her father and tells him that she loves him. Data regrets that he cannot feel love for her and she says she loves him enough for both of them. 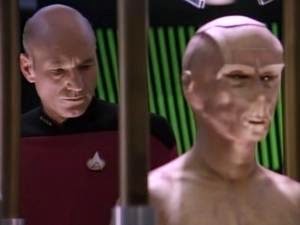 Oh Captain, My Captain
Picard is initially shocked that Data was created Lal and wants to blackball the whole thing. He tells Data that he should have been consulted before Lal was created, but Data points out that no one else has to consult with the Captain before procreating. Picard is weirded out by Data thinking of Lal as his child. As Picard deals with the Admiral he initially wants to defend his officer, then he feels the need to fight for Data's rights as a parent and the androids' right to be a family. He brings up his action from The Measure of a Man where he successfully argued for android sentience.

Does Not Compute (and daughter)
Data started creating Lal after a cybernetics convention, I'm guessing Data is a big hit at those things.
In response to Picard's questioning Data explains that he's the only one of his kind and if anything happened he'd be completely destroyed. Odd to think about as in some respect Data is a total immortal. If he's successful with Lal his continuance is assured. He's apparently not counting his evil brother Lore.
Data decides to allow his child to choose its own gender and appearance, which is nice. Though it's bad that Lal considers its gender-neutral state to be inadequate and Data insists it's essential to choose a gender, you'd hope that'd be less of an issue by then. Though Lal's initial form is creepy-looking, and random crewmembers in the corridors are surprisingly unfazed by Lal's presence. Data is able to give Lal more convincing skin and eye colour, I'm not sure why he hasn't upgraded his own appearance since he wants to become more human. I guess if Lal looks human people won't immediately realise she's an android as they always, always do with Data. 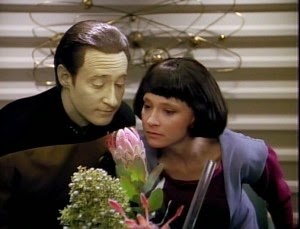 Lal has a lot of questions about who and what she is, why she's different, why she should try to be the same. She develops emotions much quicker than Data, who continues to claim he doesn't have any, which I dispute. There's much fuss about Lal being able to use contractions because Data can't do it, so it means she's exceeded his programming. It seems weird to me that Data can understand numerous languages but can't use contractions, a simple linguistic function, even though he can identify and understand them. As that was a key difference between Data and Lore, there's no reason androids can't use them, it's probably that Data was purposefully created to be less human than his brother and this was one of the methods of achieving that.

Doctor Doctor
Data approaches Beverly for parenting advice when he realises Lal is lonely, he considers the doctor a successful parent. She says that Wesley used to have difficulty making friends (I'm not entirely surprised) and was able to help him with his self esteem by telling him about her own childhood when she wasn't very popular. Data realises that he can share his experience of difficulties assimilating. Beverly points out that he didn't have anyone to guide him, as Lal does. She also says that Data needs to give his daughter love and attention, but Data says he's incapable of providing love.

It's Not Easy Being Troi
Troi advises both Data and the Captain after Lal is activated. She makes a comment about Picard never being a parent, though Troi's parenting experience was not exactly normal and pretty short-lived. In fact Data's experience is better than Troi's in pretty much every way, starting with the fact that he actually chose to be a parent.
Troi goes to the holodeck to advise on Lal's choice of gender and appearance. She's a bit alarmed to hear that they'll be looking at 1000s of options. She ends up going to sleep. If you've ever watched a friend build their avatar on a very customisable game then I'm sure you can sympathise. 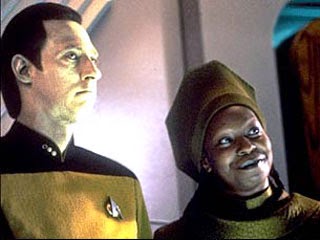 Guinan's Hat: Olive Green
Data thinks that Lal can learn about socialising by being around the crew in a social setting. Guinan agrees and offers to teach Lal about listening, which is her speciality. She provides commentary while Lal watches a couple flirting and kissing, which Lal initially mistakes for biting. The admiral is alarmed that Lal is working in 10 Forward, but his concern seems to be about the waste of her processing power rather than the environment itself.


Let Us Never Speak Of It Again
Lal will continues to exist on in Data's head, but without a physical presence there seems to be little need for her to be mentioned.

The End
Data returns to the Bridge and Picard offers condolences. Data explains that he couldn't allow Lal to pass into oblivion, so he put her programming and memories into himself.
It's like ET for androids, kinda. I guess the head is more important than the heart in beings of intelligence that don't have a circulatory system. Also if Data has all the knowledge and memories of Lal does that mean he'll be able to use contractions from now on? 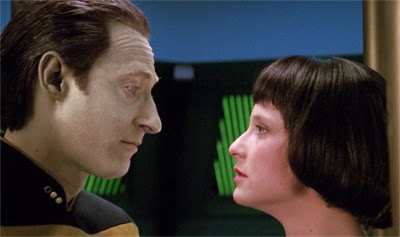