It's been a long while since I've done a history post. I think I'd forgotten that I used to do them. Also I've probably been distracted by TV.


Anyway today in the UK it is Bonfire Night, also known as Fireworks Night or Guy Fawkes Night.

Remember, remember the fifth of November
Gunpowder, treason and plot

Theoretically we are celebrating the 409th anniversary of King and Parliament not being blown up. Though most people are probably just enjoying watching fireworks and attending bonfires, which for the sake of convenience tend to happen more on Friday and Saturday nights.

I see no reason why gunpowder treason
should ever be forgot

The image of Guy Fawkes has come to mean different things over time. Especially recently with Alan Moore's V for Vendetta graphic novel, the film version in 2005 and the use of the V mask from the graphic novel/film by various groups, including the Occupy movement. These are all things that make their own very reasonable point. The original Guy Fawkes wasn't motivated by citizens' rights or ending corporate greed. For him it was all about religion.

The Gunpowder Plot took place at the start of one of my favourite periods of British history, the reign of the Stuarts. James VI of Scotland came to the throne of England as James I in 1603. His mother, Mary Queen of Scots, was cousin to Queen Elizabeth I -who had had her executed, but possibly didn't really mean to. This was the first time England had had a King since young Edward VI, and the first time there had been an adult King with a family since Henry VIII (he of the many wives).

In 1603 England was a Protestant country and Catholics were persecuted. They had to pay recusancy fines for not attending Protestant Church services. Many rich Catholic families would attend Mass in secret, performed by travelling priests and Jesuits who would be tortured and executed if discovered. Many stately homes from the period have priestholes, hidden rooms and spaces where the Jesuits could hide if the house was raided. The general attitude towards Catholics in England and the 17th Century can be compared to the fear and paranoia of the 'reds under the bed' attitude in 20th Century America.

When James I came to the throne English Catholics had reasons to be hopeful, his mother had been Catholic, though she'd barely featured in his life due to her extended imprisonment and eventual execution. His wife, Anne of Denmark, was also a Catholic. Before becoming king Jame hads made promises of leniency and religious freedom to Catholics who came to see him. At first various measures were relaxed and recusancy fines were dropped. This led to Protestants at Court, especially the more Puritanical ones, protesting and pressuring James to reverse his lenient measures. One of the stronger anti-Catholic voices was that of Robert Cecil, who had been prominent under Elizabeth and was one of James I's chief advisers(check). The Catholics of England felt they had been betrayed, especially when James denied ever making any promises, brought back recusancy fines with arrears and ordered all priests out of the country. This new dynasty would be no more friendly to them than (most) of the Tudors had been.

The Plot
The chief arhcitect of the plot was Robert Catesby, who seemed to be a charismatic and convincing guy. He and 5 friends initially discussed blowing up the House of Lords during the OPening of Parliamen(check) thus removing King and Parliament altogether and creating a power vacuum. The plan was to take James' eldest daughter, Princess Elizabeth, and install her as a Queen who would bring England back into the Church. They seemed to think they would meet with a swell of support from all English Catholics, who would ride forth to crown their new Queen.

In fact Catesby and co were radical hot-heads and didn't even have the general support of their oppressed community. Most Catholics were willing to keep quiet and hope King James would return to leniency. The Plot also was not sanctioned by the Pope, the Church, or even the Jesuits who were protected and hidden by the plotters and their families. Even Catesby saw the Plot as a last resort and the plotters tried to find other means, including going to Catholic Spain to see if there would be help from overseas. As it was Spain made a peace treaty with England that made no mention of the treatment of English Catholics. What the plotters did get from Spain was a gunpowder expert called Guido Fawkes. Guy Fawkes had left England to fight alongside the Spanish, which was why he often went by 'Guido' (the Spanish version of Guy). He and the other plotters gradually filled a basement underneath the House of Lords with 36 barrels of gunpowder, this included replacing barrels that had spoiled and of course always being very careful they were not discovered and their powder did not ignite prematurely* [*Diana Wynne Jones Witch Week]. At the start of November, assuming the authorities had no idea of their plan, the rest of the plotters left London, leaving Guido to watch the basement and start the explosion. Guido was probably chosen for this as his career fighting in Europe meant he had experience with Gunpowder.

As it was the authorities had known for days that something was coming. The Parliament buildings were searched and Guido was found, initially claiming to be a servant called John Johnson. He was arrested and interrogated. Torture could be used by permission of the King, who unsurprisingly granted it. Guido was tortured for days, revealing the Plot, but only naming names after being told his fellow conspirators had been arrested. His final signature is barely legible and a sign of his suffering. Fawkes was eventually hung, drawn and quartered along with 3 of his fellows.

It All Went Wrong

The main reason the Plot was discovered was because of the Monteagle letter. Over time the Plotters grew from a handful to a group of 13. One of the plotters sent a letter to his brother-in-law Lord Monteagle advising him not to go to Parliament. The letter was received on 26 October 1605  and spoke of "a terrible blow". Instead of burning the letter, as it advised, Monteagle took it to Robert Cecil. There are claims that Cecil had known about the Plot for along time, and allowed it to run its course in order to further implicate and demonise not just the Plotters themselves, but Catholics in general. I don't believe Cecil instigated the Plot, or knew about it at its early stages, but he did wait until the rewards of discovery were maximised, and waiting almost a week after getting the letter before telling the King.

News of the arrest of "John Johnson" spread fast and the Plotters fled into the West Midlands.Back then there was no major city in the region, Birmingham (which now dominates the area) was a small town among other towns of similar size. Revelations from London meant a lot of the hidden priests went out to check on colleagues and were caught. The remaining Plotters raided Warwick Castle for supplies, but received little help or sympathy from the family and fellows, who were terrified of being branded traitors too. The fled to home of one Plotter and spread some of their damp gunpowder in front of the fire to dry - this is why these guys needed a powder expert. A spark set it off and  badly burned three of them. Eventualy the Sheriff of Worcester arrived, besieged the house and the last Plotters were killed or arrested.

The outcome of the Plot was that life got even harder for English Catholics, with strict limitations enshrined in law, some of which were not repealed for centuries. Jesuits and priests were blamed and hunted more ruthlessley, even though none had known of or condoned the actions of the Plotters. Parliament felt a wave of goodwill towards the King, and Cecil leveraged this to get a lot of money off them. Foreign, Catholic powers were assured that England bore them no ill will, and they all denounced the Plotters.

Aftermath
When Parliament finally met (in January 1606) they declared that 5th November should be an annual commemoration of the near miss. The act remained in force until 1859, and even today we still celebrate it. Bonfires, fireworks and burning effigies of Guy Fawkes were soon part of the festivities. There's a tradition of kids making effigies using any old clothes and and paper, then selling them in the street with the cry of 'penny for the Guy'. I've never seen that happen, but when I was a kid it was the kind of thing adults talked about from when they were kids. Guy came to mean a man in scruffy clothes, and then any male.

Bonfire Night is one of the main UK holidays that remains largely unchanged in how it's celebrated, though nowadays the anti-Catholic sentiment and effigy-burning have been removed. Most other traditional holidays (Christmas, Easter, etc.) have had their traditional festivities altered over time. The Victorians often pulled stuff like this, Queen Victoria being responsible for importing and promoting the traditional German-style Christmas celebration. It's mostly about people enjoying fireworks, bonfires and toffee apples nowadays, and November is a good time to have them because it's dark by 5pm. 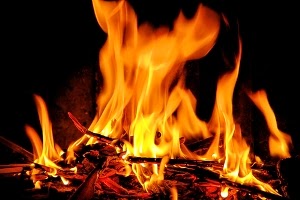 If you're interested and want more there's Gunpowder Plot Society, their website has a lot of info.
Posted by Catherine Hill at 18:59

Email ThisBlogThis!Share to TwitterShare to FacebookShare to Pinterest
Labels: history