What Happens
The Enterprise is doing something dull but necessary when a less-prestigious Starfleet ship unexpectedly catches up. It brings secret new orders and a mission specialist. He is telepathic prodigy who specialises in first contact situations with non-humanoid alien. He used to be Troi's patient. He's also infamous for being involved in a disastrous first contact in which 47 people died, including people Riker knew.

Tam, the telepath, is hard to get on with. He insists on being alone and responds to people's thoughts before they vocalise them. The only person whose mind he can't read is Data, and so he finds the android's presence restful. A science probe orbiting a sun about to go into supernova has discovered a living, organic starship. It has been codenamed Tin Man. The Enterprise must go and make contact, and quick, not only is the sun going to explode but the Romulans -who claim that part of space- are sending ships of their own. Picard assigns Data to work with Tam, who is more concerned about the lifeform than the Romulan danger.
Troi goes to her former patient and asks him about why he's making them dislike him. He reveals he has enough self-doubt and guilt without knowing that others doubt and distrust him. He was on a planet with beings that think so slowly they were very relaxing to him. He only exposed himself to a big ship because he was fascinated by Tin Man. He reveals that despite the lightyears distance he has made contact with the giant entity. 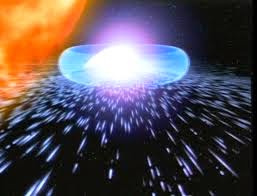 The Romulans have been tailing the Enterprise, a slower ship nearly destroying its engines to keep pace. When they reach the unstable sun the Romulans attack the Enterprise and head to Tin Man. The telepath senses that they will contact Tin Man or destroy it. He sends a telepathic warning; Tin Man has a flashy self-defence mechanism that destroys the Romulan ship and damages the Enterprise. More Romulans are on the way and Geordi works fast to fix the damaged, especially as the sun could blow at any minute. Picard takes the telepath to task for his carelessness. Tam insists on beaming aboard Tin Man, Data offers to go with him. At first Picard won't have it, but when more Romulans show up he allows it.
The Romulans are on a revenge mission and will kill Tin Man. On Tin Man Tam gets a memory overload but swiftly bonds with the creature, who came to the unstable sun in order to die after its crew died. It's very old and tired. Tin Man creates a chair for Tam, who announces that he will stay, he finally has peace within Tin Man. Data tries to remind him of the mission, but Tam tells him to explain his reasons to Starfleet. The Romulans approach and Tin Man does it's thing, pushing both Romulans and the damaged Enterprise out of the orbit of the sun to safety. Data is returned somehow (not by regular transporter) and Tin Man and Tam leave. 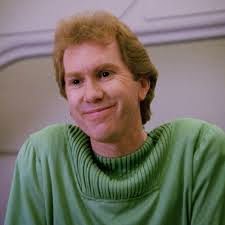 Guest Star
Tam is Harry Groener. Best known, to me anyway, as the Mayor from Buffy - and the Secretary of West Wing. The internet has just told me that he's also Clint, Ted's hippy stepfather, from How I Met Your Mother, which I totally didn't realise. I suspect the beard did it. I assume that for this part he is wearing some kind of contact lenses as his eyes are really, noticeably dark. Either that or his pupils are enormous.
Agriculture in the

Oh Captain, My Captain
Picard is old friends with the Captain that catches up with them. There's a slight sense of rivalry because the Enterprise is super fancy and this guy mostly ferries stuff about.
Picard is hard on Tam. He's a private person so perhaps he's generally wary of telepaths -as seen by his attitude to Lwaxana Troi. He reprimands Tam for forgetting about the Romulan threat, and adopts an necessary hostile and peevish tone when talking about him with Troi and Dr Crusher. His personal feelings do seem to be a factor, but Picard's concerns do make sense. He puts Data with Tam to ensure he doesn't make dangerous mistakes or oversights.

Riker: lover, adventurer, middle-management
Riker tells Geordi all about the Incident. It's clear that even though the official enquiry blamed the mission's Captain, Riker reckons Tam was actually to blame for the previous loss of life. Of course Tam knows Riker thinks this, and calls Riker out on his blaming thoughts. 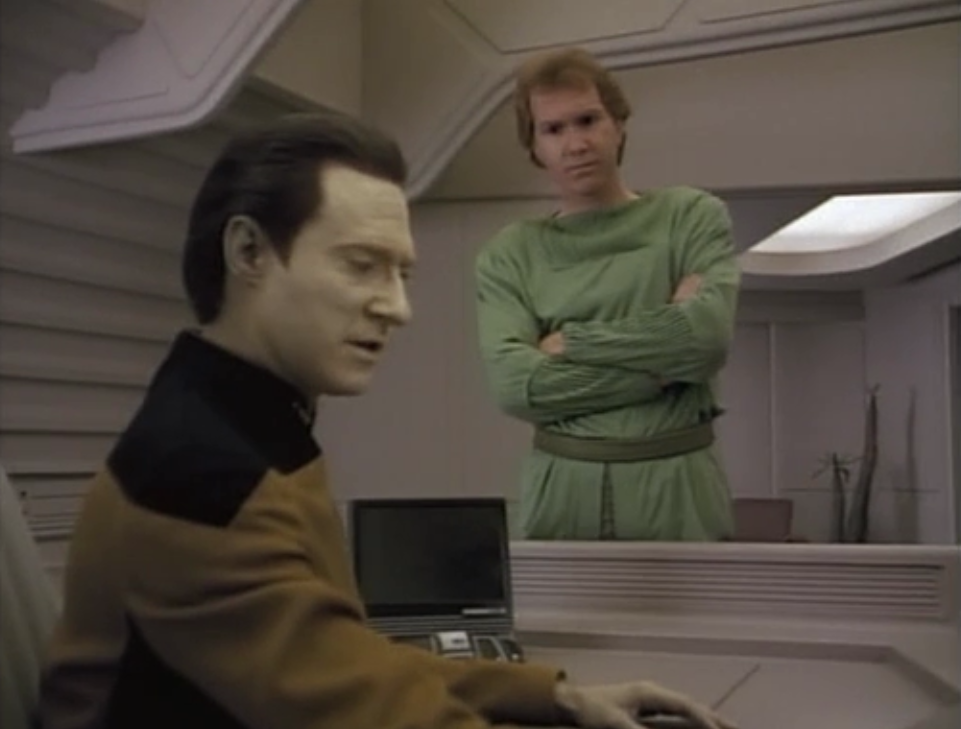 Data is restful to Tam because he can't sense his thoughts and emotions.  For a while Data is the only person Tam sees. Tam tells Deanna that he enjoys getting to know a person gradually by talking, it's novel for him. Data suggests to Tam that he can't sense anything because he is artificial, Tam tells Data that he's just different and though he may have heard otherwise it's not a bad thing.
Data offers to go with Tam to Tin Man and though Picard has his reservations he eventually allows it. Data points out that Tam likes him, and Data will be able to remind him of the mission. In the end Data doesn't seem able to sway Tam, but then Tam has already decided he'll fulfil the mission his way.
Data's talk to Troi at the end reveals he's growing in emotional capacity and awareness.

Blind Engineering
There's no real B-plot here, but due to the Romulan attack and the effects of Tin Man's defence mechanism Geordi must work hard to get the shields back up and the engine working properly. He's also pressed for time as more Romulans are approaching, and the sun could supernova (which the shields can't deal with). He gives orders to silent-and-obedient engineers, says words, taps consoles and has to override safety procedures. Busy, busy, busy. 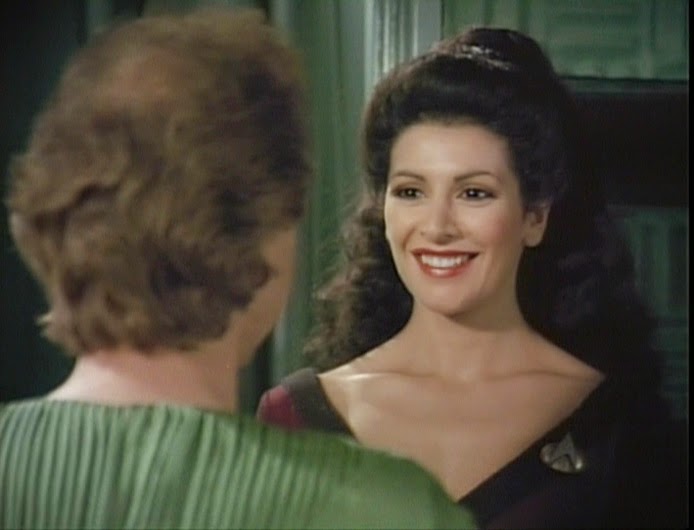 Troi tells Picard Tam was her patient, which I would've thought would be protected by confidentially (do they have that in Trek?). Later she discusses his state of mind and medical history with Picard and Crusher. She is the most sympathetic, and reveals that he was born with his strong telepathy instead of growing into it like most Betazeds. His condition is rare and incredibly stressful for him.
When she visits him his fragile mental state is apparent as he opens up to her about the chaos of thoughts and feelings he experiences being in proximity to so many people. He never could block out thoughts. He admits that he should have been more forceful with the captain during the Incident. Troi is one of the few who understands what his life is like, and tries to comfort him. It sounds as though they were both out of place on Betazed, searching for somewhere to belong. Presumably this was because he was too telepathic, and she not enough (being pretty much only empathic). He comments that Troi has found her place to belong. She's shocked when he lets slip that he's already in contact with Tin Man, it's impossible even for him, but Tin Man is very powerful.
Troi is concerned that Tam is losing himself when he merges with Tin Man, she fears this and asks Picard not to let Tam go aboard Tin Man, even though it's all he wants. Picard is tempted to send Troi with Tam when he boards Tin Man, but Data makes the case that he should go.


A Ship, A Living Ship 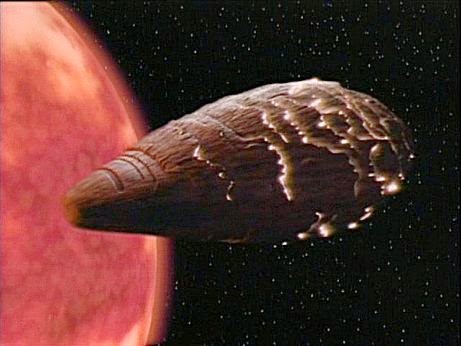 So a probe finds and scans a massive, organic starship and the codename they give it is Tin Man? Really? It's not made of metal, which apparently they can tell, as they scanned it's structure and skeleton. I do not understand where the name came from, and no one ever explains. On the other hand the designers did well here, we only see brief images of the ship-creature and the info in the briefing is background stuff, but it looks good and like someone put some thought into it.
It's sad that Tin Man is suicidally lonely. It's not seen any of its kind for perhaps millennia, and its crew were all killed by radiation that Tin Man was able to survive. I wonder what it's crew were like. There's little indication that they were humanoid. Tin Man can alter it's internal structure to fit its inhabitants, creating a chair out of nothing, so they could have looked like anything.
Tin Man's defense mechanism is a cool spinny, energy burst thing, which is clearly a lot more deliberate than Starburst. It can also control it, using it to push the Enterprise and Romulan ship away from the dangerous sun.

Girl Talk
Troi and Crusher discuss Tam sympathetically. Beverly discussing what's in his medical records and Deanna explaining about his history and experience. Beverly speculates on how stress can affect different people. It doesn't pass the Bechdel test as they're talking about Tam, although depending on how you look at it they are having a professional conversation.
Also Picard is there being peevish about Tam's status as expert, for some reason. 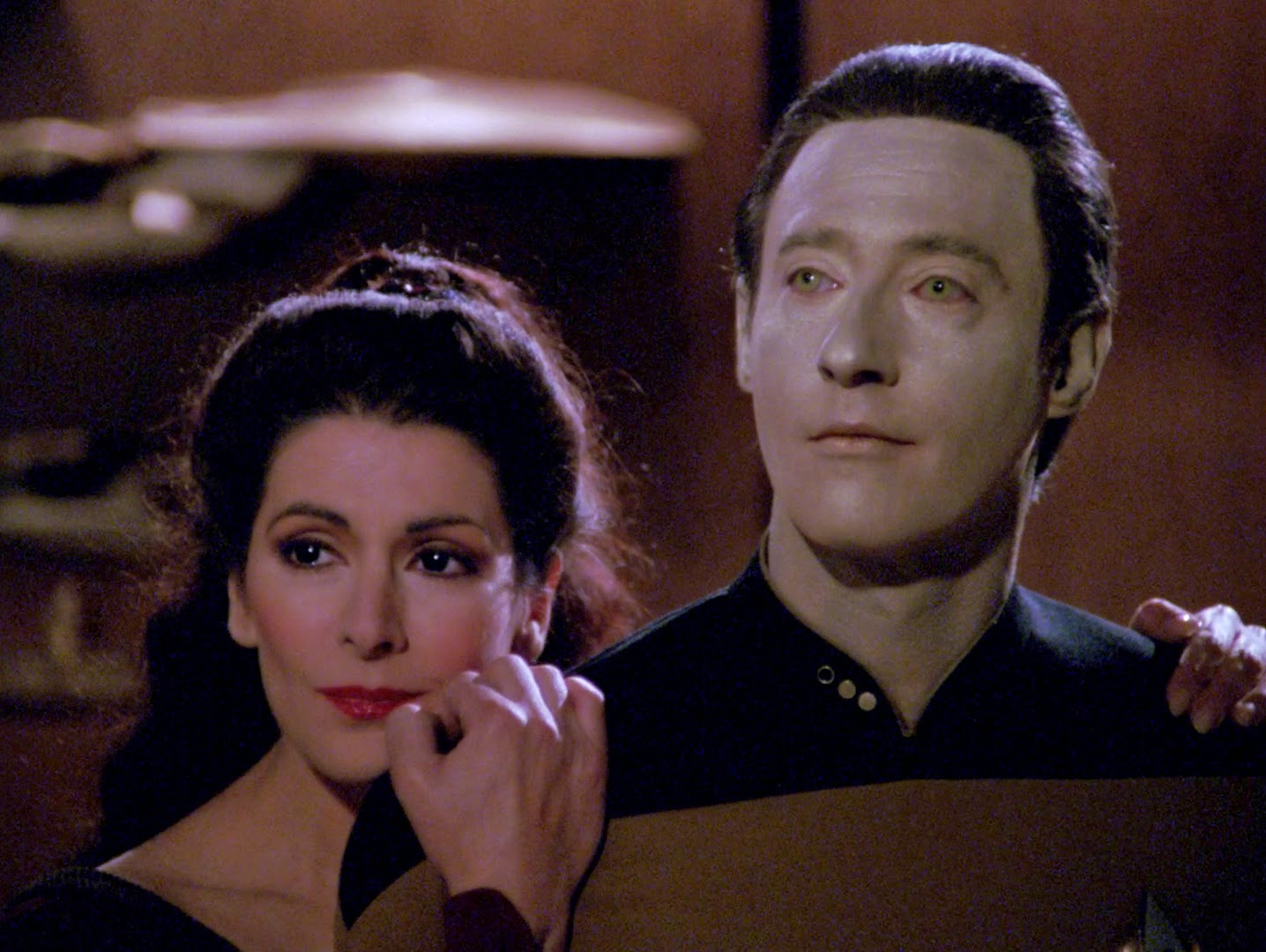