Cardassians, newlyweds and why counselling should be given to veterans who've experienced trauma.

The Enterprise is attacked by a Cardassian ship near a border almost a year after a truce between that species and the Federation. The Cardassian Commander (or Gul) says that a Federation ship destroyed a Cardassian space station a couple of days ago. Picard doesn't know anything about this and tells the Gul that the Federation wouldn't do that, he promises to investigate so the attack is halted. Starfleet confirms that the Phoenix, captained by a guy called Maxwell, attacked the Cardassian station. Picard is ordered to work with the Cardassians to find Maxwell and bring him back, while keeping the peace.
The Cardassian Gul (who I think of as not-Dukat) comes aboard with two aides to observe the Enterprise's progress through Cardassian space. It turns out O'Brien (whose new marriage is marred by unsatisfactory breakfast) served under Captain Maxwell during the war with the Cardassians and so he's asked to advise on Maxwell's character. O'Brien admired Maxwell and insists there must be a misunderstanding. Maxwell lost his family in a Cardassian attack and the Gul believes it's a revenge mission, though O'Brien insists Maxwell wouldn't do that. O'Brien is cold to the visiting Cardassians, even when they try to be friendly.
The Phoenix is found approaching two Cardassian ships. Picard refuses to take the military option as the Gul wants, but Maxwell ignores the hails from the Enterprise and the Phoenix flies aggressively. Picard orders Worf to give a Cardassian ship information that will help it stop the Phoenix, but the Phoenix destroys both Cardassan vessels anyway. Picard orders the Enterprise to pursue the Phoenix. 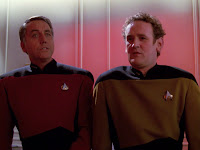 After talking to Picard about Maxwell, O'Brien apologises to a visiting Cardassian about being rude before. They talk a little about the war and O'Brien shares a haunting memory. They catch up to the Phoenix and Maxwell beams aboard, all friendly-like. The two Federation Captains talk and Maxwell reveals that he thinks the Cardassians have a secret base near Federation space and the ships he took out where supplying it. Picard orders Maxwell to come back to Starfleet with him, but spares him from arrest. Maxwell seems to agree, but while en route the Phoenix veers away and goes after another Cardassian ship. Maxwell tells Picard to board it and see for himself, but Picard refuses and wants to stop the Phoenix instead. O'Brien knows the Phoenix and her Captain, so he beams aboard to speak to Maxwell, who realises he can't win. Maxwell surrenders his ship and is confined to quarters for the trip back to Starfleet. Picard has a final word with the Cardassian Gul about peace, he thinks Maxwell was right but he didn't want to start a war.


Guest Star
The Cardassian Gul is played by Mark Alaimo, who plays Gul Dukat in the Deep Space Nine. He looks different, not quite like the later Cardassians (facial hair, darker skin, different forehead), but the voice is the same. This means that at no point do I believe anything this guy says, though at least he doesn't seem quite as phoney as Dukat could be. Of course he's not trying to be pseudo-conciliatory here.

Oh Captain My Captain
Picard does his usual thing of being sensible and firm and diplomatic. He stalls the Cardassian attack on his ship, he balances the security of Starfleet ships against keeping the peace and promoting good relationships with their allies. He doesn't want to believe a fellow Starfleet Captain would make an unprovoked attack on an ally's ship, and that belief delays him and means ships are destroyed. Picard is stern with Maxwell, but still treats him with respect. It's only once Maxwell has proved himself unreliable that Picard treats him like a criminal and removes him from command. Picard comes to believe Maxwell, but he won't disobey orders and knows promoting peace is the priority. At least Starfleet now know to be wary of their ally.

Klingon Warrior
Worf doesn't like Cardassians, for no clearly defined reasons. I get why he doesn't like Romulans (what with them slaughtering his family), but I think this is the first time we see Cardassians so why should Worf dislike them? Does he just dislike other warrior races? Do they all have this way of snarking at each other? Is it a macho thing? Also Worf should never be allowed to say things near any kind of peace conference. "Trust is earned, not given away." While he has a point he doesn't seem to realise that it's the same for both sides.
Worf makes sensible security suggestions regarding the visiting Cardassians, including a security detail and restricted access to sensitive parts of the ship. As ever Picard is all like 'oh silly Worf.' I get that the Captain doesn't want to make their guests feel like prisoners, but securing sensitive parts of the ship just seems like it should be the standard policy. There' really no good reason that everyone who comes aboard should have the run of the ship. Riker agrees with Worf that access should be limited on this occasion. Though no one actually cites all the times that such limitations would have been useful in the past, so it's not clear whether they're learning or whether its prejudice. 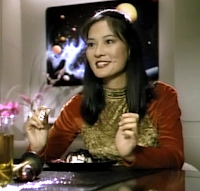 Newly-wed O'Brien is dissatisfied with the vegetarian seafood breakfast Keiko serves. She says it's what she's used to. O'Brien is used to stodgier breakfast food and wants to show this to Keiko, even though she doesn't seem keen. What I don't understand is why they don't just eat what they both want for breakfast. I mean it's replicated food, you just ask the hole in the wall for what you want, so it's not like anyone's going to any effort. I have been married for over six years and I can probably count on my fingers (maybe toes too) the number of times me and my husband have had the same breakfast. I think this is meant to show Miles and Keiko getting used to each other, seems odd to me that they weren't living together before they got married. 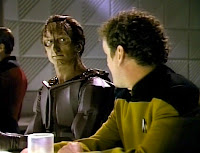 O'Brien is cold to the Cardassians when they suggest a friendly drink, but later tells Keiko he thinks it's bad that people still hold things against the Cardassians. I think that might have been his way of acknowledging his behaviour without admitting to it. Keiko sensibly points out that it's understandable people who fought in the war would still have bad feelings towards their erstwhile enemies (something Starfleet don't seem to have realised). O'Brien pretends to feel fine but it's clear that he doesn't. Later O'Brien sits down with one of the Cardassians and they share their regrets about the war. O'Brien is haunted because he had to kill someone.
O'Brien's loyalty to Maxwell is strong and it's clear that they through a lot in the war and deep bonds were formed among those who served. O'Brien initially gets touchy when it is suggested that Maxwell was the aggressor and insists there's something else going on. He doesn't want to admit how war has affected the man he admires. After O'Brien's own realisation about how the war affected him he realises that the same must be true of Maxwell. His knowledge of the man and the ship mean he can get through where others can't. 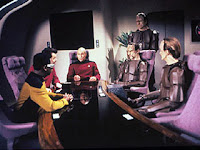 Staff Meetings:
1. Senior staff report to Picard and the Cardassians, O'Brien talks about Maxwell and gets a little heated considering he's not normally invited to these meetings.
2. Picard and Maxwell talk. At first Maxwell talks to Picard as a respected equal, but when it's clear Picard doesn't approve of what he's done Maxwell calls him a bureaucrat and gets increasingly agitated so Picard gets firm.

Future is Better?
So up until a year before this episode the Federation had been at war with the Cardassians? This war has presumably been going since before the Enterprise's first flight, since O'Brien fought in it, so why haven't we heard about it? We don't know what it was about or why it started or ended.
Shouldn't Maxwell have been given counselling or a psych evaluation after his family were killed in a wartime raid? Couldn't he have been posted anywhere besides the Cardassian border? There doesn't seem to have been any provision for the mental health of those affected by military action. Way to go Starfleet. 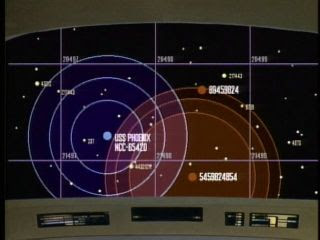 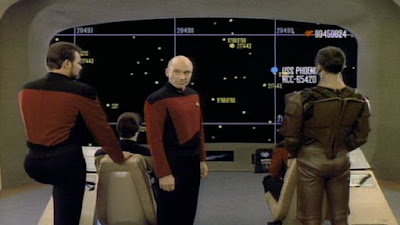