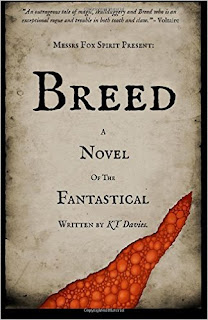 The inventively foul-mouthed, half-human thief known as Breed encounters a demon after escaping from a dragon, returns home to assassination attempts, is imprisoned and then released into a well-meant but deeply inconvenient slavery spell. Breed ends up travelling with a soppy priest, a disgusting beggar and a rat-faced girl, searching for a powerful relic belonging to a legendary hero. Even as Breed tries to escape from all enemies, allies and responsibilities things get more complicated and deadly as prophecy and politics influence events and motivations.

This story is told entirely from Breed's own irreverent, cynical point of view, and though the character largely resists affection or sympathy they are mostly very amusing. The action is quick-paced with Breed running, falling and sometimes being bundled into further adventure. They are a reluctant hero insofar as being heroic, preferring self-preservation over noble action, but Breed isn't slow to get into a fight and has been raised by a deranged crime boss as a thief, fighter and partial magic-user. Breed is an interesting hero in many ways, half-human and half-thoasa (a lizard-type warspawn) with orange scales, spikes, seven-toed feet that don't fit into human shoes and senses that humans can't match. Everything is told through Breed's viewpoint, so there's a lot about the character and the world that is left to the reader to figure out, which makes for an absorbing read. The world we see through Breed's eyes is grimy and soiled with all manner of unpleasantness. This is worldbuilding from the lowest levels, with a definite subterranean theme to many of the locations and plenty of insalubrious characters. Sewers, caves and tombs feature prominently in the story, as do street-level criminals and regular common folk. When the action takes place in loftier, more respectable venues such as courtrooms and temples that's when things are likely to take a turn for the worse, not that there are many turns for the better. The world has a strong sense of history, with a past that sounds like pure epic fantasy, when mages created the non-human warspawn to battle demons.

While the story is fast-paced, action-packed and fun this book is not a only an adventure. There's a theme of inequality within the story too, but it's handled subtly, present but not overpowering. Breed's mixed parentage means people make certain assumptions, and for the most part the character is jaded by this treatment, nowhere near happy but used to it. It's clear that humans occupy the positions of power in this world and those like Breed who aren't fully -or at all- human are subject to suspicion. There are humans who don't have a problem with non-humans, but they are either the exception or else they're apathetic about how non-humans are treated in society. The broader plot of the book makes the scale of the prejudice explicit. The non-human characters who are doing well are either involved in organised crime or are in underground communities. As in Davies' earlier book (The Red Knight, which is also a good read) the supporting cast contains a lot more women than is common in secondary world fantasy and there's no sign of traditional or assumed gender roles. There are female guards, magistrates and criminals scattered throughout, with no indication that a person's gender might affect a person's ability within these roles. It's sort of sad that such a simple thing still feels noteworthy. There's a scene with one of the antagonists that inverts the gender roles of a common trope in fiction, dealing with it in a more nuanced manner than is often seen and thus highlighting the issues with the usual approach. I shan't say more for risk of spoilers but it was something that surprised me.

Breed is an engrossing read which is amusing and makes you think. Definitely recommended for fans of epic and comic fantasy.
Posted by Catherine Hill at 13:27