An interesting episode showing that space isn't full of promise for everyone. Though Riker is treated really badly here. 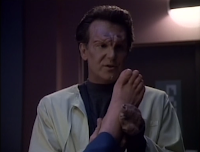 Riker is rushed through an alien hospital, unconscious and in alien make-up. The medics looking at him are shocked to find that he is not of their species.When he wakes Riker is questioned by doctors and pretends to be a man from that planet with genetic defects. As crazy as it sounds some of the medics think this could be some kind of alien.
A Science Minister argues for space exploration, but a Defence Minister argues against moving away from their traditions. The planet's Chancellor agrees that they can make the attempt to break light speed but then they should stop. When Science Minister is alone Troi and Picard beam in to tell her aliens exist. As her species are about to achieve warp they've come to say hi. They take her to the Enterprise and she looks at her planet from orbit; she's awed and very open to the experience. She says that most people on her planet believe they're the centre of the universe, so aliens would be a nasty culture shock. Picard and Troi are aware of this attitude and a few years ago the Federation sent down a covert team to find out more about the planet. When Riker went down to liaise with the planet-based team he was caught in violence and they've lost track of him. Science Minister says that they shouldn't mention any this to the Chancellor. At the medical centre Riker is held under guard. They know he's not from the planet and though they're trying to keep it secret the word will spread and so will panic. 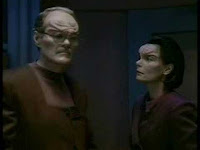 Troi and Picard are introduced to the Chancellor by Science Minister, and they show him the Enterprise too; she's really excited but he's overwhelmed. After a drink with Picard the Chancellor feels more positive. Meanwhile Riker is approached by an alien fetishist at the medical centre who offers to help him escape if he'll have sex with her, which we have to assume he does. She's actually not much help and Riker is chased, beaten and restrained.
The Chancellor tells the Defence Minister about the Federation and he is alarmed. He reveals that an alien spy has been captured and is being held at a medical centre. Science Minister says she knew and it's her fault they didn't tell the Chancellor about Riker. Defence Minister wants Riker interrogated, though he's badly injured and the drugs they'll use could kill him. Picard asks the Chancellor for Riker back and tries to accept responsibility for the situation, the Chancellor says Riker's being questioned.
Defence Minister goes to Riker, who is suffering. He has Riker's phaser and says that the aliens are too dangerous and strange to be allowed contact with his people. Even if they mean well their existence will undo his society and its values. He tries to make it look like Riker shot him. A shocked medical team arrive and make an emergency phone call, then Crusher and Worf beam in and Crusher talks to them doctor to doctor. The Defence Minister isn't dead, he didn't know about the stun setting. Both patients are taken to the Enterprise sickbay. The Chancellor is saddened by what the Defence Minister did, but knows this is a sign of how people will react. He says he'll scale back the warp project and devote resources to education and social development to prepare for the day when they are ready. There'll be rumours and stories but most won't be believed. Science Minister disagrees but the Chancellor asks the Federation to leave them alone for now. Science Minister asks to go with the Enterprise. 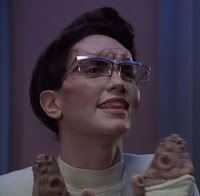 Bebe Neuwirth plays the woman at the medical centre who lusts after Riker. She most famously plays Lilith in Cheers and Frasier. While it was cool to hear that she's a Trek fan I think this is the only role of hers that I've seen and didn't like. Not that I think her acting is bad here or anything, it's just that her character's behaviour is unpleasant and the ethical implications are unexamined. It's clearly meant as a humorous, throwaway encounter, but it's not funny, though I don't blame the actress for that.
A much better and funnier crossover between this actress and TNG occurs in an episode of Frasier where Brent Spiner plays a man Lilith meets on a plane. They bond over being pale, which I could relate to. 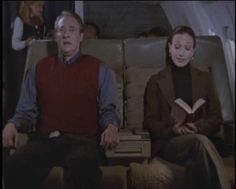 Oh Captain My Captain
Picard approaches the Science Minister to introduce her to the idea of the Federation and the interstellar community her people are close to meeting. This is done sooner than usual because of Riker's disappearance and against his better judgement he agreesnot to reveal Riker's presence (or that of their surveillance team) to the Chancellor. Picard's chat with the Chancellor over family wine feels a bit like they should be wearing smoking jackets and sitting in old leather chairs. Picard reassures the Chancellor that they aren't conquerors, that they will respect his wishes about how they interact with his people, or whether they will interact with them at all. Though it's a culture shock the Chancellor is positive, though he's aware Picard is a diplomat and wants to be cautious. After Riker's presence is discovered Picard tries to take responsibility for omitting the information about the surveillance and acknowledges that it was a mistake. When the Chancellor won't say whether he'll give Riker back Picard beams away without trying to argue further. Picard is happy for the Science Minister to come with them, respecting her love of space and determination to fit in there, though there doesn't seem to be a plan for what to do with her. 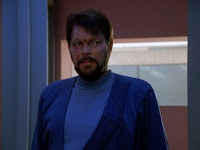 Riker's love of risk-taking is probably why he's gone to liaise with the surveillance team (who we never see, which is presumably why they have that job). It does require more research and surgical implants than a usual away team mission. Getting taken to a medical facility is what every alien infiltrator dreads. He sticks to his character background and uses genetic defects to explain his weird pink digits and fake forehead, but it doesn't hold up for long. The chief medic tries to be sensible, keep it quiet and contained and check there's no medical precedent, but members of his staff are excitable and Riker is really weird.
Riker's escape attempt is facilitated by an alien fetishist. It seems unlikely that -in a culture that doesn't believe in aliens (and reminds me of 1950s America)- there would be many people who have "always wanted to make love with an alien". It's even more unlikely that such a person would happen to have an alien brought to their work place. Having found herself in the astronomically unlikely position of being able to fulfil her fantasy this woman (who I think is a medical professional) coerces Riker into sex, which is creepy. Riker doesn't seem threatened by this, but he is perturbed and even if he might have wanted to under other -consensual- circumstances he's in a terrible situation. He's injured, alone, in danger and she manipulates him. Riker tries to point out that there are differences, mercifully without going into detail, but that just makes her more keen. It's actually stupid as well as creepy because she doesn't know what she's getting into. It could be disgusting or painful or something that doesn't seem like sex to her. It could lead to disease or death or pregnancy, and then she's got an alien baby on her fingerless hands. Thankfully we see nothing, but it's implied that events transpired. Considering what Riker does to secure her help she gains him nothing; in fact the escape attempt gets him in worse trouble. The episode doesn't notice how gross this is, though it's not portrayed as romantic or sexy (thank god) there's no exploration of the ethics or implications of the situation. Disappointing but not surprising given the apparent genders of those involved.
When Defence Minister visits Riker is very sick, revived by drugs that are killing him, but still able to talk about the Federation's message of peace. It turns out that Defence Minister isn't interested in Riker's intentions, only the effect that aliens will have. Riker objects to Defence Minister trying to make his suicide look like murder, and I don't think that he was just telling him the phaser was on the wrong setting.


The Prime Directive is A Harsh Mistress ...usually
Picard briefly describes the Prime Directive as not interfering with the natural development of a planet. It's been made clear that pre-warp societies are off limits, but once they're about to achieve warp the Federation does a tonne of research (which is a sensible approach to aliens), and secretly sends people in to observe, which is kinda creepy. Picard says lack of prep caused the Klingon conflict and he thinks the secret observing has helped more than it's hurt. But who has it helped? I don't know how they find out when a planet is ready, how many species are they watching? There are other episodes where the Federation are secretly observing people that are far from space travel. That seems like curiosity. Do they observe everyone they encounter? For people who don't want to interfere the Federation have certainly gotten comfortable with intrusive surveillance. How necessary is all this anyway? While deep space confrontation isn't the best introduction and has scope to go wrong this is a lot of effort and resources devoted to simply avoid that. I suspect this approach also has a fair bit to do with marking territory. The Federation presence keeps other advanced powers away. When you look at what the Cardassians did to Bajor that's not necessarily a bad thing. The Federation won't conquer, compete or share tech, they'll only guide, but what are they guiding others towards?


The End
The forward-looking Science Minister asks Picard to take her away from her planet, and the Chancellor says she won't be happy on the planet with the restrictions he'll have to impose. Picard warns they might not return while she's alive and that she might not be prepared for space, she says she's been prepared since she was 9 years old. Picard asks Worf to assign her some quarters and then says farewell to the Chancellor, who hopes they'll be able to meet again someday. 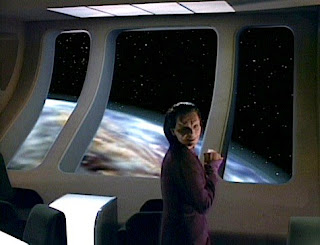