I think the Red Dwarf version was funnier, but this is reasonable. 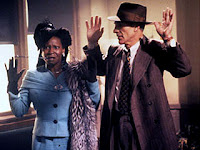 Picard has declared leisure time. Riker, Troi, Geordi and Worf are doing tai chi with various unnamed crewmembers, Crusher is putting some bulbs under a desk, and Picard and Guinan have finally arranged that holodeck session we've never heard them talk about. Guinan goes into the Dixon Hill programme, flashes her confusing, primitive suspenders at the holo-receptionist and eventually gets to see Picard with his trench coat and dodgy accent. There's a holo-shoot-out and Guinan questions Picard's idea of fun, so he explains the joy of a mystery and following clues (something makes me think this is foreshadowing). Data rings the holodeck on the holo-phone so as not to spoil the illusion or bother the imaginary people and tells Picard he needs to return to the Bridge. Even though every planetary system seems to have at least one Class M moon it turns out that whenever anyone notices a new one they have to stop and investigate. As they approach there's a small wormhole and everyone is knocked out except Data. 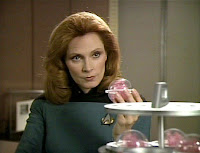 Everyone wakes up and Data says they were out for 30 seconds. The wormhole was a small, local one (not like those big corporate wormholes), so they aren't too far away from where they were, in star ship terms anyway. The planet they spotted before turns out to be the wrong kind now, Data says the initial scan must have been wrong. Troi feels uncomfortable. Crusher tells Picard that the moss that she was growing under a desk has had a day's growth. She's certain a day has passed, despite what Data says. After a meeting senior staff investigate without letting Data know, and Crusher discovers a day has definitely passed.
Picard confronts Data with the evidence and sends him to Engineering for a diagnostic with Geordi, which is awkward. Troi feels weird, Worf escorts her to her quarters then she freaks out because she sees someone else looking out of her face in the mirror. Crusher finds that Worf's wrist has been broken and repaired recently, suggesting that they were conscious during the missing day. Picard and Geordi find that the recent scan of the planet is a doctored image, they confront Data who is still unhelpful. Picard tries to order the truth from Data, but the android still refuses and seems willing to face a court martial over this, though it sounds like he thinks he's protecting everyone with his actions. Picard turns the ship around and goes back to the mystery planet.
Green energy from the planet goes to Troi and then she goes to Data and tells him in an alien voice that the ship needs to be destroyed. Data and whatever is steering Troi go to the Bridge and Data reveals that Picard himself ordered Data not to say anything. Data explains that the beings on the planet hate outsiders, so they usually knock out anyone who comes near then send them far away, making them think they've just gone through a wormhole. Data is the first being not affected their knock-out method, and he woke up everyone else. The aliens wanted to destroy the ship and didn't believe Picard's promise that over a thousand people could keep them a secret. The alien used Troi to break Worf's wrist. Picard agreed to let the aliens mind-wipe everyone (which took about a day) and ordered Data never to tell them what happened. Picard decides that the only problem with his initial plan was that they left too many clues, so this time everyone is ordered to remove the clues and the aliens are allowed to mind-wipe them again, so that everyone's now lost two days. When they wake again Data tells them it's only been 30 seconds and suggests the wormhole is harmful, Picard believes him and the ship moves on.

Oh Captain My Captain
Picard's invited Guinan but not waited for her before starting so she has to go in on her own and is new to the whole thing. Picard explains the fun of a mystery to Guinan and while I think they're both good problem-solvers I suspect Picard enjoys an intellectual challenge whereas Guinan's happier with helping others, meaning this might not be the holodeck programme for her. Just when it looks like we might have to listen to Picard's bad US accent for more than five minutes Data intercedes.
It's cool that Picard immediately trusts Crusher. He asks questions about the moss to check the situation, but at no point does he doubt what Crusher is saying. Then he tries to give Data the benefit of the doubt, even though it's clear that he's either malfunctioning or deceiving them. Though Picard shouldn't have tried to out-logic Data, that's not going to work out. Picard also trusts Data enough to try and find out the truth rather than just do the logical, procedural thing and court-martial him, ruining his career.
Picard can decide that the entire ship should be mind wiped? By aliens who hate them for no reason and would be happier killing them? And he does this twice in as many days? I get that star ships are not meant to be democracies and that this episode highlights this to us without necessarily meaning to. I mean Star Fleet captains can be total dictators and make major decisions about the lives, bodies and minds of all on their ships, but I very much hope everyone on board knows that's the deal and gave consent in some way. While it's sensible of Picard to fix the clues to achieve a different outcome I question how much he's looked into the side-effects and health implications of mind wiping all these people. He's asked less questions about this than he did about Crusher's moss. 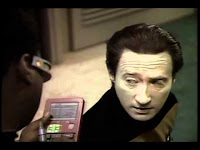 This episode would suggest that Data isn't very good at lying (which I'm not entirely sure I believe). The senior staff are all suspicious of Data, which must mean there's some serious intuition going on here because normally everyone just trusts Data (even strangers who've never met an android before, as demonstrated by the previous episode and various others). Picard didn't seem to think of this the first time, but I guess he's never asked Data to lie before. You would think that Data could use his knowledge of performance and fiction to figure out how to be more convincing. The second attempt suggests that it wouldn't have taken much for him to hide the truth. I guess this is an episode where Data is more in robot mode than becoming-a-person mode.
Data is so determined to follow Picard's orders that he continues to not tell Picard the truth even when it's likely that it could ruin his life. Though I guess he thinks he's not going to have any emotions about that if it happens. Data only reveals what he knows when the ship is in danger, which shows he's not just blindly following orders but is genuinely trying to protect everyone.

Doctor Doctor
Crusher's hobby is growing moss. It doesn't seem very cool, but I understand it's useful for medics to have a soothing hobby to de-stress from their work and this is hers. Plus Crusher has previously mentioned that her grandmother (or mother?) was a botanist, so I guess there's a family connection there. Crusher is really the one who discovers the mystery and does the investigating to prove her theory. This does mean there's some bio-babble, which to be fair is about as dull as the techno-babble, but it does have something to do with circadian rhythms, which I have heard of.

It's Not Easy Being Troi
First she has a terrible headache, then she has a terrifying moment when she sees another consciousness staring out of her face. Is that a memory? No one seems to investigate that, it's probably just there for heightening tension. Then an alien takes over her body and it turns out it's the second time it's happened in as many days. This kind of thing just seems to happen to Troi (and Data too, but he usually seems to have more choice about it). 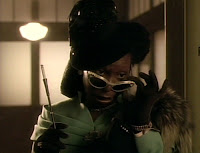 Guinan's Hat: jaunty, early-20th Century
During Guinan's first trip to the holodeck she has issues remembering her character background and is irritated by they obstructive receptionist (wow, these futuristic games). We do get to see that Guinan is even wearing confusing, period-appropriate hosiery. Then when the action starts Guinan tries to get a holo-gangster to open up while he's threatening them, then there's gunfire, they have to duck and Picard is keen to investigate the holo-murder. Guinan questions how Picard has fun and I see her point.


Staff Meetings: 3
1. Senior staff discuss what happened with the wormhole, Data suggests something very unlikely and Picard sends him away. Then the rest of the senior staff discuss whether they believe Data. No one is convinced and everyone wonders what really happened. Something could be wrong with Data. They investigate timeline but they don't want Data to know (which is smart after that time he hijacked the whole ship in about a minute.)
2. Picard presents Data with the evidence that it has been a day and sends a security offer to escort Data down to Engineering for diagnostics. Data is calm but not helpful.
3. Crusher shows the senior crew that Worf's wrist has been broken and fixed, suggesting they were conscious during the missing day. Worf points out that Data is one of the few people on the ship who could injure him. Picard, Riker, Crusher and Geordi discuss the idea that Data thinks he's protecting the ship and crew, which for some reasons suggests either that they lost something or got into a stalemate. Picard orders the ship back to the planet that started it all.

The End
After Picard orders a warning to be left before the Enterprise flies away there's a close-up on Data. Does he look a little satisfied? 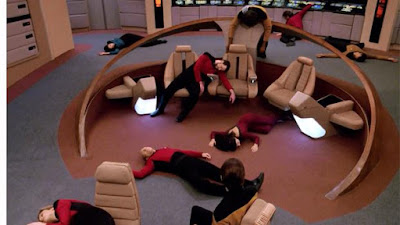