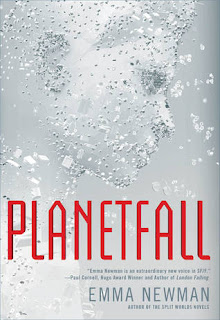 Ren lives in a community on a planet far from Earth, she looks after the printers which keep the settlement running. Ren is a very private person who is plagued by regrets and secrets and worries. When someone comes from outside the settlement it seems impossible, perhaps a miracle, it was assumed no one could survive outside the settlement. The new arrival is welcomed but his presence stirs up things Ren does want to think about, pulling her further into a deception. When he gets involved in her life she finds she's closer to the revelations she's long dreaded.

This is the first book in a sequence, with the second volume out later this year. Emma Newman also has a series of fantasy books (which I really should have blogged about by now, because they are excellent, but apparently haven't because I'm so slow at book blogging) The Split Worlds, which has a fourth volume also out later this year.


This is a very powerful story and I can't think that I've encountered much like it, though I don't read as much science fiction as I do fantasy. The story is told in first person POV by Ren, and as well as getting her thoughts on events as they're happening we also get her memories, meaning that a strong feeling of her is created throughout the book. From early on it's clear that Ren is a very private person, and not always comfortable with people. Ren's anxiety and worries make her sympathetic, and this aspect of her viewpoint is very important to the story. Everything is filtered through her perspective and we know that there are secrets and deceptions, but because Ren doesn't like to think about certain aspects of her life and past the reader is pulled through the book intrigued to find out not just what will happen next, but also what happened in the past. In fact there are a couple of places where a narrative sleight-of-hand is used so that something common for Ren is presented to the reader as a revelation without breaking the viewpoint. I won't go into more detail as that would spoil things. It's interesting that even in this future setting, when a lot of human problems have been overcome by technology, mental health problems are clearly still present and still seem to have some stigma attached.

The setting itself is very interesting. There's a lot of technology which seems to be logical advancements of what we have today, 3-D printing is major part of the story, as is a very personal form of social networking. There's also advances to healthcare and buildings. The book contains a limited population within one settlement, and so it's hard to know how these advancements have affected humanity as whole. In fact it sounds as though the situation on Earth wasn't great, and the background details we are given sound like many of today's worries, environmental disaster, overpopulation, restrictive governments. There's an element of the utopian in the main setting, but science fiction stories aren't ever good for utopias. Though this leads to the other fascinating part of the setting, which is the religious aspect. The reason for the settlement on a planet far distant from Earth has to do with vision, spirituality and the idea of God being an entity that can be found, that wants to be found. There's exploration of how faith can be important to people, how it can be used to both support and deceive. Ren's discomfort with the spiritual leanings of others in her may be familiar to some readers in a time when we're often encouraged to be skeptical.

As I said before the reader is pulled through the story by a growing sense of a potential disaster which mirrors some past disaster, both of which we want to learn more about. Details about the past inform the present and create a sense of dread. As you think you might have figured out how things will go you get a new detail that subtly changes the game. The story isn't very fast-paced to begin with, but there's a lot of interest in learning about Ren and her environment and her life, and as plot move on things get faster and there are a few emotional blows that are very effective. This is not a terrifically happy book, but it has humour and hope and peace within it. I could not have anticipated the ending, and it is something that could merit a lot of discussion about its implication, which is a good thing.
Posted by Catherine Hill at 19:57