Good Omens has been turned into a TV show, it is my favourite book. I talked about why I love it on this blog over 7 years ago, and I've reread it more since then.

I wasn't sure what I expected when I heard Good Omens was finally going to be a TV series, though Neil Gaiman being heavily involved felt positive. The casting of experienced actors David Tennant and Michael Sheen as the 2 main characters was hopeful. Other casting anouncements felt more mixed to me, but the trailers were encouraging.

I watched the series on Amazon Prime one episode at a time, we don't do much binge-watching anymore. I had intended to reread the book before the TV series started, but I don't read as fast as I used to, so I was still reading the end as we watched the beginning, meaning I quoted a long with a lot of it.

I really enjoyed it. I missed some stuff that was omitted, but a lot more of the original text was in the show than I'd expected. I also really enjoyed a lot of the additions. The whole thing felt very in the spirit of the book, so that's good.

I have a lot more thoughts. I have bullet pointed them. 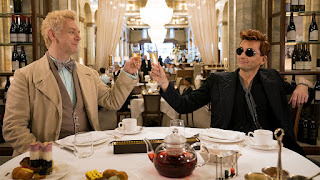 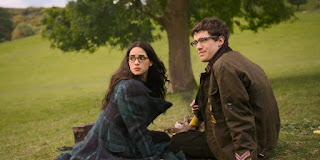 Horsemen (and Bikers) of the Apocalypse

Many Diuerse Wonders and Precepts for the Wife

Is it weird that I used my husband's (hardback and unbattered) copy of Good Omens to check some stuff for this post and was disconcerted by the typeface and formatting being different.

Email ThisBlogThis!Share to TwitterShare to FacebookShare to Pinterest
Labels: books, television, Why I Love