Why I Love Good Omens

I was first given Good Omens for my 16th birthday. 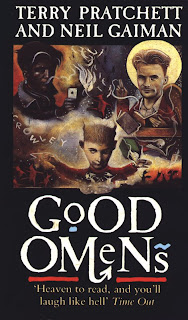 My father says he first read Lord of the Rings when he was 21 and he has reread it regularly ever since then, I can think of several occasions from my when I saw him reading it.* That is what Good Omens is like for me. I have read and reread it so many times that the book is looking distinctly worn. Were it on the shelf at work I'm sure my boss would consider selling it and getting a better looking copy.

I love those moments that I read then immediately reread, sometimes numerous times, just to play the dialogue and expressions and reactions through in my mind until they're as clear as they can be, as though I'm actually watching or directing them. I pretty much only do this with dialogue between main characters, usually when there's humour behind the conversation. There are quite a lot of moments in Good Omens that I do this with, especially conversations between Crowley and Aziraphale. In fact I'd pretty much got a scene-by-scene of their entire drunken conversation in my head before I was in my twenties.

I suspect reading Good Omens is partly why I like Queen.
At 16 I still liked a lot of mainstream music (later working in a clothes shop, and influence from the heavier tastes of friends, would spark a growing appreciation of rock) but I was rarely passionate about music. I knew Dad liked Queen and had heard several of their songs, but we were not a very musical household and it had mostly been in the background. Good Omens was the first book I've read that had a soundtrack. The references to the Greatest Hits of Queen are often sarcastic and at first I thought that the authors didn't like the band. Then I realised that the lyric quotes and the jokes were a sign of appreciation. When I heard certain Queen songs I associated them with Good Omens and though I'm sure Queen would have been a part of my developing musical tastes anyway, I'm sure that association helped. When I hear that bit in 'Bohemian Rhapsody' I still often think of Crowley giving a strangled scream and punching his foot to the accelerator of the Bentley just as the song seems to explode.

Good Omens was in some ways my bridge from Pratchett to Gaiman.
When I first read Good Omens I'd read a lot of Discworld (though being a teenager -and a fairly innocent one- I didn't get all the jokes). I think I had read Neverwhere at that point and Neil Gaiman had been recommended to me by a friend from the Youth Theatre group I attended, as a good author who co-wrote with Terry Pratchett. I remember making a list of things to buy in town and borrow from the city library:
Never ware
Neil Gaiman
socks
I needed to buy some socks and I had never seen Neverwhere written down. I remember this because later that day my sister saw the note and assumed Neil Gaiman was a designer/brand of socks that I'd been warned against.
Initially I noticed all the Pratchetty bits of Good Omens -the footnotes, the way Death spoke, some of the description, characterisation and jokes, which chimed with what I'd been reading in Discworld. After a few years, during which I read Sandman, American Gods, Stardust and various short stories, I reread Good Omens and noticed the Gaiman-ness -the GK Chesterton references, the speculations about the nature of the divine/demonic, some of the description, characterisation and jokes.

I like that when rereading I still pick up on things I missed before. This doesn't happen every time but it happens enough that I'm still surprised and delighted. Some of it was jokes I didn't get at first due to still being young and innocent (the Coitus Interruptus Award for telemarketers was suddenly amusing - although I later wondered how they knew), others were references to things I hadn't experienced or didn't entirely get until they had a chance to sink in and become ingrained in my worldview.

These are all reasons why I love Good Omens and if you don't really know what I'm talking about I suggest you find a copy and find out. You won't regret it.

* I must say I do not have much love for Lord of the Rings, though I can appreciate its importance to the genre. My dad read The Hobbit to me when I was 8 and I remember enjoying that -though I don't seem to recall the ending, so I think we must have got interrupted. I tried to read LotR when I was 15 and got most of the way through Fellowship but at that point the films were coming out so it just easier to watch.
Posted by Catherine Hill at 13:57

Email ThisBlogThis!Share to TwitterShare to FacebookShare to Pinterest
Labels: books, Why I Love