I wouldn't particularly describe myself as an anime fan.
I've watched and enjoyed a few anime series and films, and I like Studio Ghibli. I know many people who are far more interested in, and knowledgeable about, anime than me, so don't feel I can claim a 'fan' title.

So, as an interested not-quite-fan I just want to say that Summer Wars is absolutely amazing.
It really is an excellent film and I'm definitely putting it on my Christmas list. 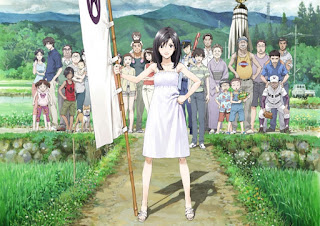 It's about Kenji, a high school maths genius who agrees to accompany Natsuki to her great-Grandmother's 90th birthday celebrations as a favour. Once in the busy bustle of her family's ancestral home he discovers that Natsuki has told everyone he is her fiance. Shy, good-natured Kenji goes along with it and finds himself overwhelemed but delighted by Natsuki's big, noisy family. Meanwhile there's trouble in Oz (the colourful cyber-world that stands in place of the internet within the setting of the film) as a dangerous hacker is causing mayhem on an international scale.

So much about this film was good. I liked the way Oz was designed and shown on screen, it was realistic and understandable as an online 'space' where people can completely design and fully use their own avatar. Showing a virtual world is something that can best be done in animation and it's clear the makes of this film knew exactly what they were going for. As a virtual platform that combines chat, gaming,shopping, learning and infrastructure it is a wonderfully varied and flexible setting for animators to design and work with. The action switches between the real-world Japanese setting and the bright, fantastical online world - where the consequences and stakes are high enough to be vital to the offline world as well.

The characters were great. Kenji and Natsuki and her big family all felt very realistic. I loved the stern but loving figure of the great-Grandmother, the aunts/cousins who were doing all the cooking and organising. I really felt for the characters, both those primarily involved in the plot and those on the periphery, who still had their own personalities and concerns. The family as a group felt big and warm and comfortable and I found that it reminded me of some of the best families in Diana Wynne Jones books.

The storyline was interesting and though some plot lines were foreseeable other bits were unexpected and the whole thing was full of emotion. The way it encompassed the massive and international down to the personal and intimate all in one story was excellent. There were a couple of times -during sad bits- when I was truly close to tears, but there was also plenty of warm humour. Then at the end I felt such a strong rush of emotions. It's good when you watch something like that.

I strongly recommend this film. Even if you don't think of yourself as an anime fan it's a wonderful piece of storytelling.

Various anime I've seen have convinced me that if the apocalypse involves either small, cute, fluffy creatures or big, gestalt monsters the Japanese will be the only nation prepared for it.
Posted by Catherine Hill at 19:09