City of Dreams & Nightmare by Ian Whates
I'd been aware of this book for a while and finally got round to reading it because I was going to see Ian Whates talk at a local event. Sometimes it can take me a while to read a book, even if I have seen it a few times, because there are so many other books. This is a very slight downside of working in a library.
Anyway... 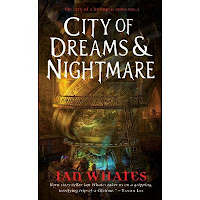 The book is an urban fantasy (as may be obvious from the title), but one with science fictional sensibilities as well. It's set in Thaiburly, a city carved into a mountain. Tom is a street-nick from the City Below, a cavern underneath the main city through which flows the river Thaiss, it has the port and most of slums and gangs. At the start of the book Tom is climbing up the Rows that make up the rest of the city, with the conditions becoming more luxurious and wealthy the higher he goes. Most of the way up he witnesses something dreadful and flees back down. Once in the City Below he must travel back to familiar territory with Kat, a young woman with a dangerous past. The other main character is Tylus a slightly unfortunate member of the elite Kite Guard, who is sent down to the City Below on the trail of a street-nick lad who's been accused of murder. Though Tylus's time as a Kite Guard has been marred by errors and awkwardness he is inflated by what seems like a special promotion and his journey to the City Below gives him the opportunity to prove himself.

The setting is very well realised and the supernatural is clear from very early on. Although initially the book seems more like a fantasy there are definite science fictional elements, especially strange, advanced tech, that become more important as the plot progresses. I enjoyed the mysteries and suspense in the plot and found the characters engaging.
Having spoken to the author while I was reading I found I had extra insight into some of the final scenes, which was pretty cool and added extra depth to my reading experience.


There is No Dog by Meg Rosoff

This interesting teen book asks what if God were a selfish, lazy 16 year old boy? Bob got the job of God because no one else wanted it, Earth wasn't a glamourous project and no one really knew what to do with it. Bob had some really interesring ideas to start with, but then he kind of lost interest in the whole creation, well except for the pretty girls. And Bob has just noticed assistant zoo-keeper Lucy.
I've not read a Meg Rosoff book before -not sure why- so I don't know how it compares to her other work. I found the premise really interesting. The characters were mostly likeable, and those that weren't likeable were understandable. The interactions between the cast of characters, which seemed to increase throughout the book, worked well. The plot threads were set up one and came together by the end, and yet...
I found myself vaguely dissatisfied as I was reading. Something about the book didn't quite work for me. Possibly I had different expectations of it, though I couldn't tell you what they were. It was an OK read, but I found that the story soon became stuffed with characters and plot thread. I didn't quite know how the things would come together and I found that my bemusement kept me from properly immersing myself in the book.
I think this was a good, interesting idea and the bulk of the story was well done, but I didn't like it as much as I had thought I would. I would recommend this to the right person (my job requires giving recommendations for all sorts of books whether I've liked -or even read- them) but it's not a personal favourite.
Posted by Catherine Hill at 22:13