The Hundred Thousand Kingdoms by N. K. Jemisin
This was an interesting and absorbing read. 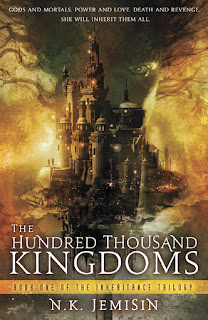 This secondary world fantasy is set in a world where gods are trapped in human form and a powerful, tyrannical family uses them as weapons to rule the world. The story is told from the point of view of Yeine, a mixed-race woman who is summoned to the palace of her maternal grandfather after her mother's death. Despite having been a tribal leader in her supposedly-barbaric northern home Yeine is unprepared for the cruelty and scheming of her mother's family and their divine servants.
The book addresses an issue that has been around since ancient times (and is exemplified by the Iliad). How do you create characters that are powerful gods and yet are understandable to your readers? Jemisin's gods are trapped in human form as punishment after the Gods' War. They are massively powerful beings, but not only are they trapped in human form, they are slaves to the family who rule the world in the name of their enemy.
Yeine is not an ingenue, but she is understandably inexperienced and must keep herself safe in a dangerous new world, while trying to find out the truth about the life and death of her beloved but aloof mother. She was an easy character to identify with and her behaviour was understandable if not always particularly smart.

When You Reach Me by Rebecca Stead
This excellent book won the Newberry Medal, and I'm not surprised. 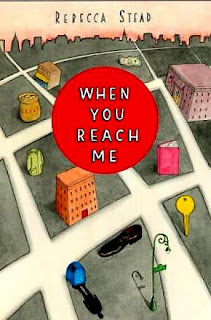 The story is set in 1979 and is told from the point of view of a twelve year old girl called Miranda. At first Miranda is writing about her life to a mysterious correspondent. Miranda details her family relationships as they prepare for her mother to go on a TV game show. There's also a lot about Miranda's friends at school, her closest and oldest friend Sal has distanced himself from her for the first time since they were toddlers and Miranda must branch out and make new friends. The ordinary parts of the story work well because Miranda's voice is honest and opinionated and easy to understand and relate to.

Miranda starts receiving cryptic notes, and odd things happen. There's the Laughing Man, a tramp who lives under a mailbox and shouts out strange things. Someone steals the spare key to Miranda's apartment, but only takes a shoe. Miranda and some school friends get a job making sandwiches for Jimmy, the idiosyncratic sandwich shop owner. There's Marcus an odd, unsociable but brilliantly intelligent kid who discusses the mechanics of time travel with a baffled Miranda.

The mystery plotline initially reminded me of other young adult mysteries I've read, strange messages are a popular focal point for such books. As well as enjoying the character I found that the plot hooked me and reeled me in. It was soon apparent that this was a very different sort of mysteries to others I had read and along with Miranda I was desperate to find out the truth.
I shall be strongly recommending this story to any young people who want an interesting read.
Posted by Catherine Hill at 22:52