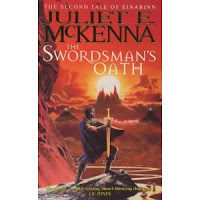 This is the second book in the Tales of Einarinn and I continue to be impressed. My views on the first book The Thief's Gamble can be found in a post from early September.

Like the previous volume this book is told mostly from the viewpoint of one character, with the deeds of other characters in other places told in third person. The narrator character is Ryshad, a character who appeared in the previous book. I liked being able to see the same characters again from Ryshad's point of view, it gives them all more depth. It was also interesting to see Livak from the view point of a friend and lover, as I'd experienced many of the events of the previous book from inside her head.

The setting -already a realistic and detailed world- is expanded as the action moves from the main continent (which is akin to early-modern Europe) to the Aldabrashin Archipelago. The Archipelago has more of an Eastern feel, though it's different enough to our own world that it felt original, it was certainly different from other fantasy settings.
I also liked that parts of the book took place in a period long before current adventure. As a history fan I liked seeing the juxtaposition of two time periods, and I'm impressed by McKenna's craft that she was able to create and convincingly convey such a sense of history in an entirely fictional setting.

The plot took a few unexpected twists and turns (I certainly never expected the Aldabrashin section), but never did the sequence of events feel contrived - except where powerful characters were pulling strings, of course.

I've already ordered the next book, and I'm looking forward to reading that as well.


I've gotten a bit slow at writing reviews again, my apologies. I've got a few posts that I want to do and I will try and get them done before December arrives and buries me under Christmas-related stuff.
Posted by Catherine Hill at 15:33