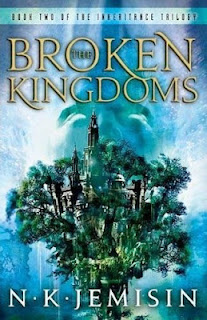 This sequel to The Hundred Thousand Kingdoms is set ten years later. I'll try to avoid major plot spoilers for the first book.
Oree Shoth is a blind artist who can see magic. She left her home country and lives in the city of Shadow, where the streets are vibrant with magic because of all the godlings (lesser gods) that live there. Oree charitably takes in a silent man she finds on the street, her new lodger seems to be totally mortal but he resurrects whenever he dies -something that happens quite often as he doesn't take any care. After Oree discovers the body of a murdered godling she must abandon the independent life she has crafted for herself to fins sanctuary with her former lover. She is kidnapped and dragged into a conspiracy against the powerful ruling family and the gods themselves.

Where The Hundred Thousand Kingdoms was all about the machinations of the world's ruling family and the three most powerful gods, Broken Kingdoms is set at street level. Oree is blind and scrapes a living in the city underneath the World Tree (which was created at the end of the last book) and has mundane concerns like rent, food, and whether she should contact her ex-lover.
The city of Shadow is physically underneath the palace featured in the first book. The bustling urban setting is very different to the luxurious palace of the ruling Arameri family. It's cosmopolitan and full of people from all over the world, many of them pilgrims. Since the previous book the godlings have once again entered the mortal realm again, but they're only allowed live in Shadow for fear that they will create chaos in the wider world. Oree's lover Madding is also a godling, and he provides insight into relations between mortals and godlings in this new world.
Despite her low social status Oree is not an ordinary protagonist, her sense of independence is very strong and she values her life as she has to work so hard for it. N. K. Jemisin has skillfully written a book from the point of view of a blind character, so most of what Oree witnesses is told through sound, movement, feel and smell. It doesn't detract from the description and adds a layer of interest to the plot and characterisation. As Oree can only 'see' magic any visuals mentioned are likely to be significant and vibrant and have a greater impact on the descriptions than they normally might.
The plot starts with Oree pulled into a murder investigation, then she is faced with increasing levels of danger as she discovers more about the secret history of the gods. She is kidnapped by a dangerous group of fanatics who seek to use her as a weapon, and she must find out more about her unusual powers and her family background. It's clear that there is more to Oree than she suspects, the mystery of her origin and the lunacy she has been pulled into really kept me reading. The implications of the plot are not as wide ranging as the first book, but plant the seeds for greater change to the world in the next volume.

The Double Shadow by Sally Gardner 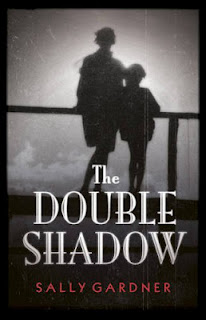 Amaryllis Reuben does not act as a proper young lady should. When she is expelled from boarding school after running off for a night in London her father is at his wits end. Arnold Reuben, a very rich man obsessed with memories and the past, doesn't understand the woman his daughter is becoming and misses the affectionate little girl she used to be. Amaryllis is forced to spend her time with Ezra, the cook's son, and despite initial antagonism between them they become close. Events take a turn for the disastrous as Arnold Reuben's plans for his daughter go awry on her seventeenth birthday and several people from the house and estate disappear. As the Second World War changes everyone's lives and Ezra gets involved in a rescue mission to recover those who disappeared.

This young adult book is a fascinating read, combining a historical setting with strange, science fictional elements. There is a fairly large cast of characters, both adults and young people, most of whom live on or near the Warlock Hall estate owned by Arnold Reuben. As memories are a major part of the plot the characters are often described through flashbacks to their younger days, or else their attitudes towards the past. Arnold Reuben is both driven by his desire to live in the past, whereas shell-shocked solider Mr Pascoe is trapped by hallucinations of his hellish time at the Front. Main character Amaryllis initially appears to be a bit of a spoiled brat, but though she acts badly towards other characters it's clear that she's starved for affection. Ezra is much more likeable, a cook's son who is keen to learn and becomes a dedicated and brave agent in the Second World War.
There are various strong themes and images that repeat across the plot and the years in the book, tying parts of the story together and sometimes linking generations. The white tiger is an animal and an image that reoccurs regularly in different places. There's a character called Tommy who has a mouse that he carries around with him, I found this adorable as I personally think mice are very cute. It turns out that the mouse was a present from his father who also liked mice. Cinema (meaning both the films themselves and the building where people go to watch them) is very important to the book. Much of the plot revolves around the mysterious picture palace that Arnold Reuben has invented and the memory recordings he and his assistant Silas take. There were a few bits that made me think of Life on Mars by David Bowie, especially the first verse, though that association may only occur to me.
I intend to recommend this book to the members of the teenage reading group at work.
Posted by Catherine Hill at 21:46