Why I Love Batman TAS

For Christmas I was given the first 2 series of Batman: the Animated Series.
That's 20 hours of Batman cartoons. 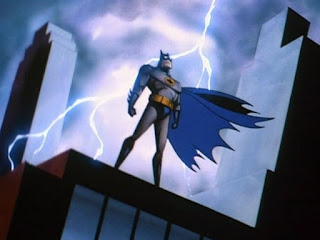 I loved watching this series when I was younger. It was the main thing on Cartoon Network that wasn't all brightly coloured and wacky (well the Joker was, but you really weren't supposed to identity with him). It felt more grown up and intriguing than the other cartoons. I remember that a lot of the episodes had plots that felt serious, but were still entertaining. Looking back it amazes me that they weren't much more than 20 minutes long.

The series is, for me, the definitive version of Batman. It introduced me to Gotham, and for me the city will always be dark and Gothic and largely art deco.
When I think of the Joker it's not Jack Nicholson or Heath Ledger that first comes to mind, it's the pointy-haired Clown Prince of Crime voiced by Mark Hamill. I know more about Batman's rogue gallery than any other big name superhero. As well as being familiar with the reoccurring villains (Joker, Two-Face, Penguin, Poison Ivy, etc.) there were a few of the one-off characters that stick in my mind (like that woman who was stuck in the body of a little girl & the Mad Hatter guy).

Watching the DVDs again is an exercise in nostalgia. This theme tune is like an old friend.