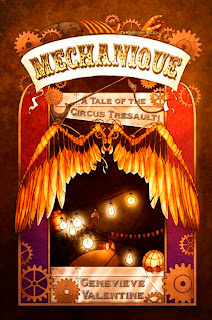 A travelling circus of mechanical marvels journeys through a war-torn land. The Circus Tresaulti's performers thrill the crowds from the cities, giving them bright lights and wonder for a night or two before moving on. Boss, the indisputable and powerful ringmaster, leads her ragtag family on their circuitous route, staying away from danger and Government men wherever possible. Long-held tensions within the circus threaten its existence when external danger finally catches up with Boss.

This is a slim novel, one that does not waste words. The story is told in the manner of a spotlight being shone, picking up those details that are important and significant, expertly guiding the audience's attention to where it needs to be. At first the storytelling is not linear, it tells of the circus folk, how they came to join the circus and the significant events in the life of the circus. The viewpoint is fluid and shifts from person to person, the writing making it clear whose eyes we are seeing through, and sometimes simply allowing us to witness. The closest thing to a narrative character is Little George, whose young life was shaped by Boss and the circus, but who is in many ways naive and innocent of the nature of his home and family.
The characters are well done, their personalities and motives conveyed through glances and brief words and occasional, yet significant action. Their strangeness is highlighted, although what little we see of -for want of a better word- normality in this world is a harsh, grey thing.
Technically I suppose this novel would count as steam punk, or some kind of 'punk. Metal is fused with human bodies to create the impossible performers. However there is nothing pulpy or gung-ho about this story; though there is action and bravery, peril and magic, there is an intimacy to the portrayal of the circus, the performers and their relations. The magic of the story remains an enigma, it is not meant to be closely examined. The rescue mission in the final third is exciting, but the change to status and relationships within circus hierarchy is in many ways the important part.


I got this book at Eastercon this year, where I was happy to meet the author and get my new copy of Mechanique signed.
The downside of meeting people you respect/admire at conventions (especially in the evenings or on the last morning) is that you may well be drunk, tired or a combination of both, which in my case leads to a tendency to babble.
Posted by Catherine Hill at 15:51