Episode: s1, ep 9
The Ferengi are back and giving Picard headaches as he relives a past event, at least they aren't all up to something this time.


What Happens
A Ferengi Captain offers Picard a gift. The Ferengi beam aboard the Enterprise where they hail Picard as the victor of a battle he knows nothing about. It turns out that 9 years previously Picard destroyed an unknown vessel that attacked his old ship without provocation, he did this with some fancy flying now called the Picard Manoeuvre. The vessel was a Ferengi ship and now these Ferengi offer Picard his old, abandoned ship, the Stargazer, for free. 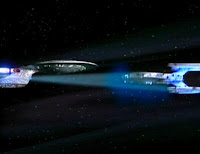 Picard, who has been suffering headaches, beams over to his old ship and is flooded with memories. His old logs are discovered, including one in which Picard confesses to destroying the Ferengi vessel for no reason. Riker doesn’t believe it and investigates. Picard’s headaches get worse and are caused by a glowing red sphere used by the Ferengi Captain, who is avenging his son, killed by Picard’s actions 9 years before. Wesley figures out the Ferengi are behind it, but not before Picard is back onboard the Stargazer reliving the “battle” and pulling a Picard Manoeuvre on the Enterprise. The headache sphere is destroyed, the Enterprise is saved by the tractor beam and the Ferengi Captain is deposed by his First Officer.

Riker: lover, adventurer, middle-management
Riker is the investigator in this episode, determined to prove Picard’s innocence. Of course his investigation mostly involves bothering and taunting the Ferengi First Officer.
Of course Wesley steals the glory by figuring out the Ferengi are doing it. Riker gets Picard to destroy the device, even though he has no idea whether that will harm him, luckily it doesn’t.
The Boy
Wesley is better than everyone else, again. Sigh.* He boosts the long range scanners in a way even Data is unaware of and is the first to detect the approaching Stargazer. He races to the bridge to pre-empt the Computer’s warning (and presumably to show off). Picard rightly ticks him off for not communicating what he knew over comms and wasting time.
Wesley notices frequencies coming from the Ferengi ship that match the frequencies in Picard’s brain scan, leading to the discovery of the red glowy headache sphere planted in the Captain’s quarters.
Wesley is made extra irritating by smugly saying "Hah. Adults" to himself after he's figured it all out. Basically saying to all the adults watching that they suck and don't compare to a precocious teen. Now this message is fine on kids TV, but is horribly misguided here.

Stage Skills
Picard is gripped by headaches, flashbacks and dreams about his experience on the Stargazer. At one point the Captain is sure he is losing his mind and has an intensely dramatic monologue on a low lit set. If you’ve hired an actor with Shakespearean stage experience you might as well use those skills.

1. Picard describes the circumstances of the supposed battle in the lounge, including the birth of the Picard Manoeuvre.
2. Picard and Riker discuss the faked old log entry and what Riker can do to investigate. 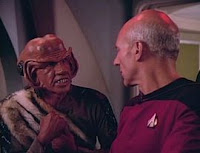 Something Is Very Wrong
While the Federation seems to be particularly distrustful of the Ferengi for reasons we don’t really see, it’s clear something is amiss when the Ferengi Captain gives Picard the Stargazer for free. Even the other Ferengi officers are aghast, where’s the profit?
When the Captain’s plan is uncovered he is relived of command, putting revenge above profit is not acceptable, plus headache spheres are forbidden.

Future is Better
In the 24th Century people don't have headaches anymore, so Beverly tells Picard. The common cold has also been cured.

The End
The episode ends with a disorientated Picard on the Stargazer's bridge declaiming against revenge before asking to be beamed home. 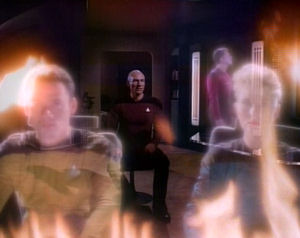 * While poking about online for pictures I came across a great review of this very episode done by Wil Wheaton. As well as being humorous and providing interesting behind the scenes insights, there's a section towards the end where he talks about why Wesley came across so annoying, clearly the man gets it. This is part of why geekdom has embraced him even though he was the face of a widely hated character.
Posted by Catherine Hill at 16:36