What Happens
This episode made me think of Hotel California by The Eagles, so that's how I decided to write it up.
Please note this is not meant to actually be sung (though you can try if you like), parts of it don't rhyme or scan.

On a dark unmapped solar system, winds three hundred and twelve miles per second
Smell of frozen methane, rising up through the air 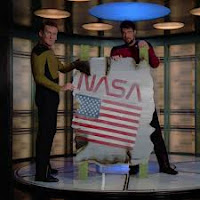 Up ahead in the distance, I saw ancient NASA debris
I analysed it and I got curious
I sent an away team
In the dark revolved a doorway
I heard no comms from the ship
And I was thinking to myself,
"There's no danger, this might be a nice trip"

Front desk claimed it was Earth, it should be Theta Nine
The people all around weren't real
They're just passing time

His mind is cliche-twisted, he got the bad novel blues
He encountered aliens who didn't have a clue
How the bellhop bugs the desk clerk, such bad dialogue
The plot is so predictable, no one is agog

So I called up the Captain,
He said "What's your situation?"
I said, "We're trapped in a structure resembling twentieth century Earth."
And still those voices are calling from far away,
Wanting regular status reports
To help us end our stay

Bad novel on the beside
Its why all this is here
The astronaut welcomed death, the situation is clear
And down in the lobby
The foolish bellhop is shot
Surely the melodrama's over now?
Oh no, turns out it's not. 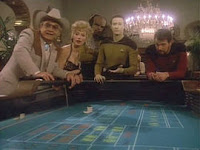 We plan to leave by winning
The android fixed the dice

The cowboy lost his money but
It turned out all right
"Relax, " I said to the desk clerk
"We're buying the hotel
Now we have to beam away
But we wish you all well"

That may have been incomprehensible (especially if you don't know the episode), but I figure the original song is pretty weird too.
In summary: the Enterprise finds NASA debris orbiting an unexplored, inhospitable planet. Riker, Data and Worf beam down to a structure inside a pocket of breathable air and find a 1930s US casino called the Hotel Royale, populated by period-appropriate simulations. Unable to leave, they investigate and discover the remains of an astronaut who left Earth in 2037. His diary reveals that he was left there by aliens who inadvertently destroyed his ship, and then created the simulation in the belief that a very bad novel was a guide to his civilisation. In order to leave, the away team take on roles from the novel (or something like that), win huge amounts of money and buy the hotel. 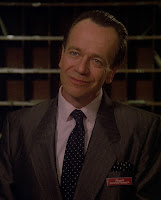 Guest star: Sam Anderson
I knew the desk clerk was familiar as soon as I saw him. Sam Anderson has had parts in loads of US TV
shows, several of which I've seen. For me he's most familiar as the Fonzi-loving doctor who delivers Pheobe's triplets in the 100th episode of Friends.


Oh Captain, My Captain
Picard gives Riker a short, unasked-for lecture on Fermat's last theorem. He likes to look at it every so often and tries to figure it out as a hobby, or possibly as an exercise in humility. Sadly, it seems the work of Andrews Wiles (who published a proof of the theorem in 1995) seems to have been utterly lost by the 23rd century. Probably due to all the nuclear problems that destroyed all the knowledge accumulated during the 1990s and the next few decades.
Picard reads Hotel Royale, the bad novel the simulation is based on, and gives info to the away team. It's clearly not as good as Dixon Hill.

Riker: lover, adventurer, middle-management
Riker is pretty decisive and take-charge in this episode, he's the driving force of the away team. He's the one who uses info from Picard to come up with an escape plan. It's a strange plan, and the fact that it works makes absolutely no sense. Then again they all get away safely, so I suppose Riker feels pretty good about himself. His final line makes it clear that he didn't understand what was going on either. (see The End) 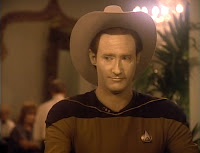 Data meets a straight-talking person from the past, which is always amusing, or at least weird. Data gambles with a rich Texan and an unlucky blonde woman that the Texan seems to be preying on.
At the end of the episode Data's gambling skills are needed and rather than figuring out probabilities or counting cards he plays dice, even though there's "a certain degree of random fortune involved". Data can tell that the dice are loaded, so he uses his strength to alter the weight and blithely cheats his way to millions, as far as I can tell anyway. I'm not sure why the management didn't change the dice or ban Data from the table before he broke the bank so hard there was not enough money in the building.

Klingon Warrior
Worf is on the away team, he doesn't do much. Early on he tries phasering through the wall, which is good, lateral thinking, though it doesn't work. Otherwise he says very little and no one comments on his appearance, which seems odd in a 1930s setting. It's like they don't know what to do with him in this episode.

Counsellor Pointless
While the comms are down Troi's connection to Riker is the only contact with the away team. When he first visits the casino she can tell that Riker feels safe and is amused. After the away team realised they can't leave she senses he's tense and trapped. It seems Troi's abilities can be pretty useful, but only where Riker is concerned. It's a niche skill set.


Staff Meetings: 3
1. Riker comes to tell Picard that they've discovered weird debris. Picard sidetracks him with a brief lecture on Fermat.
2. Data reports to Picard, Riker and Troi about the NASA debris. It's from mid-twenty first century Earth, even though no ship from that time could've gotten so far. It looks as though it was hit by a modern disintegrating weapon.
3. Picard, Geordi and Pulaski tell the away team about their plan to slice open the envelope holding the air in and beam them out. Due to the atmosphere on the planet they'd freeze in 12 seconds, but could theoretically be revived. Riker decides to figure it out for himself.

The Flaw
The end of the episode doesn't make sense. Picard tells Riker that after the climactic shooting the hotel is bought by foreign investors for 12.5million US Dollars, and the investors leave. I'm a bit confused by a novel that deals with thugs, dames, a tragic love affair and a murder conspiracy subplot (most of which we don't see) ending on a description of a financial transaction that takes place after the narrative character has left. Though I suppose the point is that the novel is bad.
Riker decides that they can only leave if they take on the role of the foreign investors, because the novel states that the investors leave. Firstly, I don't understand why the investors aren't already part of the simulation since they definitely feature in the novel. Secondly, as it's not real why doesn't Riker just say that he's going to buy the hotel? After Data does the gambling Riker simply proclaims they've bought it, without any paperwork or anything, he could have done that sooner. Thirdly, the desk clerk identifies them as "the foreign investors" after Riker mentions purchase price of the hotel. This seems pretty meta and therefore not the sort of thing the character should know, unless he was expecting nameless foreign investors, but there's no indication of that anywhere else. I definitely think that there are lines missing here. 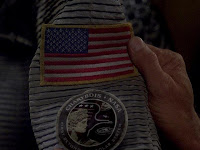 The dead astronaut's uniform has an American flag with 52 stars. Apparently Riker knows his US history
and this means it's from somewhere between 2033 and 2079. What were the other two states? Puerto Rico? Guam? Scotland?
Record checking reveals that the dead astronaut was on a ship called the Charybdis,* a third unsuccessful manned attempt to leave the solar system. I somehow doubt NASA is going to get round to even one in the next twenty four years.

Space Trumpets
I like that whenever the hot-headed bellhop talks to the desk clerk about Mickey D and Rita (the woman we never see) the music ramps up and becomes more swingin'. It's a audio cue that what we're seeing is part of the main plot of the novel. That and the terribly melodramatic dialogue.

Death by Space Misadventure
Colonel Stephen Richey lost his entire crew (number unknown) to the mystery aliens. He was taken further than man had ever been (at that point) and lived out his last days alone in hellish recreation of a truly dreadful novel. He welcomed death when it came.
Who wants to be an astronaut?

The End
On his return Riker goes to see Picard and talks about how weird it all was. His last line is "None of it makes any sense." This is a pretty good description of the episode. Then Picard comments that's it's a puzzle that might never but solved, like Fermat's theorem, which has been solved thus adding to the nonsensical nature of this episode. 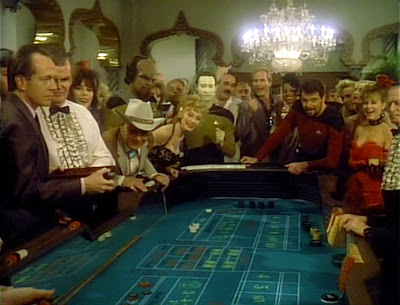 * There seems to be a trend for giving space vessels Classical names. Unfortunately the people who choose these names need to do a bit of research as so often fictional ships have names of ill omen.** In this case Charybdis was a mythical sea monster who was pretty much a whirlpool, though she might have been a beautiful nymph who was punished. Getting unwillingly sucked into somewhere you never escape from is a pretty obvious metaphor.
I do like the little picture of a Classical-looking statue and a whirlpool on the astronaut's badge, nice touch.

**In Sunshine I wasn't surprised that a ship called Icarus had done badly when sent to the sun. In fact I suspect that was the reason it did badly (that and the crazy sunburnt guy, obviously).
Posted by Catherine Hill at 21:15