Picard is called to the Neutral Zone to help his friend Captain Varley with a serious malfunction on the Enterprise's sister ship, the Yamato . There's brief communication, then the Yamato explodes. A Romulan ship appears and Picard asks what they're doing in the Neutral Zone, the Romulan Captain returns the question. Picard says he'll stay until he's sure the Romulans didn't cause the explosion. Geordi reports that the Yamato exploded due to an internal problem. Picard reviews Varley's logs and discovers that his friend was tracing an ancient civilisation in order to keep advanced tech from the Romulans. The Yamato encountered a strange probe at an ancient planet, but couldn't do more as they were plagued by malfunctions. Varley wanted Picard to carry on the mission.
Picard takes the Enterprise to the planet, even though Geordi is still checking for explosive design flaws and it goes against what he told the Romulans. Minor system errors cause various problems. At the planet a probe is sent to the ship, the Captain intends to catch it. Geordi has to run to the Bridge to tell them to destroy the probe. He's discovered that the Yamato got a virus from the probe, which spread to the Enterprise via the Yamato's logs. Picard believes that since the problem started on the planet the answer must be there too, he goes to the planet with Worf and Data. 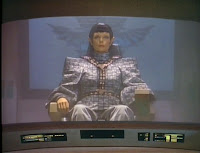 The Romulan ship reappears and asks why they've gone further into the Neutral Zone. It looks as though they're going to attack, but it turns out they have the same system issues, suggesting they tapped into the Yamato's files. Riker orders the shields raised, cutting off the away team. In an underground facility Data partially translates the language on the control panels and accidentally creates a gateway that leads to various places, including the Enterprise. Worf suggests the tech could be a weapon, though Picard senses that the inhabitants weren't hostile. Data tries to tap into the power source and gets infected by the virus. Pic tells Worf to take Data through the gate when the Enterprise cycles round again. Data slowly guides Picard through self-destruct instructions. Worf carries Data to the Enterprise and Picard sets a countdown. Data seems to die then revives, giving Geordi the answer to the system errors. Picard goes through the gate and arrives on the Romulan ship, where they believe he has sabotaged their ship because the auto-destruct is stuck on. With the Enterprise systems fixed O'Brien beams Picard back. Riker sends the Romulans instructions to fix their ship.

At first Picard breaches the Neutral Zone on the request of an old friend. Then it turns out there's an archaeological mystery. This is the first episode where we discover the Captain's weakness for archaeological mysteries, something he obviously shared with his friend Captain Varley. Once Picard learns the nature of the situation he's keen to investigate, even though the Romulans told them not to go further into the Neutral Zone and Geordi can't guarantee the ship won't explode.
The probe from the planet (which looked like a shiny, blue moon with force lightning) was so obviously the problem. I'm really surprised Varley didn't realise it, but by that point he was blinded by ancient mysteries.

Riker: lover, adventurer, middle-management
Riker doesn't want Picard to go on the away mission, it's clear they've had this heated discussion before. Picard won't listen to Riker's perfectly understandable concerns. He said the first time they met that he saw it as his duty to protect his captain, Picard doesn't make it easy. The Captain claims he has specialist knowledge necessary for the mission, not that it matters because it's not as though Riker can pull rank here. I think that's part of the tension. Varley didn't listen to his first officer either, and now they're all dead.
Riker is left to deal with the Romulan's perfectly understandable suspicion and various intermittent system failures. When Troi says the crew would benefit from busy work to relieve their tension Riker suggests they plan for evacuation, which I'm sure made everyone feel a lot calmer. 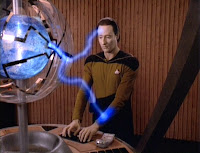 On the planet Data recreates the ancient language to operate the tech. He gets infected by the virus, which isn't surprising, though you'd have thought Data might have better virus protection. The virus attempts to rewire his systems, leading to blindness, paralysis and slow external communication. For some reason Picard still trusts Data to help destroy the facility, even though he's been infected by their virus. Luckily Data's suggestion and Picard's 'feeling' that the civilisation weren't militant. If Worf had been right about military applications Data would have been a massive liability.
When Worf carries Data to Engineering there's little Geordi can do and at one point it looks as though Data dies. Geordi closes his eyes with the close-a-dead-person's-eyes movement that everyone on film and TV seems to know. Then Data sits up, because death isn't the same thing for him, and seems fine except that he can't remember anything that just happened. 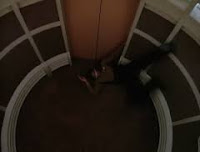 Geordi realises that the Enterprise got a virus from the Yamato, and that the exploded ship got it from the alien probe. Comms go down just as Geordi tells the Captain to destroy the probe, so he has to run all the way to Bridge. The trip is difficult because the turbolift goes haywire and Geordi is thrown all around. At one point he loses his visor in the lift and it looks like there'll be a Velma moment, luckily he finds it just before the doors open and he is literally thrown onto the Bridge.
When Data is brought to Engineering Geordi thinks he's dead. When the android revives without his recent memories Geordi realises that his system rebooted and dumped the corrupted memory. Then Geordi realises they can do the same thing with the ship, though it'll mean a full shut down. Riker is concerned about the shields being down while they're facing a Romulan ship, but not about life support. The whole thing is accomplished really quickly and without any of the inconvenience you'd expect of rebooting a starship that contains your entire environment.


Security Breach
They really need to upgrade their firewall and virus protection. Also they should be more careful when sharing files.

No Magic Here
Whilst bothering archaeologists (which probably isn't his job), Captain Varley was given a super-advanced artefact that looked like a magic wand, but he doesn't know how to work it.
Picard tells Wesley that contemporary sources called the Iconians Demons of Air and Darkness, and claimed they could travel without spaceships. Wesley says that sounds like magic, I agree. When Data creates the gateway they treat it like technology, even though it links to late-20th Century Toronto and ancient Mediterranean ruins.

Staff Meetings: 4
1. Geordi's report on the explosion is rich in technobabble. The seal was broken, the forces of light and dark met, and the prophecy was fulfilled... or something. Basically the problem was internal, and the Enterprise could have the same flaw. Troi suggests withdrawing now they know the Romulans weren't involved, but Picard doesn't want to move until the Enterprise is checked (unless an ancient mystery presents itself, of course).
2. Wesley asks Picard about the Iconians, he thought they were a myth. The Captain infodumps. Wesley actually came to talk about the ship explosion, it really shook him. Picard orders tea* and gets flowers, signalling the start of the system problems.
3. Geordi explains that the probe tries to reprogramme systems, like a virus. The Enterprise caught it from the Yamato's logs. Data reports that Pulaski is sending medical teams through vents because the lifts aren't safe.
4. Picard reckons there should be instructions near the launch site on the planet and says he'll lead the away team. Riker objects but is overruled.

Won't Somebody Think of the Children?
Picard goes into the dangerous Neutral Zone with the entire ship, when he could've just taken the Battle Bridge (Varley did the same thing, they really are similar). Picard also doesn't separate the saucer section when it seems like the engine might explode. He stays in a dangerous part of space, in case moving causes an explosion, but then moves the ship to an even more dangerous part of space even though exploding hasn't been ruled out.
When Riker's in charge he suggest Troi lead the crew in evacuation plans, which he seems to intend as busy work. I assume that releasing the saucer section would be the best evacuation plan, though I appreciate that the system problems may prevent that.

Death by Space Misadventure
Everyone on the Yamato dies in the explosion, crew and their families. Picard estimates it's over 1000 people, which seems conservative.

The End
When Picard is beamed to the Enterprise he tells Riker about the situation the Romulan's are in and it's the first officer who sends the lifesaving information to their adversaries. Picard says that they should move the ship away, in case the Romulan's can't fix their problems. Then he glibly tells Riker that he's being hogging all the excitement on the away missions and suggests that it's just been the same old routine on the ship. He leaves the transporter room, followed by a long-suffering look from Riker. 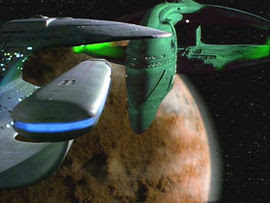 * This is the first episode with Picard's standard order: tea, earl grey, hot. Does it come out cold or lukewarm if you don't specify?
Posted by Catherine Hill at 09:36